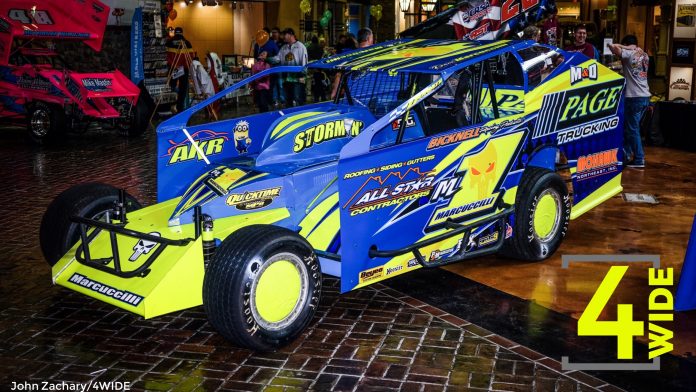 One day after a late winter snow storm in Upstate New York, the Finger Lakes Mall opened its doors for their annual Finger Lakes Speed World Show. Race fans did not let the snow stop them from getting their first taste of racing in 2018. Show goers filled the mall all day, enjoying the cars, and vendors on hand. There was something for everyone from Sprint Cars and Dirt Modifieds to Drag Cars,  vintage race cars, and even some lawn mowers.

Visitors enjoyed some live racing as well with MudBoss racing at Small Addictions R/C, and the very popular Power Wheels race held @3:00 pm. This race is for the youngsters visiting the show, but an adult race broke out soon after the kids finished. Sprint Car driver Darryl Ruggles made an appearance in the adult A-main leading early, but lost the lead to some drivers running a really low line.

Jim Olin has done a fantastic job growing this show each year by mixing in sweet looking race cars, and vendors throughout the Finger Lakes Mall. ESS Driver Dave Axton was on hand with his race apparel business Highside Racewear. The local Girl Scouts set up a table selling their popular cookies. Weedsport Speedway had a booth in center court with info for their up coming 2018 season. CSRA Sprint car series, South Butler Nostalgia Dragway, and “The Land Of Legends” Canandaigua Speedway all had booths with 2018 schedules for the fans.

DIRT Museum and Hall of Fame had a great presence with Jimmy Shampine’s radical Supermodified that changed Supers forever. Sitting next to Shampine’s “ Green Machine” was Pat Ward’s 1996 Show Car big-block Modified. DMHOF also had some vintage fire suites, jackets, and shirts from back in the day of DIRT racing in Upstate NY.


Young racers were well represented at the show with a good amount of Go-Karts from Paradise Speedway, Microds from the Syracuse Microd club, and the very cool looking Quarter Midgets. I would dare to say the future of Motorsports in this area is looking good.

Next to the full size demolition derby cars on display, was an area for the JMW Motorsports, Cow R/C Demo Derby. These 1/10th scale cars can really take a beating.

I spent most of the day walking around taking pictures, and talking to guys that I used to race with 20 years ago. Each year the show seems to draw more cars and vendors, as well as race fans from the finger lakes region.

Mark it on your calendar for 2019, this is great way to start the race season.