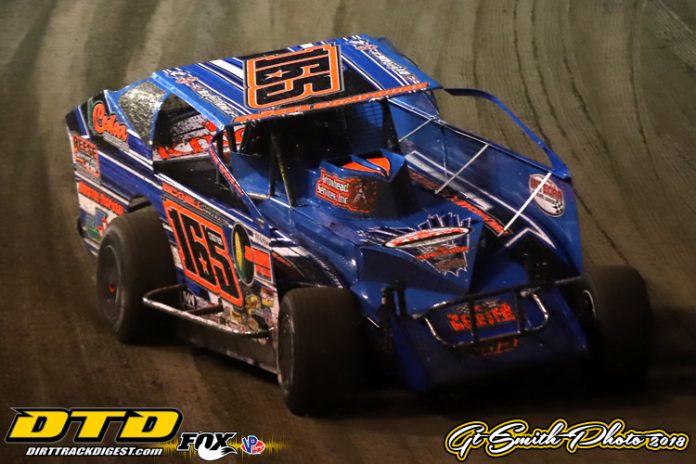 The 2018 didn’t get off to the best of starts for last year’s Sharon Speedway track champion. King’s conclusion to the DIRTcar Nationals came with a destroyed race car after his car got into the cushion, dug the right rear before a wild series of flips. He walked away unscathed but the same couldn’t be said of his car which required a front and rear clip, all new bolt on parts and a new body. It was a tough end to a tough week.

Dirt Track Digest reached out the driver affectionately known as ‘Cooter’ to talk about the DIRTcar Nationals, his successful 2017 and the plans for the upcoming season. Even after the rocky beginning to the year, the almost 27-year-old driver was upbeat as he discussed the frustrations of Florida while being excited about his season schedule.

It was King’s first visit to Florida in roughly eight years. Unfortunately he managed only a best of 18th during the four feature events. The Bristolville, Ohio, driver was testing a new Bicknell combination that he hopes will improve his program on the Western Pennsylvania/Eastern Ohio circuit. “You know how Florida goes, you love it, have a great week or you have a crappy week,” commented King. “This year we ended up with the crappy end of it. We tried one of the new coil over cars that came out. We probably should have parked it after the first night but I wanted to stick with it and see if we could learn with it and get a little bit better. We had a little bit of strength there, just track conditions. When it is wide open fast and a little bit rough, it’s hard for us, especially in a car I wasn’t used to you. We didn’t end the week real good. Just crashed up. That’s just how it was.  A bad week for us.”

The coil cars are the talk of the town, several of the drivers in the field at Volusia Speedway Park were utilizing the combination. Volusia didn’t offer the most ideal situation to test the setup.  The track wasn’t the type of track that those style of cars likes. They are much better on the slicker surfaces of the Northeast not a hammer down track. Volusia was hammer down. Even though conditions weren’t ideal, King felt like he needed to try to learn before heading back home to the weekly grind.

Although 2018 didn’t start the way he had hoped, 2017 was very good to King as he captured the Sharon Speedway track title along with the Modified feature event at the Steel City Stampede at Lernerville Speedway. It was his third title in the last four years at the Cortland, Ohio, facility.

“We’ve won three or four of them now,” said King about the championship. “It’s a good deal. It’s our home track, close to home. We run well. It’s cool to have that. They do the Lou Blaney “Drive to be a Champion” deal as well. It’s not just extra money, but it’s an award in Lou Blaney’s honor. He was the top dog in our area as you know for a long, long time. It’s cool to be on that list. It’s nice being home. We can go 20 minutes from the house and go race and know a lot of the fans. It’s a great place to run and I really enjoy racing there.”

As has been mentioned, for King and company it’s a family affair. He races with his father Rex Sr., his brother Russ helps work on the car along with other family members while also competing in the Late Model division. King admitted that makes it fun, but at times it can also add some stress to the family.

“It’s like anything, when everything is going good everything is great and when everything goes bad it’s miserable,” King said with a laugh. “When me and dad go out there and run one, two, whoever it is, it’s an awesome night for us. If Russ wins in his Late Model or runs good with one of the guys he’s racing with everyone is happy. At the same point, if me and dad go out there and tear one up or junk cars or Russ’ guy tears one up we have a lot of work and no one is happy.”

For this season, King has an ambitious schedule planned with roughly 40 races on it. Those include events at the Sharon Speedway, the Lernerville Speedway as well as being a regular on The Modified Tour. He also hopes to make the trip up to the Niagara region to run at Ransomville Speedway and Merrittville Speedway with the Super DIRTcar Series.

“We are going to run the The Modified Series, the full deal,” cited King. “I want to say they got 13 races with Sharon.  They (Sharon) got rid of the big-blocks but they didn’t. They are having us for all BRP races with more money to win. We’ll do that full-time. I also plan on hitting Lernerville (Speedway) again full-time if we can. Then some Super DIRTcar Series stuff. It’s hard to get away from work and with the kids I have. Hopefully I can do the Ransomville, Merrittville deal again.”

With The Modified Tour the focus, King will have to improve upon 2017. He won one race on the tour at Mercer Raceway Park while finishing second in the points behind a dominate Erick Rudolph who won the other eight races. If Rudolph returns, King thinks they can stay with the talented driver from Ransomville, N.Y.

“He is beatable,” mentioned King. “He’s not like me but he’s in the same situation as me. He’s a way better driver than I am and his dad is very smart. I think I can learn to be a better driver and my brother is just as smart. I think we can beat him. I don’t think it’s going to be easy. He runs coils all the time. We tried this coil over deal to see if something is there. It’s going to take some learning, but I think we can do it. It’s going to take some dedication and changing it up a little bit.”

King made sure to thank all of his sponsors King Bros. Ready-Mix Concrete, King Sanitary, Arrowhead Transportation, Bristol Disposal, Jim Brown Seed Sales and Reese Services Pavement Sealing. They are the ones that help keep his team going.

King and company will see the The Modified Tour open the season on April 14 at Tyler County Speedway in Middlebourne, W.V.