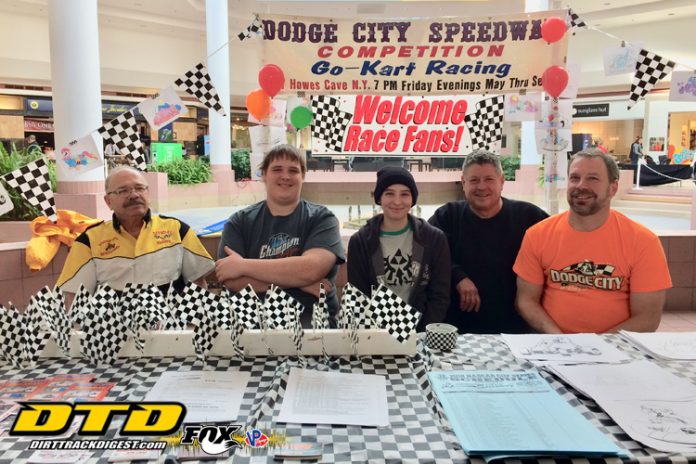 Where tomorrow’s racers are born today. If you’ve traveled along NY Route 7 in Schoharie County you have seen Dodge City Speedway in the small hamlet of Howe’s Cave, N.Y., near two of the county’s most famous tourist attractions, Howe Caverns and Secret Caverns. For many Northeast racers the 1/8 mile track is where they began their racing careers. Where did the name Dodge City Speedway come from? Prior to being a racing venue it was an entertainment venue, Dodge City, a replica of a wild west town complete with a sheriff, bad guys, and shoot outs as part of the show. This year the Montenaro family who currently runs the track will celebrate their 45th year of operation. Prior to taking over the reigns of the track the Montenaro children raced at the track from 1966 to 1974 and their mother and father, Peter and Aurora provided the food for racers and fans. When a call came from local racer, Jim Lighthall, who was running the track at the time, with an offer to take over the track the Montenaro’s took the chance and for the past 45 years Dodge City Speedway has seen many racing career’s launched from the go-kart ranks at the small track to many forms of racing throughout the Northeast, New England and Canada. Just a few of the racers that began their careers at Dodge City Speedway and went on to become iconic names in dirt and asphalt racing are Jack Johnson, Dave Lape, Jeff Trombley, and the late Ted Christopher. These three also claimed many track championships throughout the Northeast and New England, including NASCAR championships.


The heads of the Montenaro family, who began this legacy, Peter and Aurora have since passed but the Montenaros’ still remain devoted to their racing roots and to Dodge City Speedway. Members of the family currently lending their talents to the running of the track are Paul and Anna, Andrew and Leslie, John, Josh, and Grace. Joining the family each week is Terry Tooley of Delanson as an official and Joe Kriss of Schenectady as flagger. At 12-years-old Derrick McGrew, Jr. will begin his first year of racing an open wheel dirt car this season. He will race in the Rookie Sportsman division at Glen Ridge and Albany Saratoga but he is not a rookie to racing because his resume is full of racing accomplishments that began at the age of four in go-karts and one year of Slingshots last season. His racing experience covers many tracks in New York, Pennsylvania, Virginia, Delaware and even Australia. Young McGrew races in many divisions at these tracks which keeps his father, racer Derrick, Sr., very busy maintaining the four karts they currently have in their stable. When not racing Derrick, Jr. also wrestles to keep himself strong and in shape for his racing. He attends Ballston Spa Central School and is currently in the sixth grade. We’ve met many people since we began our writing career many years ago and one of the first was “Rhino” who at the time we met him was a member of Bobby Varin’s crew when Varin was just beginning his racing career. As time went by and we lost track of many of the people we met in the early days, Bobby “Rhino” Rhinehardt was busy making a life for himself and carving his niche in racing. “Rhino” currently lives in Sprakers and owns a home remodeling construction company, Racin Rhino Construction, LLC. He has been racing winged Champ Karts for the past two years and has 13 wins to his credit. He won the 2017 Dodge City championship in 2017, was second in points at Caroga Creek, Oakland Valley, and the Wing Champ Racing Series the same year. Norman“Stormin Norman” Loubier began his racing career in the 1980’s took time off to raise a family and returned a couple years ago. He was at the Wilton Mall car show this past weekend to show off the Pro Stock racer that he will race this season at Albany-Saratoga, one that he built himself. A machinist by trade, Stormin Norman says it’s very satisfying for him to be able to actually make the car he will race against a field full of cars purchased from fabricators.

This weekend fans will be flocking to the Fonda car show at the Rotterdam Via Port for a look at more racers and their cars that will be on display there from Friday, March 16 through Sunday, March 18.