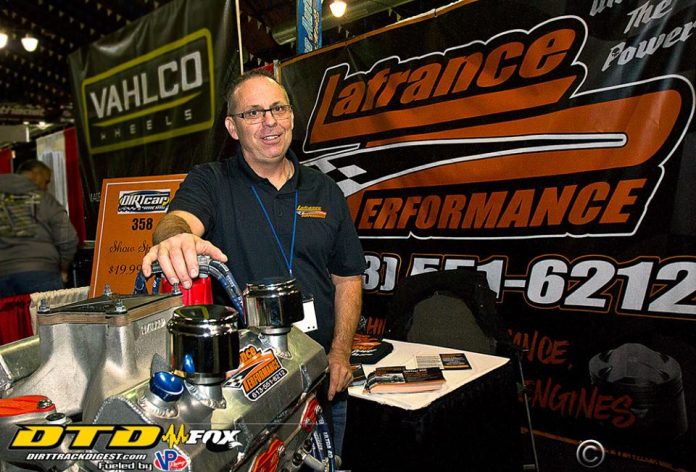 From early childhood, Yves Lafrance was always drawn to the mechanical aspects of a working engine. The son of legendary drive Marcel Lafrance, Yves with his brothers, Stephane and Martin, were always helping around the race shop. When all the chores were done, Yves would then amuse himself in the endless stack of Car Craft and Hot Rod magazines, sifting through the technical articles on engine building. By his early teens the young Lafrance was now swinging a wrench with the best of them. He recalls one day at the age of 14, he decided to put his dad’s race engine together for the upcoming weekend of racing. Marcel was so busy that week with the family business that he just didn’t have time to put it back together himself, so Yves took up the task and reassembled the motor. They won the first night of racing that weekend, impressing the old adept racer Marcel. From that day, Yves knew that engine building was his passion.

By late 1987, Yves was contemplating opening his own shop away from the family racing enterprise and, early in 1988, Lafrance Performance opened its doors.


The then 22-year-old found out quickly that running your on shop was hard work and long hours. As Yves remarked, “in the beginning you have to prove yourself and build up your reputation.”

To improve his skills as his clientele grew, Yves attended training seminars at famed engineer Ray Baker Racing Engines,  getting hands-on-training of the latest technology in engine building, As his knowledge grew, the young Lafrance began producing high-end race engines for the likes of Louie Jackson, Dave Bissonnette and Brian McDonald. With his reputation as a top-notch engine builder growing, the news of Yves’ success caught the eyes of Triad Racing Development a supplier of race engines for NASCAR. Yves was approached in late 2005 to join the TRD Development Team as an engine specialist and who would work within their home shop in North Carolina and maintain their engines at the track. It would be an amazing one in a life-time opportunity to reach the highest pinnacles of our sport, NASCAR, but at the same time, walking away from everything Yves worked so hard for.

After considering his options, Yves decided to take a leap of faith and by early January of 2006, moved to North Carolina to fulfill his new job with Triad Racing Development.

For the next few years, this self-taught engine specialist from small town of St-Alber, Ontario, was living out his dream. Working at one of the primary engine suppliers for NASCAR — teams that run under the Toyota manufacturing banner.

The shop at TRD had full CNC capabilities with numbering and cataloging. There were five assembly laboratories along with four Dyno labs and two Spintron test cells. The company would take in raw casting and machine everything to their specifications in-house. All engines were then tested in one of four Dyno’s. They also tested engines for endurance in one of two Spintron cells. Engines were then disabled and every part was inspected and catalogued. Once done, the engine was reassembled and prepaid for shipping to the racetrack, scheduled for that week. Throughout all of these steps, Yves would follow the engines as they went through the processes, cataloging the engines data for later reference. He would then fallow the engines to the track and their respective teams. Through the weekend of racing, Yves would jump from team to team inspecting and adjusting each engine as the weekend unfolded.

“It was definitely an exciting time,” Yves reflects, “It was incredible working with drivers like Scott Speed and David Reutimann but it was the paperwork that was difficult to adjust too. Everything was logged from the engine block numbers to rocker arms, each part having its own number, each engine performing slightly different.  But this is what you have to do if you want to compete in the big leagues.”

For two years Yves was living out his dream until late 2008 when the global recession hit. TRD Racing had to make some tough decisions, and the first was to reduce salaries by fifty per cent.

With the economic outlook so bleak and salary cuts, Yves made the decision to leave the company and returned home to Canada.

Moving back home to Canada with little and no job, Yves had to start from scratch. At the time he was living in a small apartment with access to a small shed. He recalls rebuilding a motor in this small shed with a dirt floor, no heat and with very little light, quite a change in just a few months.

As time carried on, Yves slowly rebuilt his business.  Over the last 10 years, and reflecting on the highs and lows of his 30 years in the business, he said he wouldn’t change anything, “that it has been an amazing ride.”

Today Lafrance Performance works out of a 6000-square-foot-shop just on the outskirts of Cornwall, Ont.  Last year was quite a successful year for the small shop. It managed a good number of feature wins along with a win in the Cornwall Speedway’s Canadian Nationals series; they also won the Brockville Speedway’s Fall Nationals for 358s along with the Modified Track Championship.

As 2018 continues to unfold, Yves is as busy as ever in the shop and is excited for the season to get underway.  However, he will always treasure those years spent on the NASCAR circuit.