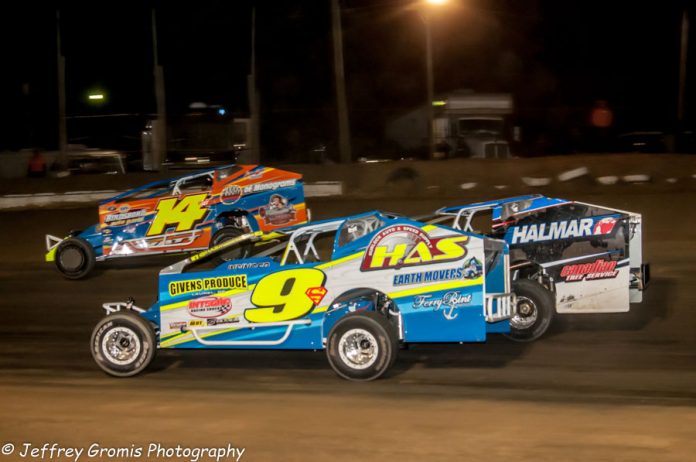 Ryan Watt scored a massive win in the Short Track Super Series opener at the Georgetown Speedway. After 49 laps of hard fought, high speed racing, Watt stood in victory lane with a $6,949 check.

Watt lost the lead on lap 12 to Matt Sheppard, but reclaimed it with three laps left. Sheppard and a lapped car both dove to the bottom of the track, leaving Watt a clear lane to the lead. What was going through Watt’s head when the seas parted before his eyes?

“Don’t lift,” Watt said with a chuckle. “I was trying to run that line when he (Sheppard) was entering on the bottom and cross him over, but I just couldn’t get there. When he got pinned to the bottom, I knew we were good. I was just wide open, it was unbelievable. A lot of times it goes the other way for me, we’re in lapped traffic and I lose the lead, but this time it went the right way for me.”

Just after Watt grabbed the lead back, one last yellow flag flew and reset the field. This meant the lapped traffic that helped Watt get to the lead was now gone, so was Watt happy to see that last caution come out?


“No, well, honestly I didn’t even know what lap it was,” noted Watt. “I didn’t even know it was three to go, but when I passed him and got around and saw it was two to go, I kind of relaxed. I didn’t really want to see that caution because I was probably clear of lapped cars for the next two laps. We were both equal speed, so I figured we would be alright leading, especially on a single file restart.”

Over the winter, Georgetown Speedway went under a minor reconfiguration. Banking was added to the top of both turns, and turns one and two were widened. Watt had loads of laps on the previous configuration, and compared this surface to previous years.

“The banking helps, and it’s something I’ve said before to Brett Deyo two or three years ago,” Watt said. “Friesen and I battled hard for the Beach Blast win a few years back, I was on the top and Friesen was running the bottom. It was a heck of a race, and now it’s kind of back to that. Last year, most of the racing was around the bottom and Brett knew that, but there was nothing he could really do in the middle of the year with his hands tied. He couldn’t make it any better until this winter when he dumped a lot of clay out here and put that banking up there.

“In the beginning of the night it seemed like the bottom was the fast way, then it was the middle, then the top was. Even then, you could still run the bottom, top, anywhere. You could get a run on somebody, slide them, and the racing was great. It was way better than what we had this past year.”

If you didn’t attend either race on this weekend, it only took one photo of the bundled up crowd to see how cold it was. Early in the day on Saturday, cars were packing the track during a light snow. Does it get cold inside a relatively exposed Modified cockpit with these temperatures? Watt said both yes and no.

“It’s not really cold once you get rolling, and the engine heat is coming back at you,” stated Watt. “Once the race was over and I stopped in victory lane, I was freezing. Then it got really cold.”

Cold temperatures, but hot action on track. Speeds on the big half mile were lightning quick with drivers nearly wide open on the cushion. Obviously, the faster a car is going, the more the air going over it matters. We always hear how big of an issue clean air is in NASCAR, winged Sprint Cars, and now even Late Models. On a track as fast as Georgetown, how big of an issue is clean air?

“You’re flying here, and tracks like here, Bridgeport, Delaware US-13, clean air does make a difference,” said the driver with many big wins on the fast tracks. “It really does with these cars, when you get a lot of air on that front nose it helps these cars turn in. You’re in traffic sometimes, and it can be hard to turn. Not even just the clean air, but a clean track makes a big difference too, where you’re not dictated on where to go based on cars in front of you.”

Ryan Watt will take his #14w back to Pennsylvania with a big check and a cool trophy, hoping to carry his hot start through the coming months.