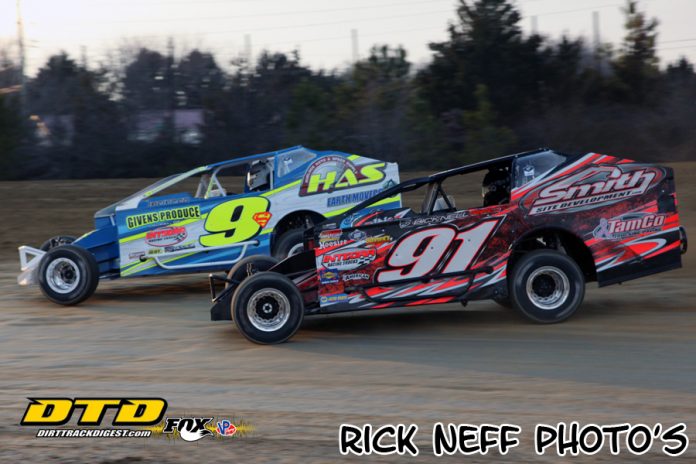 It was a crazy weather day to say the least with snow falling from the sky during warm-ups to having to endure a two-hour rain delay due to a light but persistent rain but at the end of the day all you can say was it was a race you shouldn’t have missed. The track was in  very good shape and the drivers of the Short Track Super Series put on a great show as always.
Boyertown, PA driver and STSS defending South Series champion “Flying” Ryan Watt was the big winner of the 50th ever STSS event and afterwards the crowd favorite was as ecstatic as would you have believed him to be.

“Finally, we were able to get a win here after all of those second-place finishes. I said in the beginning of the week when I saw the trophy that I really wanted to win it and we did.”

What a lot of people don’t know is that when Watt pulled the No. 14w Bicknell chassis back into the pits after winning his heat race the team found out that the bird cage in the right rear suspension had broken and had to be replaced. The team thrashed on the car to get it back together and by feature time they were good to go. For more on Watt’s big win check out writer Bobby Sweeney’s race recap and interview with Watt.

Matt Sheppard never likes to finish second and Saturday at Georgetown was no exception. Sheppard and race winner Watt had an epic battle going on midway through the race with both drivers taking turns leading the 49-lap feature event. Sheppard eventually emerged with the lead and looked to be in charge of the race looking for his first ever win at Georgetown Speedway and in the state of Delaware until he encountered lapped traffic with less than the five to go. Sheppard came up on the cars of Rick Laubach and Tyler Boniface looking to put them both a lap down. Both Laubach and Boniface were racing hard and side-by-side with Laubach on the inside and Boniface on the outside. Sheppard first looked to the outside of both of them but decided against that and quickly switched lanes looking to go under both of them. As Sheppard did that Boniface moved down at the same time and blocked Sheppard allowing Watt to streak around the outside of Sheppard to take the lead and win the race. Sheppard was not happy with Boniface and showed his displeasure when the yellow came out with two to go by running the young driver down to the infield. After war the race Sheppard was still unhappy over the incident.


“I felt pretty good out front there and I thought we had things under control until we got into the lapped traffic but you know we followed him around the top there for two or three laps in a row and then you decide to go underneath him and as soon as I turn left to go underneath of him he turned left to go to the bottom and that was end of it. Ryan went right around the both of us and that was all she wrote.”

As disappointed as Sheppard was with his runner-up finish he still had nothing but praise for his new team and with the equipment they gave him.

“I can’t thank this team enough; this car was really fast tonight. Ryan was really good tonight, congrats to him. Tonight, was one of them deals with whoever was out front was probably going to win and I was fortunate to get out there for awhile and lead until we came upon the lapped cars. This is a whole different deal down here for me with the sandy Delaware surface. It’s not something I’m used to racing on and we didn’t have any clue what compound tire to put on this thing tonight. This place is really a high speed super-fast racetrack and it’s not typically what I’m used to running on and to come out of the box with this brand-new team and run as good as we did tonight definitely gives us a lot to look forward to this season.”

David VanHorn backed up his fifth-place finish in last year’s event with an even better third place finish this season. VanHorn driving the Fred Vahlsing No. 323 charged up from his eleventh place starting spot early on to get all the way up to second near the halfway mark and at times looked to be the fastest car on the track. Eventually Watt got back by VanHorn for second and it looked like the jump the #323 had early on settled out and VanHorn raced to his third-place finish.

“We were really good in the beginning there. We couldn’t really get to the topside to run because the car became a little too tight up there for me and it kept wanting to push the nose so we had to stay more in the middle and the bottom and just did the best we could. Like I said before our car was really fast early on coming from eleventh but after we got up there it sort of started to flatten out some. Overall it was a really good run for our team. I have to thank Fred Vahlsing, Valco Wheels for the great equipment we have and to my family for all of their hard work. Special thanks to my wife who puts up with long hours and I can’t wait to get home and take my son and daughter to see the Easter Bunny tomorrow.”

Unadilla, N.Y., driver Billy Decker made the long haul down and walked away with a hard fought fourth place finish battling numerous drivers throughout the main-event.

“The Smith Site #46 car was a tick off tonight but we hung on all night and ended up with a decent finish. I’ve only been here once before and it was so long ago that I can’t remember when it was but it was a good way to start the season after the rough night we had last night.”

After struggling much of the year last season in the Danny’s Pizza Pizzazz #51, Billy Pauch Jr was looking forward to starting out this season on a much better note. Well, Pauch’s wishes came true as the team finished second in Friday night’s small block race and backed that up with a nice fifth place finish in Saturday’s STSS opener.

“It was a good start to the year for this team after a second last night and a fifth tonight. Danny (car owner Danny Sommeling) stepped up after last year and spent a lot of money to make everything right for this year and we had a good start. We were way too tight early on and I faded back but the track came back to us as the race went along and we were able to work our way back towards the front. I thought I might be able to get by Decker for fourth there at the end but we weren’t quite able to. All in all, it was a good weekend and we are rolling two straight cars back into the trailer and we’ll move on to the next race.”

There were quite a few teams during the weekend who experienced some kind of engine failure during the weekend. The teams of Decker (Friday), Sheppard (Friday) both had engine failures during the Friday night portion of the weekend. Ryan Godown had a terrible weekend when the engine of the Petruska #66 blew in Friday night’s STSS practice session forcing Godown to have to run Searock Fabrications #26 on Saturday and after working his way up into the top ten the motor in that car also broke. Glenn Hyneman’s #126 driven by Jeff Strunk had a motor go bad in Saturday’s main event and speaking with Jeff via text on Sunday he thought he was able to shut the car down in time to prevent major damage. Brett Kressley decided after warmups to load up and leave when the motor in his #19K didn’t feel right. As it turned out it was and electrical issue that caused the problem and the motor is thought to be ok. Jordan Watson also had a motor issue forcing him to exit the race early on Saturday.

With so many engine issues and having one driver tell me that they shouldn’t race this early on in the season when the temps are so cold so as not hurt the motors. I was wondering if there was any merit to his concerns. With a little help from Saturday’s race winner Watt I was able to get a hold of noted engine builder Kevin Enders to get his thoughts on the subject. So, I asked Kevin if the cold weather affects the motors.

“Yes, it does, the engines need to brought up to temperature properly. They need to be pre-heated, they need to be warmed up and what’s happened as time goes by is that guys get less warm-up time on the race track so it’s not they can go out to do some laps and then do your hot laps. Lot’s of times now they put them right on the track and there wide open. So that’s a problem and when you get into those cold temperatures you have to pay particular attention to your timing and your jetting and you need to be conservative. When you get into a situation where you are racing in temperatures of 40 to 45 degrees ambient you should take a couple of degrees of timing out of it and add a couple of numbers of jet as to try and not get yourself in trouble with the weather.”

“The bottom line is yes, you can race in cold weather but you gotta take steps to do it and if the steps aren’t taken properly you can have troubles. What they should have is heaters in the water, heaters in the oil and everything needs to be preheated really good. But you know what, sometimes if there is a problem with the engine it would show up if it’s cold out or warm out.”

Jimmy Horton had the transmission break in his Halmar Racing No. 43 on the last lap of his timed hot lap session. With Horton not being able to fix the issue at the track, he was able to borrow the backup car from his Halmar Racing teammate Stewart Friesen. Horton failed to qualify in his heat race and was added to the field as provisional starter for being in the top five in points at the end of last season. After struggling early on in the feature race Horton pulled the car in the pits…

Mike Mahaney was supposed to be on hand in his own No. 21 but due to the snow up in New York was unable to make it…

Danny Bouc made his debut in the Craig Pondish No. 6 for the season. Using the same car for both nights, Bouc had a decent weekend with a 13th place finish in Friday’s main event and a twelfth place finish is Saturday’s STSS feature…

As always,I can reached at dirtracefan25@hotmail.com or on Twitter @dirtracefan25 for any questions or comments.