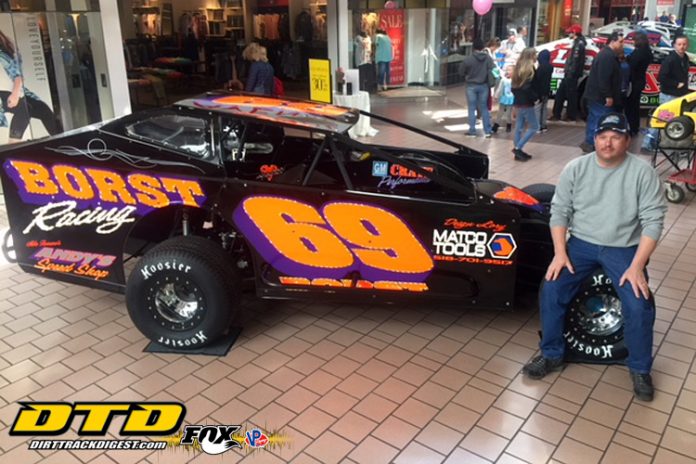 Brian Borst of Schoharie will be back behind the wheel of his No. 69 Sportsman this season at Fonda Speedway. Borst returns to racing after a 15 year hiatus and says his decision came when he was on Facebook one night.

“As I sat there looking through the Mod and and Sportsman Memories pages I said, I got to go back,” said Brian.

His three daughters are all grown now, two on their own and one in college so he had only to run it by his wife, Andrea. She was all for it so he started looking for a car and found a 2010 TEO downstate. It’s a TEO with a lot of Bicknell parts. Borst will return to Fonda Speedway when the snow clears and the season starts on April 21st with the Ice Jam 50 for Mods and points begin for all divisions.

One big difference Borst sees is in the cars. Another is the many new racers that will compete in the Sportsman division at Fonda. “There are a few that I remember,” says Borst, Harry Shaffer for one. When Borst returns to racing this season he will have the help of his wife and daughters, his brother, Kevin and crew members, Jeff Liddle, Mark Camp and Kyle Cornwell. Brian gave special thanks to Gary Marr for painting and lettering his racer. That’s right, Gary Marr, who although retired from his business of painting and lettering now, said he would do it for Brian. Marr is another name from the past that many will remember as one of the best in the business.

This past weekend, Borst sat with his family, wife, Andrea and daughters, Briana, Catherine and Alexis, near his car at the Fonda car show at the Rotterdam Via Port and welcomed the many fans and fellow racers, that attended over the three day period. Also at the Fonda car show Mike Jackson of Swagger Factory Racing Apparel debuted the new Safety Crew Uniforms that the safety personnel will wear this season at Fonda and Glen Ridge Speedways. Terri Morhman was on hand Saturday to show off the jacket of her new uniform and thank Jackson for the great job he did in getting them made. If you notice in the photo on Terri’s left shoulder there is a personal safety light, thanks to the efforts of Nick Squires, fourth turn flagger at Fonda. Nick, who is also training to be an EMT, was scanning through pages on the internet when he came across the light designed for law enforcement and tow truck operators. The “Guardian Angel Light” also has a built in work light for extra help for the safety crews. Thanks to Nick’s excellent internet surfing skills the safety crew members will all have one of these “Guardian Angel Lights” on their shoulder this season. Last season Ivan Joslin of Schoharie lost three motors while racing his Pro Stock and the future looked grim, but up stepped Mike Parillo of Parillo Service who said, “I will sponsor a motor for you next year.” We all know that the motor is one of the most important parts of any racer, unless it’s a pinewood derby car, so Parillo’s offer made things a lot easier for Ivan looking at this season. Joslin will race Glen Ridge and Fonda this season and selected KOD and DIRTcar events. Ivan has four new sponsors this season including Parillo, Hometown Pub & Grub, A.E. Rosen Electrical Co. Inc., and Cystic Fibrosis, Racing for a Cure. All join his already dedicated sponsors on the car; Scentsy Independent NESCOT (North East Stock Car Old Timers) was very visible at the Fonda car show, prominently displaying they Lottery calendars in the center area near the Food Court. Manning the table when we shot this photo was Fran and Rich Carpinello and Larry Heimburge.

We shot this photo on Sunday thinking we may be looking at the future, as Ronnie Johnson returns to Lebanon Valley this season. The next time John Stanley interviews Johnson may be in victory lane at The Valley. It won’t be a first; Ronnie has two victories at Lebanon Valley.

Please note that the Kingfish/Stewarts car show will be held April 8, from 10 am to 3 pm and according the Mike King who is organizing this for the second year, there will be a number of different car on hand for this popular event. Car show location, Stewarts Shop, Route 20, Nassau, NY.

In closing we thank Bob James of BOBCO Video for the NYSSCA yearbook and CD of the banquet. Bob always makes sure we get a copy when we are in Florida. And yes, we did see the president’s message.

Until next time, please send all news and/or comments to biittig@yahoo.com