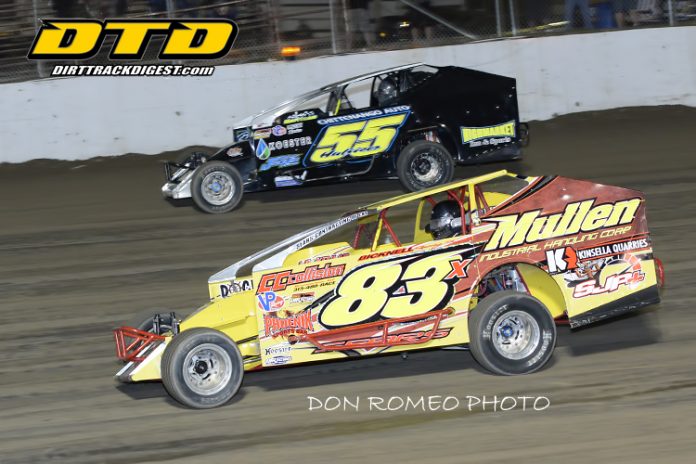 It isn’t often that fans are asked for their opinions, but I’m going out on the limb to seek answers, thoughts and legitimate comments…remember the word “legitimate”.

Racing season is just around the corner in Central New York and it is going to be different. There are new featured classes, new owners, changes in series points and numerous other issues.

I would like fans to answer (answer one or many) include the following:

Do you really care if Mods are big-block or small-block?


Do you really care about what promoters pay in their purse? (This one for owners, driver and fans)

What attracts you to your favorite race track?

What keeps you away from a race track?

Is the fan of today a race fan or a fan of a driver?

Would you attend asphalt and dirt races or are you simply a one surface person?

What are your favorite support divisions and why?

What support divisions could you live without?

How long should you be at a race track for a regular night of racing?

Do you think a promoter pulls the strings on race night or the people in the tower make the call?

What do you expect from an announcer?

How important is price at the gate?

Do you have any ideas of what a unique promotion would be for your local track?

Do you think social media is good or bad for local race tracks and why?

How important are food prices?

I am looking forward to the answers and you can comment on this story or email comments to foley395@hotmail.com.

I see comments all the time in regards to many of these questions, but I am interested in what a true race fan thinks and not the person who appears to go to the races to find a negative from the moment they walk into a facility.

Being involved in racing for over 50 years I started at a time when there was nearly no racing news in papers and once a week National Speed Sport News or Gater Racing News would be my place to find stories. I was one of those weird high school kids who bought the New York Times to read the major coverage of national and international racing.

Today it is almost too easy to find out what is happening at your local race track.

As the new season approaches I am a bit concerned how things are going to go. Fulton and Utica-Rome shifting to small-blocks is a major change of philosophy, but there appears to be interest. How many cars will show up we will know soon, but hopefully there will be some news releases mentioning more drivers who are planning to run weekly or at least from time to time.

Years ago a Fulton promoter suggested dropping Mods all together and replace then with Sportsmen as the featured division. No one knew if fans would support this and still don’t.

Some tracks have gone to specials only as it simply isn’t profitable to run weekly.

Growing up I went to as many tracks as possible and would go racing five nights a week or so throughout my “got my license” and early adult years.

I was an oval track fan (and still am), but when I was at Oswego I discovered, to my surprise, that many fans there were driver fans. When Jimmy Shampine passed, Eddie B, Steve Gioia and Bentley Warren disappeared so did several of their fans.

I’ve seen asphalt fans insult dirt racing and vice versa. We simply don’t have the number of fans anymore to be so segmented.

I’m not sure that dirt track racing is like that, but their was Hearn, Sheppard, TMac, Decker and many other fans out there. I wonder if they are fans when and if those guys aren’t there?

Racing is packed with questions and I see opinions on the internet. Some opinions are well thought out and some are more like a person’s IQ is equal to their shoe size, but everyone has an opinion.

I’m reaching out as I want to know what drivers, owners, crew members, promoters and fans think.

I hope this will provide some interesting insight and will follow this column up from time to time with some of the comments. These might also allow me to generate stories that are a bit different from the regular weekly driver interviews. I’m always trying to find a different angle on racing to hopefully keep or maintain the readers’ interest.

Join in and give me some feedback. I’m sure there might be some promoters or race officials who might also find the comments interesting.

Been told Shane Andrews will be back doing more Super DIRTcar Series races this year. Don’t know how many, but I got a feeling many in Central New York…

Tyler Bartlett is putting together a solid schedule for Can Am..

Tyler Thompson, a regular in the Fulton Sportsman division, is heading to Oswego to run one of the Ray Graham owned supers this season. Nights off he will be back in the Sportsman. He also will be doing quite a bit of racing…

Mike Maresca was in George and Alabama this past weekend in the Lucas Oil Late Model Series. He qualified at ‘Bama for the main-event…

Still no definite word on what Adam Roberts, Matt Hulsizer along with the Sears. Hopefully, will hear soon…

Not sure what Jim Witko is doing as he is a hard person to find. He possesses no social media presence. I hope he still runs Brewerton, but the days to two pay checks for the weekend are over as far as Fulton and Brewerton…

Lowell Zehr sold his cars to guys who indicated they would run those Mod Lites at Brewerton. Lowell has walked away, but still supports the class…

Not much this time so send along news and comments to foley395@hotmail.com