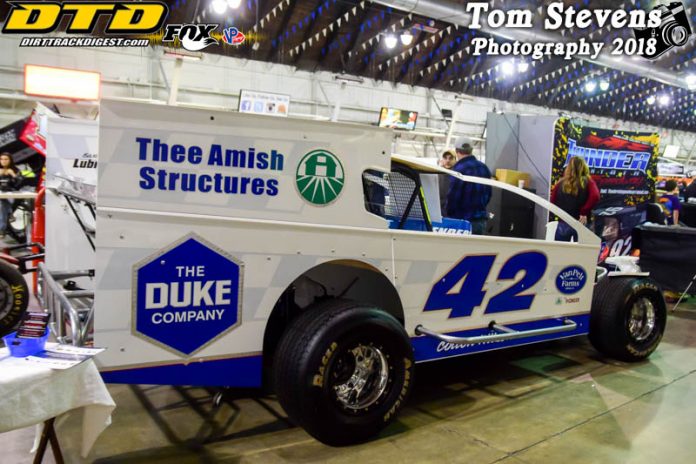 Delores and I took a shorter road trip this past Saturday as we headed to the rebirth of the Speed Sport Showcase being held in Scranton, Pa., at the former Ice Box building. The presenting sponsor came from the fine folks at Anthracite Auto who deal in new and used auto parts and they had a small display at the show. It was the first time in 20 years that the show has taken place anywhere in Scranton and it was well received for the return.

The original show was the brain child of Dick Longstreet, Reed Miller and Steve Post. After the last show was held after many years in the area, the area has be silent until this past weekend. The new show promoters Tony Frable, Nick Petrilak and Bryan Chase have set the stage for hopefully a great show in the area for years to come after what appeared to me as a very successful show. There is room for growth and ways to improve the show but for the first production it seemed to run smooth and folks seemed pretty happy.

Unfortunately I didn’t make it back on Sunday but Saturday was a fun day and I need to give the promoters props for the show and a huge thank you for the courtesies for my wife and myself. Also was happy to share the microphone on Saturday to keep my record intact of working every show in some capacity from its inception.

I will right here say congratulations to all winners at the show as in my eyes your all winners for being their by exposing your sponsors on your race-car or for the tracks getting their schedules out. Being fortunate enough to be affiliated with the premier Southern Tier track Thunder Mountain Speedway I want to on behalf of the track give a shout out to our winners there. Colton Wilson with his sleek looking Modified number (42) for the award for most photogenic courtesy of Ink’d Image a business of Bryan Chase one of the shows promoters. Also the beautiful looking Street Stock of George Miller Jr. (77) winning the Best Appearing Full Fender Car courtesy of Stone Brother’s Automotive. Miller decided to race Thunder after the Oakdale Mall show and comparing the purse structure. Dan Burman also had his Best of Show at the Oakdale Mall winning Sportsman on display at the Thunder Mountain booth. Thunder Mountain wants to say thank you to all the race-car owners that supported them in all three of the race-car shows and to the many throngs of racers and fans that we all had a pleasure to talk with and show their support to the track. THANK YOU!


Highlights of the Show: The Moc-A-Tek Reunion that was held was much bigger than I thought it might be. It took a little time to get started but once the chairs started filling up it was well into the third hour before they were done. As it went along the help started adding to the original 20 chairs that were set up. It was done as a round table discussion and listening to some of the stories was great and I could listen to stuff like that for a long time. They had folks from the early days up until the final days in 2004. Drivers, announcers, flaggers, club members and photographers shared in stories. I need to say thank you for the organizer of this great event Justin Beltrame as he has a lot of the history of the now defunct speedway. Justin emceed this event and called on all that sat around and asked them to please tell a quick story of the track that they had memories off to share. Nice Job!

Another one of the highlights was the first time production of the Miss Speed Sport Showcase pageant. All the girls in it were very beautiful and very respectful and came off without a hitch. It was run under the direction of Tiffany Tyers Productions as she orchestrated the show. It was emceed by the legendary Mr. “Hollywood” Alan Rudalavage. The contestants competed for a remarkable $1000.00 check and the prestige of being the first Miss Speed Sport Showcase. The main sponsor of this event was from an on-line business known as Billie Wech Younique Cosmetics. There were associate sponsor’s that I will name a little later in this column. Microphone and the DJ service was thanks to George of George @TintThis. The runner-up and second runner0up I apologize as I left my notes of the show in my pocket and they got disintegrated in the wash. The new Miss Speed Sport Showcase is the very lovely Taylor Fullin. Congratulations!

My final highlight I want to mention is the tribute table set up with many of the cars that were driven by the late Dick Longstreet in his very illustrious career. Also the Pace Truck that will be used in the Dick Longstreet Memorial Event that is slated for June 22 at the Penn Can Speedway. More on this later. The truck has sponsors coming on board on the truck with the truck coming out of Nunzi’s Automotive Sales & Service business. It will be a Modified event to honor the patriarch of the Longstreet family Dick and the family put up $500.00 for the Best Appearing Car of the show and man was it a beauty. The winner of that award was the immaculate Modified (41) driven by Brian Puckett.

Among The Missing: The talk of the show Saturday was the absence of the Penn Can Speedway. I asked Nick Petrilak when I got there after a quick walk through. I heard a spot opened a couple of days earlier and he told me that was the cancellation as Mr. Borger called and said he was done with Penn Can. Now the question is who is stepping up and I heard a few rumors but nothing concrete so I won’t speculate. I do know that other area tracks will be the winner as the competitors scramble on what to do or wait it out. The problem that brings out the sponsor’s want you to be running your car some where for the exposure and if you get established at a new track especially if your going well it will be tough to go back.

Hopefully I got them all if I missed any please accept my apologies and don’t hold it against the show organizers. Also on their behalf a huge thank you to all that helped in some way by selling tickets, food vendors, working a door, doing cleaning and helping in set-up and tear-down and to all the fans, vendors, and car entrants for making the show a very fine success. I do want to give a big shout out to the gentleman working security as I believed he walked quite a few miles doing laps there all day.

Before closing I want to mention is that tracks are starting to fire open at a more rapid pace so go out and support the tracks. Bridgeport Speedway opens this week with Hand One of the Poker Series. Racing will be Friday and Saturday. I would love to make this one and hoping I get slapped by a money stick before the weekend rolls around. The one I know I will make will be the start of the Bob Hilbert Sportswear Short Track Super Series fueled by Sunoco Halmar International North Series event for the Modified and Crate 602 Sportsman at the Orange County Fair Speedway. The date is Sunday April 8 and the added intrigue of Halmar signing a five year deal at the historic speedway will be HUGE.

Until next time Race On! Leon can be reached for news, notes and comments at leon84@aol.com