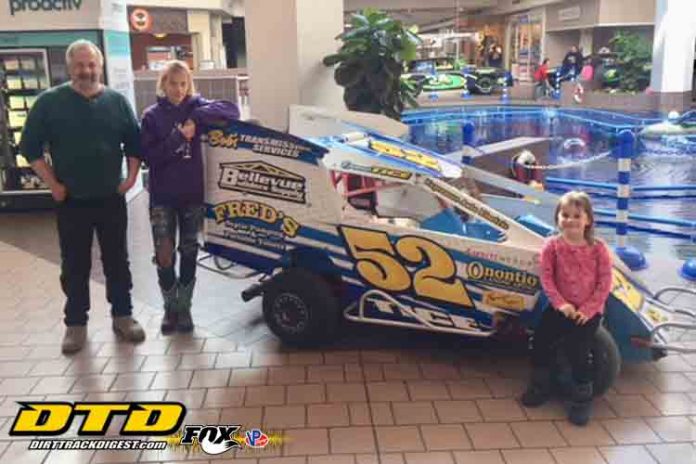 We’ve alway said that racing is a family affair many times spanning generations and the Tice family of Duanesburg is a great example. Grandfather, Joe Tice raced Modifieds or Coupes at tracks like Pine Bowl, Route 66 and Empire in the 50’s. Standing for this photo with his Slingshot car is his son Dennis and granddaughter, Meghan Tice and sitting on the tire is four-year-old, Dixie, Meghan’s daughter who will begin her racing career this season at Dodge City Speedway. Dennis and Meghan already have Slingshot cars that they will race this season at Glen Ridge, Dodge City and Albany-Saratoga when the division runs there. And Dixie she also has a go-kart that will be hers called the Dixie Doodle-bug. How appropriate. Dixie has already got the public relations part of her racing down pat because she proudly showed us a photo of her go-kart before we finished our interview. And Dennis, who according to him, has been racing anything with wheels, since he was 15, is the one that keeps all this running and repaired. And that in itself keeps him very busy. Joey Carnabucci was another local racer at the Fonda car show one week ago. Joey is a second generation driver, the son of 25 year veteran, Carmen Carnabucci. Joey has been racing for a total seven years, taking time off for family, two daughters, ages nine and three. He is a correction officer at the Albany County Sheriff’s Office. He has one win at Glen Ridge and a hand full of heat wins. He builds his own car bodies. He will race this season at Lebanon Valley plus the KOD Crate Sportsman series. Sponsors on the Carnabucci No. 95 are Martin, Harding & Mazzotti, LLP, Lia Cars, and Albany County Sheriffs Union Local 775. It was a surprise and great pleasure meeting Seymour Hayes’ daughter at the Fonda car show on Sunday. We wouldn’t have known she was Seymour’s daughter if not for NESCOT member, Mark Krosky who introduced us. She says that Seymour is doing well but doesn’t get out much. And while we were with her, she called Seymour and we both got to talk with him. He was delighted to hear from us. He told us he would love to be young enough to come back and run the race track again. For those who don’t remember, Seymour was the Compani’s partner when they ran the track. He was inducted into the Fonda Speedway Hall of Fame in 2016.

Many fans have been accustom to seeing Doug Mathewson in the vintage class for the past few years and now it appears he will return to racing a Modified as he has purchased one of Jeff Trombley’s Modifieds to make his return. In the mean time Doug will continue to race a vintage couple, No. 33m at local tracks this season. Doug’s sponsors were showcased at the recent Fonda car show in the Rotterdam Via Port; Hi-Line Performance, JSB Fabrication, 
Boehler Racing Facebook page announced this past week that their driver, Justin Boehler, son of Marie and Craig has retired from racing and the team will close down their racing efforts.

Some of the biggest news of this last week is that Chris Larsen of Halmar International has signed a deal to lease Orange County Fair Speedway in Middletown, N.Y., for five years with an option to buy. Larsen has big plans for the 100th year on the hard clay which will happen in 2019.