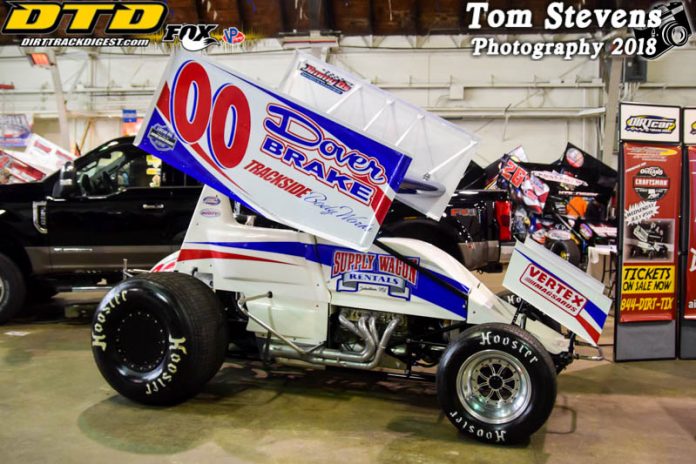 When it comes to auto-racing, progress is the name of the game. 2017 was a very progressive year for Fonda, N.Y., native Danny Varin in the 360-Sprint Car division.  However, 2018 will present him with a bigger challenge: the 410-Sprint Car. Varin said going 410 racing was something he’d been trying to put together for quite some time.

“We were kind of hoping an opportunity would open up and it didn’t look like anything was going to happen, so we just decided to bite the bullet and go ahead and do it,” Varin said. “We’ve invested a lot of time and a lot of money into this deal so, it’s a lot of work, but hopefully in the end it pays off.”

The Dover Brake 00 team had a season for the record books in 2017, tallying seven ESS feature wins and his first Donath Motor Worx Speedweek championship. Strong finishes every week pays the bills, Varin said, and he made it a point to have those almost every race last year.

“It was good. We made leaps and bounds last year,” Varin said. “We were just consistent. We put the car up front 90 percent of the time and had very little breakdowns.”


Consistency is what Varin and his crew strive for every time they are on the track. The key to having the same success in 2018 will be to replicate those good finishes, but he knows that is easier said than done.

“Last year was phenomenal. Hopefully, we can just go back and be consistent this year,” Varin said. “Obviously, wins are what you want, but everything kind of needs to fall in line like that.”

Varin will continue driving 360s in 2018 but will cut out some time in his schedule to get some 410 experience under his belt. He said he’s not planning on following any tours this season, which will give him the freedom to pick and choose races at his leisure.

“We’ll just take it one race at a time,” Varin said. “We’re going to run the same schedule, wherever’s close to home and just hope for a smooth ride.”

Alongside his Sprint car campaign this season will again be a part-time effort in the big-block modified ranks. Again, Varin said he is not committed to any track or tour in particular. Only the big shows that pay well and are close to home will serve as his 2018 appearances in the Magsarus 93 car.

“I’m really happy with what we’ve got planned for this year. We’re just going to do specials – big shows,” Varin said. “Shows that pay, we’ll be there. If they don’t pay, we won’t go. As long as the car is in one piece and things are rolling, we’ll keep racing.”

The Modified campaign will technically make it triple-duty in 2018, and Varin could not be more ready to get started. Overall, he said he is just hoping to enjoy the season and not have to deal with the “weekly grind” of competing regularly at one specific track.

“That’s why I liked the Sprint Car thing, because we didn’t have a weekly racetrack,” Varin said. “We just jumped and skipped around, and I think it makes me a better race-car driver by trying different racetracks, never being in the same place. Now, fortunately, I get to do it with the Modified and the Sprint Car.”

Varin is especially looking forward to getting time in behind the wheel of his 410. He said he has a lot to learn, but feels that experience could help him in more ways than one.

“If I can improve with the 410 and make the car so it feels good and feels right where it should be, I think it’s going to help my 360 program,” Varin said. 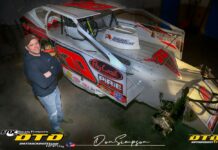 Arbuthnot Ready to Defend his Title at the BOS – DTD Exclusive