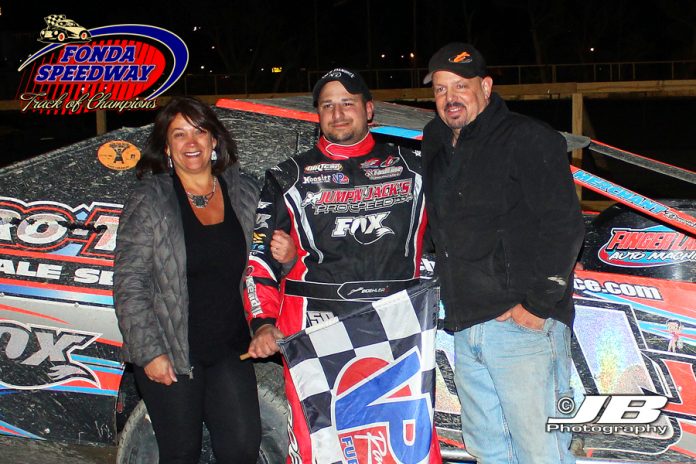 There was a shocking announcement from the Boehler Racing Team just a week or so ago as driver Justin Boehler is stepping away from the sport.

This wasn’t anticipated, but a health situation in his back has ended a promising career.

In an exclusive interview with Dirt Track Digest, Justin addressed his time in the sport, his feelings about stepping away and recognized many of those who have been so important to his racing career.

Dirt Track Digest: How long have you been a racer, how did you get started and where did you compete?


Justin Boehler: “This would have been our tenth year in racing, five in the Sportsman and Five in the Modified. Racing for me started when I was 12-years-old. I saved my money to buy a go kart to race and with the help from my family I got to race for two seasons in the go kart. Over the years I’ve raced at Dodge City (go kart), Glen Ridge (Sportsman-Mod) and Fonda (Sportsman-Mod). I’ve been around racing since I was three years old. Everything I’ve ever driven I had to go fast as I can and it always made me smile.”

DTD: A year ago you had a surprising win in the Fonda opener. What do you recall from that race and what did it mean to you?

Justin: “The win at Fonda last year was a great feeling. We spent the off-season working with Ronnie Johnson and his crew putting in a ton of work on my car. He taught me how the attention to detail means so much and how to maintain the car. I remember going out for the Ice Jam, starting sixth, surrounded by some of the best drivers in dirt racing and calming myself down and focusing on being fast.

The car was very tight in the beginning half of the 50 lap race. I made some passes on Billy Decker and Tim Fuller to get into the top five and on a restart I hit a water sport dropping me back to ninth. Around lap 30 the cars started to come around and was really fast. I was making my way back passing some other cars after Bobby V (Varin) broke, on the restart Billy Decker pushed up the track and I got under him passing him in turn one and on the same lap going into turn three Fuller tried to make an outside move on a lapped car and I was able to get underneath both cars and pass them coming off turn four. That got me into second place. I remember looking up and seeing we had 11 laps left and Stew Friesen had a half track lead. I kept my focus on being fast and over a couple laps I was getting close to him pulling him in. Then a yellow followed. I was thinking this is my chance to try to get Stew at the restart. He pulled me by a lot so I had a lot of ground to make up. I saw his tire explode and I believe there were five laps left at that point. I’m in the lead and knew Fuller was second and thought Decker was third, not knowing he had pulled off the track or fallen back before the restart. I just knew I had to stay focused on being smooth and pulled away from Fuller to take the win.

I remember yelling in joy by myself in the car. It was very exciting and hard work, but it was one of the best feelings in my racing career. Justin Boehler 50 lap Ice Jam 2017 winner. What a rush!”

DTD: What are some of the memories you will carry with you?

Justin: “Growing up I was always around my dad’s car with him and my uncles in racing. I’ll always remember sitting in the stands with one of those plastic racing helmets and pretending to be racing my dad’s car. I will never forget that and it was fun to see kids doing what I did looking up these racers and here I am racing. I’ll never forget the first win in every class because they all mean so much. That is what we as racers strive for. My second Sportsman win was one of my favorites. I took the lead halfway through the race and on the last lap got passed in turn one and going into turn three I was able to get back under him and winning at the line. On top of that it was Pro Tech Scale Night and I set the track record that night that held up for eight years. I’ll never forget the Ice Jam win, my first Mod win with my wife, family and friends and my wife family there. It couldn’t’ have been a more perfect day.

DTD: Recently our father posted that your team was folding. What happened?

Justin: “So over the years I have been in some bad looking wrecks and some bad feeling wrecks. There was one at Malta I was winning the heat race when my spring bar broke and sent me into the wall. A guy behind me hit me full throttle the whole rear of my car was gone and the bottom of my seat had broke. It moved four inches. After than I couldn’t move my neck and went to the chiropractor and everything was fine.

About seven months ago I had a bruise on my lower back and went to the doctor. He said the x-ray was fine so I went on about my life. I had some pain as time went on and my back got worse. Then for about the last two months I couldn’t sleep and was in bad pain. So I went to a different doctor and found out that I have a break in my lower back and a disk degeneration and a disk bulge. After going to three other doctors I had two options. One was to fuse my spine and most doctors wouldn’t do it because I am so young. They said the average fuse last about 10 years before it starts to affect the rest of the spine. The other option is to relocate my spine and make my back stronger with a muscle, but I am very vulnerable to lateral hits and could cause some very bad damage. Due to these facts we chose the one that will make my life better for the rest of my life which meant I had to give up something that we have done for 10 years and love two and spent millions of hours working on.”

DTD: Due to those injuries how difficult has it been for you the past couple of years?

Justin: “For the past couple years I have had some back pain, but nothing that I would have though bad. I have had surgery two days before a race and still raced. I have also been in the hospital for a week, then on Friday left the hospital and went racing. Both may not have been the right choice, but were worth doing for me.”

DTD: How difficult is it to call it a career?

Justin: “I’m 31 years old. Calling it a career is very hard. I didn’t show it that much until we released the news on Boehler Motorsports. When fans and family started to respond it really started to hit home. To realize that I’ll never feel that feeling on going full throttle through turn three at Fonda again is hard to swallow. The whole Boehler family is heartbroken. My family has spent a lot of time, effort and money supporting racing for so many years.”

DTD: Family teams are the lifeline of racing. What does this mean to you?

Justin: “I really would like to thank my mother, father and wife. Without them I couldn’t have raced. They gave me the opportunity to race and supported me from day one. All of the people that worked on my cars mean so much to me. When everyone was done with their day job they spent their time helping me. It means a lot and to all my sponsors that have been with me for my time racing I thank you for helping and supporting me.

Racing has always been a family thing for us. We spend a lot of time together. That means a lot when you have your ups and downs. They are always there to help you look forward to next week. And the friends you make in racing whether they’re good or bad are a bond you will have for a lifetime.”

DTD: Is there anyone else you would like to thank?

Justin: “I would like to thank Pro-Tech Scale Service, Race Printing, Jumpin’ Jacks Pro Speed Shop, Ronnie Johnson, Fox Shocks, Kendall Racing, Swagger Factory, Teo Pro Car, Andy’s Speed Shop, Ed Biittig for all the great articles over the years, Fonda Speedway and all the great memories and everyone that has helped me along the way.”

DTD: What do you think your life will look like without racing?

Justin: “Man, life without racing is hard to believe. I am saying that it’s going to be a big adjustment. First thing I’m going to do is take my wife on a honeymoon. And I’ll spend a lot of time fishing and finishing my house. But, I don’t think I’ll always be completely out of racing. I’ll always have a part in it.”