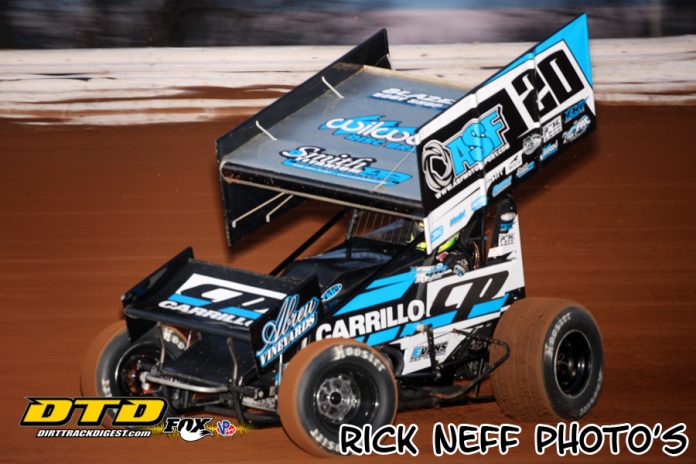 Ryan Taylor had made history before Friday night’s main-event at the Williams Grove Speedway. Taylor, the likeable driver from Mertztown, Pa., was in the history books as a feature winner, but the win had an asterisk to it. It was a win that was labeled a tie with Brian Montieth. Taylor shared all the accolades of that win with Montieth on the frontstretch. That was not the case on Friday night.

Taylor started on the outside of the front row in the 25-lap finale for the Sprint Cars before getting the jump on the pole-sitter Tyler Esh. Although the first start was called off after a red flag for a flipping Montieth, Taylor made the move work on the second green flag as well. He cruised from there, never really challenged to career win number two at the historic facility and his first with no asterisk attached.

“It’s really gratifying,” stated Taylor when asked about having a win all to himself. “It shows that hard work pays off. We tore this thing half apart this morning because we found something that we didn’t like with it. We said were weren’t going to come here unless we were perfect because that is the only way you are going to win a race here against these guys. I tell you what, thanks to my guys Taylor, Colton, my dad and my buddy Mike Carber for coming up from North Carolina to lend a hand for the weekend here. We just want to go racing and have fun. This is the way you can have the most fun at it.”

There was one thing that did disappoint Taylor on the night and that was the fact that someone very close to him wasn’t in the pits with him like she usually is.


“I’d say the biggest disappointment of the night though is that my wife (Katie) isn’t here to enjoy it with me,” commented Taylor. “That’s a torn emotion thing. She’s there by my side for all these things. She helps me work on the race car, helps me letter it and all that kind of stuff. She puts a lot of time and effort into it as well and she stayed home with the dog for the night. I feel bad about that now. I know she’s probably pretty stoked that we got the win regardless, I just wish she was here for it.”

Taylor is usually a mainstay at Port Royal Speedway throughout the season mixing in a few events at Williams Grove when time and equipment allows. This weekend they decided to give the Grove a go and see how things worked out. They set expectations for what they wanted and needless to say they did a bit better.

“We talked Thursday about our expectations and we said we have to be realistic,” mentioned Taylor. “My first thought was to roll out of here in one piece. I said, for me, a top ten would be good for us here tonight and then we can be a top five competitor at Port (Royal) weekly. We definitely stepped the bar up a little bit.”

The race was a caution filled affair with spins, flips and a few flat tires mixed in. Normally that can wreak havoc on the race leader as you don’t know where to start or what line to run. That didn’t seem to bother Taylor at all on Friday as he just kept doing his thing at the front of the field.

“All them cautions in the beginning really didn’t hurt me,” cited Taylor. “I didn’t overthink them that much because I felt like the car made it so easy to hit the marks. It just worked so good. I didn’t struggle or overthink a single thing on all those restarts. I just kept doing the same thing. I didn’t try play tricks or start one spot different than another, I just kept doing the same thing and I never felt any pressure. I figured what I was doing was working so don’t change off of that. I protected the bottom. It felt good.”

Taylor isn’t sure what the rest of the season holds as he is taking a wait and see approach. They’ll race where they can, when they can as they still only have one Rider Racing Engine at their disposal to bolt into their J&J Auto Racing chassis.

“We don’t have set schedule for this season, we are just going to race, have fun and represent our sponsor really well with CP Carrillo,” said Taylor. “We also recently just brought on our newest sponsor in Abreu Vineyards. I’m looking forward to racing around, racing here and racing Port.”