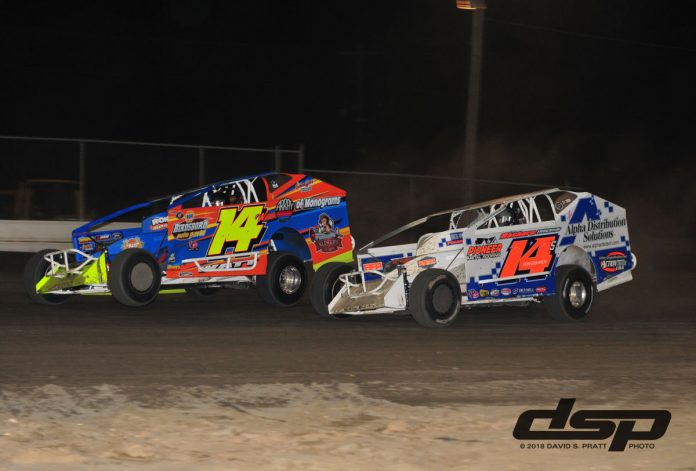 BRIDGEPORT, NJ – Ryan Watt continued where he left off at the end of last year at the Bridgeport Speedway as he easily dominated the 44-lap “Doug Hoffman” Memorial Race on a brisk Saturday evening at the South Jersey speed plant.

Watt made it look easy as he made his way from his eighth starting spot to take the lead on lap eight.  He was never challenged after that. A couple of caution flags did come out to bunch the field back up, but they caused no issue for the Boyertown, Pa., hot shoe as he easily sped out to the lead after each caution period and cruised to the win uncontested.

The car Watt was driving is a 2017 Bicknell chassis nicknamed “Stitch” that the team debuted last season at the Georgetown Speedway opener. The first time out for the car Watt finished a close second to Jimmy Horton and right away Watt knew he had a good car underneath him.  After a few “Watt-esque tweaks” the new car was virtually unstoppable.

Watt went on to have the best year of his young career and with the start he is having so far this year, two wins in two races. Watt is on his way to having even a better year.
Sometimes a driver gets a chassis that just seems to be better than others and just seems to have that little bit of extra speed in it and for Watt this might be the one.


“Sometimes you get a car that just is, and I feel so comfortable with this car that it just might be one of those special cars.”

Watt also battled some rough track conditions as Keith Hoffman had a hard time getting a handle on the new clay having to deal with heavy sunshine and windy conditions throughout the day, but Watt still had praise for the track with what they had to deal with.

“There was a pretty big hole getting into turn one. They had it sealed up pretty good and packed down pretty good, but they didn’t want to till it up and in the heats it was pretty slick and dusty so they had to cut it up and do something. But it’s real soft underneath and they just put the new clay down and with the winter we had and the rain they haven’t been able to work it like they want to, and it has to dry out. We went up to Brewerton last year for their opener and that was brutal and thankfully this wasn’t as bad as that, but all tracks seem to have those issues in the beginning of the year especially with the weather we’ve been having. I heard the track at Grandview was the same way today for their practice. Georgetown is just south enough that they were able to have a pretty good track for their opener, but I think Keith (Hoffman) did a really good job considering what he’s had to deal with.”

With the success Watt had last year and especially at Bridgeport, you know everyone will be gunning for Ron Roberts owned No. 14W and Watt was aware of that going in.

“It’s a great start to the season for sure. Last season we had the best year we’ve ever had so when you come out of the box this year you start to feel the pressure that you have to live up what you did last season. The other guys are getting more of these cars like mine now and it’s make you wonder where we stand but I guess we are still okay after winning the first two races of the year but we still have to keep working on it because once those other guys get more comfortable with this new set-up they will get better.”

With most teams down in the southern area switching to the new coil over set-up. The “Montgomery Missile” Anthony Perrego stuck with their trusted torsion bar suspension on his Teo and came home with a well earned third place finish.

Perrego started the race where he finished in third ran the entire race in the top five and had a terrific battle with Stewart Friesen for the second spot in the latter portion of the race losing out to Friesen with two to go.

“We had a real good car tonight.  We started to get a little too tight the last five laps there so I tried to step out there a little bit and Stew was able to get a good run on me going down the front straightaway and get by, but all in all for the first race of the year here with no practice and a track that I would say had some character to it we did okay.”

Godown and the Atlas Paving Team Bounce Back

After a disappointing start to their season at Georgetown two weeks ago, Ryan Godown and the Atlas Paving No. 66 team were able to bounce back with a solid fourth place finish Saturday at Bridgeport. The team blew up their big-block from last season in Friday’s warm-up session two weeks ago at the STSS opener. They were able to install a new big-block into the #66 Bicknell chassis for this week and the car ran perfectly. Godown was the fastest car in warm-ups and easily won his heat and had high hopes for the feature event but after getting saddled with the twelfth starting spot in the revenge draw he knew it was going to be an uphill battle.

“Starting twelfth was a big factor tonight. I thought we had a very fast car and were able to catch a few breaks on the restarts where we able to start on the bottom, but I cost us a few spots early in the race when I made a couple of critical mistakes and that hurt me a little. I think we maybe could’ve of got a couple of more spots if we had a couple more cautions in the second half of the race but we didn’t and that’s how it goes sometimes. But after Georgetown this was a good deal and we’ll take a solid fourth place finish.”

This was the first time the team was able to get a feel for the new coil over suspension they installed on the car over the winter and the Ringoes, N.J., driver was pretty happy with how it went.

“We changed the suspension on this car so it’s like what all these other guys are running and we were able to get some good notes tonight. That will help us a lot for the next time we race here when the track should be a lot smoother where this kind of suspension really can hook up. The track was rough tonight and that didn’t help but it was rough for everybody. I am looking forward to the next time we bring this car back here.”

For Williamstown, N.J., driver Tommy Beamer to finish fifth at a race with this caliber of drivers in the field is quite an accomplishment. The little team that could was fast all night long and raced with the big boys all 44 laps of the feature to garner an outstanding top five finish. It was quite a race for the Thornton Racing No. 31 team.

“I’ll tell you, this is a great way to start the year. Starting second definitely helped but I’m not going to apologize, and we’ll take it for sure. I’ve been on the other side of the draw more than once and usually draw horrible and start in the back. For a team like ours to get a top five in a race that had the best of the best out there is a really good way to start the season.”

Beamer and his team were another team who switched over to the coil over set-up on their Bicknell chassis over the winter and like others this was their first time running on the new configuration.

“The car was pretty good. We saw all the cool kids switching to it so we figured we might as well give it a shot too. We just set it up like Bicknell told us too right out of the box and it felt good. It was good in the heat and we didn’t do anything to it before the feature. It did start to fall off a little bit there at the end but we we’re still able to get a top five out of it, so we’ll take it for sure. I think this set-up has a lot of potential especially here at Bridgeport where you carry so much speed around the track and if we can adjust on it a little bit to get it better I think we can compete with guys like (Ryan) Watt who definitely has this thing figured out.”

As always,s I can reached at dirtracefan25@hotmail.com or on Twitter @dirtracefan25 for any questions or comments.