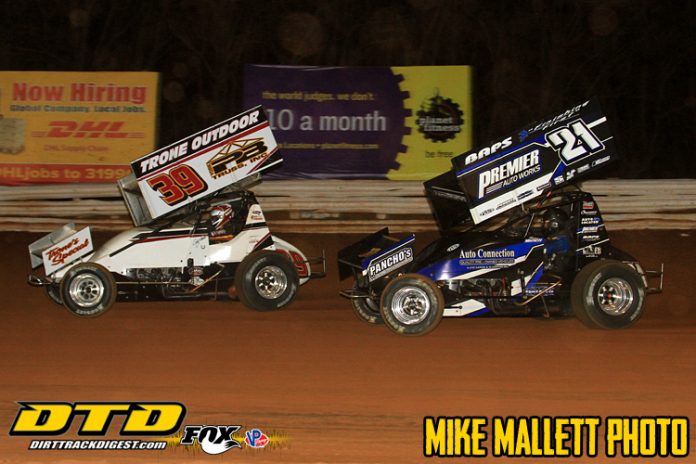 “This feels pretty good for myself and for John (Trone),” commented Haas after the feature from his trailer. “He gave me a good opportunity last year when I didn’t have a lot going. It took us a little while last year. At times we had speed and struggled at times as well.

“John gives us everything we need and we don’t have anything less than the car sitting beside us (Greg Hodnett), so it’s kind of up to us. It feels good to win with this group of guys. These guys were with me when we ran 358’s years and years ago. To get them back in victory lane feels pretty good.”

Like a few others, it’s been a rocky start to the season at the Grove for Haas. He’s had some misfortune which allowed him to earn a starting spot on the outside of the front row. Those opportunities don’t present themselves often so Haas made sure to take advantage.


“This year we started out slow,” he said. “I think I hit the yuke tire down there the first race and then last week we broke a rear caliper. So that got us our starting position. I really don’t feel like I was very good tonight, but somehow it managed to stay up there.”

Haas received nearly constant pressure from Brian Montieth throughout the 25-lap distance. Montieth was never more than a few car lengths behind the entire race. Haas was able to see him taking a peek below him on several occasions. Each time though he was up to the task.

“I saw him several times,” cited Haas about Montieth. “I tried not to over-drive. It got pretty dusty getting off. I felt like throttle control getting off the corner was going to be key. I was hoping that was his downfall. He runs so hard and I expected him to be there the whole time and he was.”

After a rough and tumble start to the feature the laps clicked off in quick succession allowing Haas to reel in the tail of the field. Luckily he caught the lapped cars one at time which allowed him to methodically make his moves to clear them.

“It got pretty spread out,” mentioned Haas. “I caught the last lapped car there and just rolled out to give him eight to ten car lengths. I was hoping it wasn’t going to hurt me, but I really didn’t want to get to him. Everything played out pretty well. I knew Brian was there the whole time and I was expecting that last corner flyer. I feel pretty about the night.”

The win was the seventh career 410 Sprint Car win for Haas at Williams Grove and his 22nd overall which includes his years of dominance in the 358 Sprint Car division.