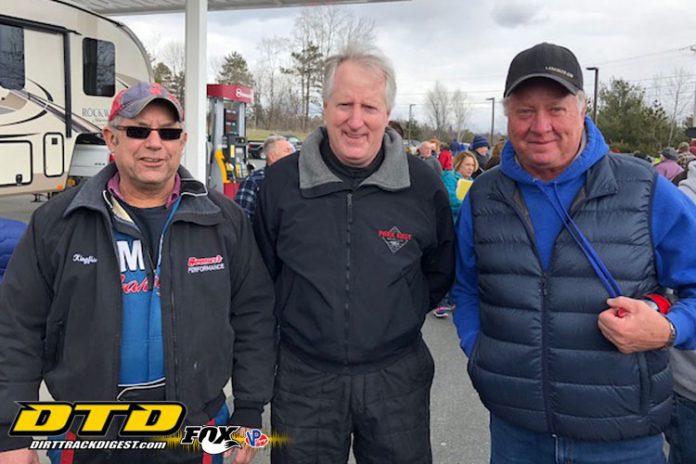 The best laid plans seem to have been dashed this past weekend for many racing events in and around the area. As we approached the weekend we were looking at making our first road trip to Brett Deyo’s STSS event at Orange County Fair Speedway. As the week progressed the weather forecast also progress into another cold, windy and snow/rain event. This caused Brett to wisely pull the plug on his “Hard Clay Open”. The show was rescheduled for Tuesday, May 8th giving the Halmar International promotional team time to work on facility upgrades prior to the May date. The week progressed and the racing events originally scheduled slowly fell to the weather or wet grounds. Fonda Speedway and Glen Ridge both cancelled their practice sessions and even the Albany Saratoga Swap Meet was cancelled and not re-scheduled. By the weekend only one event survived, the second annual Mike King car show at the Stewart’s in Nassau on Sunday. When we arrived the temperature was in the mid-thirties. The car count was similar to the inaugural event last April with one large difference, the number of fans that came out in the cold temps to get a look at the racers that will take to the local tracks when they open either this weekend or the following.

Our first stop was at Rob Yetman’s Pro Stock a beautiful No. 7 and ready to go for the new season. Rob has been wheeling Pro Stocks around New York State dirt tracks since 1998 and has become one to beat wherever he appears. He has a record that can not be matched; winning the last three Pro Stock races at the New York State Fairgrounds in Syracuse during Super DIRT Week and then going on to win the first two at the new home of SDW in Oswego. Rob said it was unbelievable how much Oswego had changed in just one year. Rob was also quick to express that without his sponsors and crew none of this would be possible. Are the Pro Stocks given there rightful place at race tracks and Rob said he didn’t think they were because, “locally we have full fields of cars in the Pro Stock division each week” and that he feels that should be noted. And many fans relate to the Pro Stocks as cars they may see on the road. Rob said he will be back at Oswego this years and will do his best to go for the six-pack.


Next we saw the familiar No. 115 of Kenny Tremont, Jr. from West Sand Lake. Kenny was recently notified that he will be inducted into the Northeast Dirt Modified Hall of Fame in Weedsport, NY on Thursday, July 26th. Tremont said it feels good to be recognized for all of his efforts; his winning career began in 1982 with his first Modified feature win at Lebanon Valley on May 29th and he followed that up with a win the next night at Devil’s Bowl Speedway in Vermont. Since then he has accumulated at total of 357 wins the majority behind the wheel of a car powered by engines built by his father in their West Sand Lake garage. Tremont has 17 track championships at Lebanon Valley, 13 Modified and 4 small block. He also has track titles at Albany Saratoga, Devil’s Bowl, Rolling Wheels, Utica Rome, Weedsport and Glen Ridge giving him a total of 42 so far, because the Sand Lake Slingshot is not done yet. Along with the Tremont legacy at Lebanon Valley a couple more drivers that have done their share of making a name for themselves on the high banks are Mike King and Dickie Larkin who were with Tremont on Sunday for this photo.

This annual event has taken on a more official event status by the presentation of the colors by American Legion Post 797 and the singing of the National Anthem by longtime Lebanon Valley fan and anthem singer, Becca Sweet. As fans and drivers (in their driver suits) stood for the presentation it was clear to all those in attendance that this is now an official racing event that people will look forward to each year. Participants posed for a photo after the ceremony.

Another thing that made this an official event was the presence of two politicians, Rensselaer County Executive, Steve McLaughlin and Jake Ashby who is running for the NYS 107th Assembly seat made vacant when McLaughlin was elected County Executive. We give credit to these two for coming out in 30 degree weather proving they are not just fair weather politicians. News from the local tracks as of this writing on Sunday evening, gives us a practice session this Saturday, April 14th at Fonda starting at 4 pm. The opening day will be April 21st with the Ice Jam event staring at 4 pm. Albany Saratoga will hold a combined open practice and inspection session this Friday, April 13th posted on their schedule as beginning at 6 pm with gates to open at 3 pm. Glen Ridge posted a statement to keep watch of their website and Facebook for updated details. For the most updated information on any tracks check social media and the track websites.