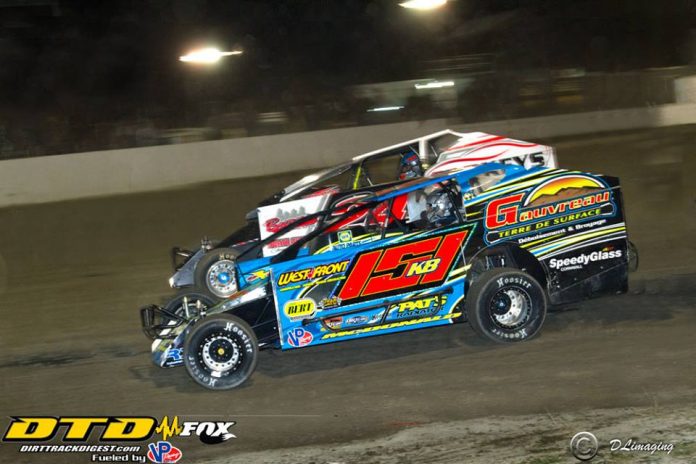 In a matter of a few short weeks, Mohawk International Raceway will open its doors for the 30th time on May 11, with a spectacular season of racing planned.

The track was built back in 1987 by then track owner Dennis White who dreamed of always having a track steps from his front door. He fulfilled that dream opening in 1988. Located on Frogtown Road in Akwesasne, New York, just stones through from the Canadian border, it was only fitting to name the track Frogtown International Speedway. In the beginning, the track had some up and down seasons and struggled at times. But over years, the track has seen some of the best dirt track drivers in the business wheel their race cars around the 4/10-mile track.

The biggest changes came in 2008 when the track was sold to its current owners, the Lazore and Thompson families. Both families invested heavily into the track over several years, transforming the facility into one of the more premier tracks in the northeast.


This year is marking the 30th anniversary, which is shaping up to be an exciting season of racings, with some big events on the schedule throughout 2018.

May 11 will host the first race of the season at MIR. All of the regular classes are slated for their first points race that night, but this will just be a warm-up of what is shaping up to be a great year of racing at the track.

One of the more exciting bits of news recently was the collaboration between Mohawk International Raceway and Airborne Park Speedway in creating a five-race series for the Sportsman Modifieds. Each race will consist of 50 laps, with a total prize of $6,000 for this series; sponsored by Unique e-Cigs who specializes in electronic cigarettes. Race dates for the Airborne are May 28 and August 11. Mohawk will host the events on July 20, August 31, with the series final on September 14.

May 25 will see the first of three 50-lap Memorial Cup races for the 358 Modifieds. Drivers like Danny Johnson, Chris Raabe and current track champion, Tim Fuller, along with a long list of others, will challenge one another for the title. The second round will be on July 6, with the final set to go on the Labor Day Championship Weekend on August 31 with a 75-lap feature.

On June 8, the Empire Super Sprints will make their annual appearance at the fast 4/10-mile track. Drivers, such as last year’s winner Steve Poirier, along with 2017 champion Jason Barney and the young hard charging Matt Tanner and Danny Varin as well as the regular roster following the ESS tour, will put on a spectacular show as in past. Also on the schedule, that night will be Quebec Lighting Sprint tour.

July 6 will host the second 50-lap 358 series race with the Independence Day 50, followed by a spectacular fireworks celebration.

Thursday, August 9, will be one of the biggest shows of the year, hosting the very popular DIRTcar 358 Modified Northeast series with the best drivers from the Northeast United States and Canada. The 5th Annual Pete Mitchell Memorial race for Sportsman Modifieds will also be on the program that night, promising an overflow of cars in the pits for this one-day special event.

The final season’s points race will be the Annually Labor Day Championship Weekend, highlighting the final 50-lap race for 358 Modifieds and the fourth round of the 50-lap e-Cig Sportsman series along with novice Sportsman, Mod-Lites, and Bandit. The night will be capped off with the annual bonfire.

The biggest and final event of the year is September 14 and 15, with the Annual Super DIRTcar Weekend, with the Big Block Modifieds rolling into town on September 15. Fans will see the best in the sport, with drivers such as Matt Sheppard, Billy Decker and Jimmy Phelps, along with a host more racing for the 100-lap prize. The weekend kicks off on Friday, September 14, with the 358 Modifieds 75-Lap Shootout, followed by the final round of the e-Cigs Sportsman series. Also on the card that night is the DIRTcar pro-stocks along with the Can-Am Mod Lite series.

This event is always a big draw for fans and tickets will be available online. Camping will also be available for this event and, as space is limited, reservations are recommended.

The 2018 season is going to be a fantastic year of racing at the Mohawk International Raceway, with some great shows you will not want to miss.