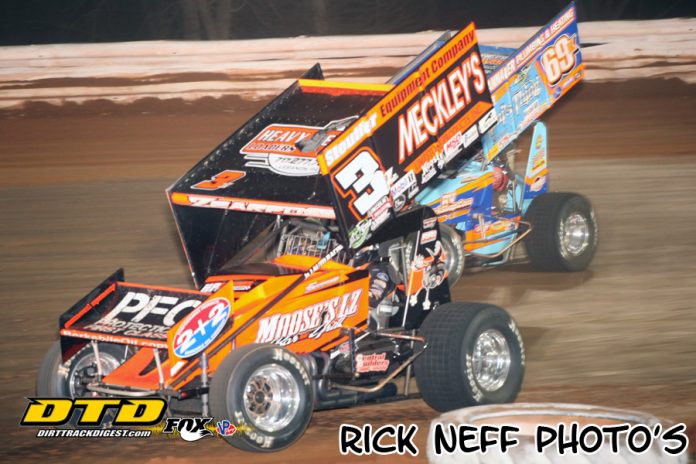 One mistake is all it took for Brock Zearfoss to see his first Arctic Cat All Star Circuit of Champions win slip through his fingers. The Jonestown, Pa., driver missed the rubber on the bottom of turns one and two with only six laps to go. That slight bobble allowed Lance Dewease to fill the hole. Dewease went by and it was over for Zearfoss.

“One of them deals where it is better to run second at that time,” cited Zearfoss. “I was just trying to run my race. I didn’t know when the bottom was going to come in. I’d go down there and peak a little bit, but I didn’t feel it locking down at that time. I was trying to run hard and keep my tires underneath me. I knew it was going to tough race to keep the tire from blowing.”

The two were mere inches apart when Dewease made his move, but they never touched. It was just good, hard racing.

“I knew what I needed to do and Lance knew what he needed to do,” he said. “He stuck his nose in there at the right time. I was going for the win there and I didn’t want to make it easy for him. I gave him just enough room. We were clean about it. He deserved it. I’m happy for second, but I wish it was our first All-Star win.”

Danny Dietrich had a great car Friday night. Dietrich, who has struggled at the Grove in 2018, got up to second and was tracking Zearfoss until he got hung up behind a slower car. That car not only cost him a chance at the win, it also opened the door for Dewease to power on by.

“It’s a shame because I think we should be standing over there,” stated Dietrich. “We had a good car, a really good car. Hats of too Lance, he drove a hell of a race and he was able to get around us. We weren’t able to get around the lapped cars. I’m happy to run third but I’m not happy to be third. It’s good be standing here when there is 46 cars.”

New York 360 regular and former USAC Rookie of the Year driver Coleman Gulick indicated on Friday night that he plans an all-out assault on the dirt portion of the USAC Silver Crown series in 2018. Gulick, of Binghamton, N.Y., has run a handful of races in the past in the division and is looking forward to running the series in 2018.

“I just want to get some more experience,” stated Gulick. “The cars are bigger and I really like running the longer races.  It gives you a chance to get in a rhythm and make some progress.”

Gulick has also committed to running the entire tour with the Lucas Oil Empire Super Sprints. He’ll try to wrestle the championship away from Jason Barney and others.

“I’m still kind of kicking myself for ditching out last year to go 410 racing when I was second in points,” commented Gulick. “You can learn just as much in a 360. I like racing with ESS. It’s a great group, it’s close to home and I like having something to chase.”

Ryan Smith kicked of 2018 at Williams Grove in a tough way. The Kunkletown, Pa., driver got into turn one a bit hot at the start of his heat race, caught an inner implement tire and went for a tumble in turn two. His night was over after less than a lap…

Last week’s Port Royal winner, Dave Blaney, was running second in his heat race when he lost the handle and went around in turns three and four. He was unable to make it back into a qualifying position in the heat race…

Rodney Westhafer was involved in a multi-car tangle in the third heat event. Westhafer along with Cale Conley and Ayrton Olsen. Westhafer raced back to a qualifying spot while the other two drivers involved fail to make the show…

The Pennsylvania Posse remains undefeated against the All-Star Circuit of Champions at Williams Grove Speedway.