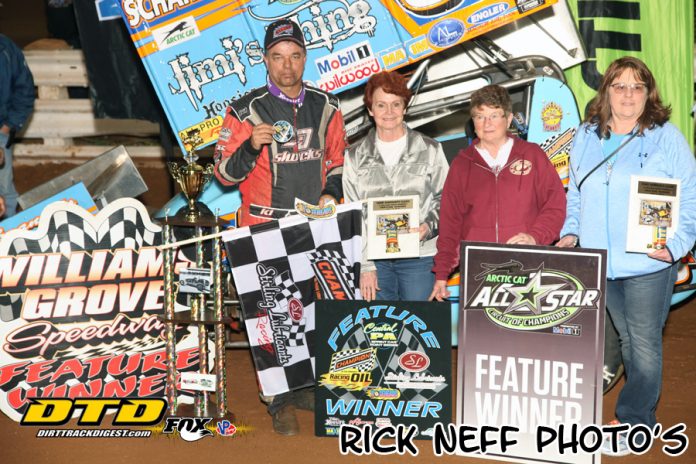 It doesn’t seem to matter where you start Lance Dewease these days as the Fayetteville, Pa., driver will simply find a way to get his Don Kreitz Jr., owned No. 69k to the front. Case in point, Friday night at the Williams Grove Speedway. Dewease started 13th in the 30-lap Arctic Cat All Star Circuit of Champions A-Main event. No one wins from that far back in Sprint Cars. Dewease does.

The track was excellent for the main early with a groove way up by the wall and a one down low. Dewease used both. Then, as the race reached it’s final stages, the rubber came in and Dewease found it. He literally squeezed by race long leader Brock Zearfoss and that was it. The Tommy Hinnershitz Memorial was all over as he powered to his 88th career win at the Grove and his 36 win with the series.

“I’m just fortunate enough to be involved with this deal,” commented Dewease afterwards. “We are just having fun. Even when we don’t win we have fun and that’s what it is all about. They just (Don Kreitz Jr./Davey Brown) work really hard at this. Harder than a lot of people realize. That is why we run the schedule we run. We have to keep it on our budget and that’s why we do what we do.”

Dewease’s car was flawless in the main-event. In the opening stages Dewease worked the high lane after the track crew put down some moisture prior to the start of the C-Main. From there he worked the middle of the track before finally migrating his way all the way down to the bottom. It was a move he made in the final 10 laps of the race.


“It was pretty good in the beginning too, but when you are back there in the dirty air the car isn’t as nice,” said Dewease afterwards about his car. “We had a good race car all night. The race track, in the heat race, you couldn’t pass. I think we could have been pretty quick if we could have got to the front and been by ourselves. They did a wonderful job with this thing. They keep making the right changes. They aren’t afraid to make a change when it’s not quite right. That’s what they do.”

By the time he got to second, everyone watching knew where he was but he didn’t. Starting so far back and with limited cautions, Dewease was just trying to pass as many cars as possible in his march forward.

“I was just trying to get past every car I got to as quick as possible,” stated Dewease. “I really didn’t know who got out front. When they gave me the five to go signal I thought, ‘shit, I’m leading this thing.’ And then I had to slow down because I knew the rubber was not much on these tires. That caution with two to go, when one guys blows one someone else blows one on the next restart. I just wanted to make it to the end. It was gone and I knew it was gone.”

Dewease got by front row starter Brock Zearfoss for the lead on lap 24. He literally squeezed between him and the inside yuke tires coming into the first corner. There was an opening and Dewease made it stick.

“I knew I had to get by him,” ciated Dewease about the lead pass. “At the time I didn’t know he was leading, but he was in front of me and I had to get by him. He slipped up a little bit and that is all it takes. Once you miss the rubber. You have to put your nose in there. It was a good clean race. We raced hard side-by-side but I got position on him and that’s what matters.”

Dewease, the class act that he is, made sure to thank his crew for their hard work helping him find victory lane while also thanking the biggest crowd of the season at Williams Grove for coming out and witnessing yet another victory for this potent combination.

“I can’t thank my guys enough,” mentioned Dewease in victory lane. “I’d like to thank the fans for coming out. We got the best diehard fans in the country. You guys come out when it’s 35 and when it’s 85. You can’t ask for any better fans. I don’t care if you like me, hate me or whoever you like, you guys are still the best fans in the country.”

They might be the best fans and right now they are watching one of the best drivers in the country. He’ll go for his second win of the weekend Saturday night with the All Stars as they head north to Port Royal Speedway.