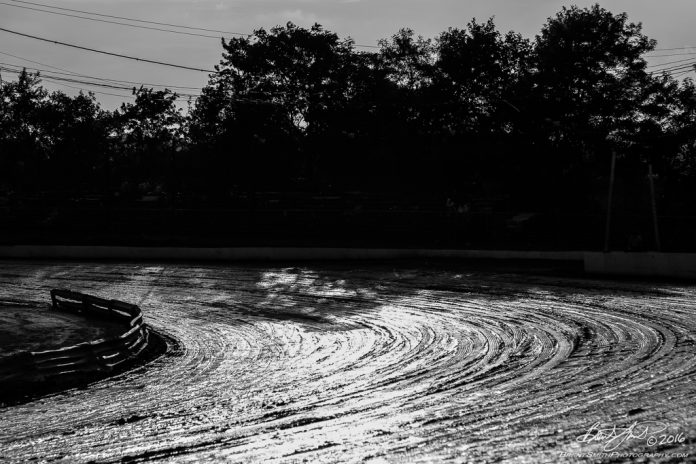 What started out as a beautiful day with temps in the 80’s for most of the day ended up being a cold night when the temperatures dropped close to 30 degrees in a span of less than 30 minutes.

That same analogy could be used to describe Mike Gular’s race last night at the Grandview Speedway. Gular was less than five laps away from winning the biggest race of his career when Stewart Friesen was able to squeeze by on the inside and claim the victory. To say the Boyertown, Pa., driver was disappointed would be an understatement. It was a very difficult way to end the night for Gular who took the lead when then leader Tim Buckwalter dropped from the event early on. Gular tried his best to be upbeat after the race but there was no way for him to hide the huge disappointment on his face.

“It was a good run for us. I am so happy to have this car to run this year. We’ve struggled on the road so far this year and to come here at our home track and run good is nice. We have a fast hot rod and being able to travel will only make us better at our home track.”

Gular was fast all night and he knew he had some fast cars behind him that would be coming at the end but still thought he had what it took to take the big win.

“I knew Stewie was starting to get close there with about ten to go. I didn’t see his nose yet but I saw all the photographers starting to take pictures and I know from my experience that they don’t take pictures of cars by themselves, so I knew he must be very close. I was running the top and it started to go away there at the end. We set-up for the top figuring the track was going to get wide and it did. We have do a little better setting up so we can run the bottom but it was good and I just couldn’t hold off one the best in the business there at the end. I watched Stewie run his heat race and he was the only the only one who could pass on the bottom.”

Most drivers would be extremely happy with a runner-up finish in a big race like this but when you lead a race of this magnitude hoping to take home the first ever trophy given out for the inaugural event you walk away with your head down. It might take some time for Gular to get over this but the good thing about racing is that there is always another race next week and although it won’t quite be the same, it will take the sting out of losing the last one.

“I am lucky to have the opportunity I have this year with this team and I think we are on the right road to having a great year here. This car was our 358 specials car and is a twin to our regular Saturday night car, so we should be okay going forward here at Grandview. This car ran great tonight, we’ll make a few tweaks on it for next time and go from there.”

Long time veteran Frank Cozze and the hottest driver in the early season Ryan Watt put on a show for the ages for the last third of race. Watt was running fourth at the time when Cozze tracked him down and started to pressure Watt for the position. Each and every lap Cozze would put the nose under Watt going into the turns but Watt running his patented outside line refused to yield and would power back by on the outside coming out of the turns to regain the spot. You see this quite often during a race but it usually only last a lap or two. Not this time, the two drivers battled back and forth for close to 15 laps and never touched each other once. It was a battle you had to see, but it was hard to keep an eye on this battle as you had the race for the lead heating up as well.

Afterward as I talked to both drivers after they were done going over their battle with each other.  It was apparent how much fun they had racing against each other. Although they would‘ve rather had that battle going on for the lead it was still great to hear both drivers praise one another afterwards for their good efforts.

For a driver to be so happy afterwards after not winning Watt was quick to talk about his battle with Cozze.

“Man, that was fun. I was just over there talking to him about it. He gave just enough room every lap. I mean there wasn’t much room between him and the wall and it went on like that each and every lap for what, around 15 laps. Frank was so funny when I was talking to him, he was like ‘Man, that Watty won’t give up, I was freaking by you, but you just won’t give up.’ Man, I will tell you that was a lot of fun.”

I talked to Watt earlier in the night and he wasn’t sure he brought the right car to the track afterwards, so I asked him if he thought he would’ve been better off if he had brought his small-block to track instead of the big-block.

“I don’t know if I would’ve been better or not,” Mentioned Watt “I am so comfortable with this car, but the big-block was a little over powered for the track tonight and you really had to finesse the throttle a lot tonight and with the small-block you can get back to the throttle a little quicker and then there’s the weight. My problem was getting into the corners sometimes carrying all the extra weight and it would cause me to slide up and not being able to hold the bottom. With a small-block you can charge the corner a little better and slow up in the middle and then charge off and with a big block it’s a little tougher to do that.”

Cozze was equally as happy when I talked to him afterwards as he described his race with Watt.

“Yeah, we were really going at it. Ryan is a good clean racer and I race guys like they race me. I knew he was going to be out there and I didn’t want to move up on him. I thought I had him the one time coming out of four and just about moved up but I am glad I didn’t because he flew back by me. If I had moved up that could’ve been ugly.”

It was a good run for Cozze who has had a rough start to the 2018 season and it was a run his team desperately needed going forward.

“We’ve had two tough nights so far this year. At Georgetown we about destroyed this car and last night we got wrecked but last night was driver error when I hit one them yuke tires. But, we ran good tonight. The trick tonight was getting to the front as quick as you can because there were a lot of good cars tonight. We weren’t very good in the heat, but we were able to get it a lot better for the feature and it paid off.”

Stewart Friesen has won many, many big races throughout his career but some races are just more special than others and last night’s “Bruce Rogers” Memorial race was one of those races. The Rogers family and Friesen family are synonymous when it comes to race track promotion. Both families have had much success promoting dirt tracks in the Northeast. The Friesen family had the Ransomville Speedway and of course the Rogers family here at Grandview. The full-time NCWTS driver talked about how much it meant to him to have won this special race tonight.

“This is really awesome, like I said coming down here with my uncle in the 90’s when he promoted those races as a kid in the grandstand. Knowing the Rogers family, their great promoters and a great family. This track has so much history and it’s just awesome. Bruce was definitely one of the best promoters in the country and to win the first race in his honor is very special.”

By winning this race and being a past winner of the Freedom 76 race, I joked with Friesen about coming back down in August to win the Forrest Rogers Memorial race thus winning the triple crown of big races at Grandview.

“That’s it! Your right, now we have to get back here to win that race. It’s definitely a race on our bucket list.”

Most of the teams elected to go with their 358 spec motors for the night. By my count and I could’ve have missed a few, only the cars of Ryan Watt, Matt Sheppard and Billy Pauch Sr., had big blocks bolted under the hood…

Two of the Grandview Speedway big four drivers failed to qualify for the big race. Jeff Strunk and Doug Manmiller, both who had high hopes of being the first driver to hold the inaugural failed to make it into the big show.

Strunk was involved a heat race mishap when a car checked up in front of him and he had nowhere to go causing him to have to go back to the pit on the wrong end of tow truck. The car suffered a flat right rear tire and a broken steering box. After making repairs, Strunk started far back in the consolation race. The “Bechtelsville Bullet” made a gallant charge but came up one spot short in his qualifying effort…

Doug Manmiller surely did not have the night he was looking for as well. Manmiller looked like he was going to qualify through his heat when the caution came out with two to go. The last two laps did not go too well for the driver out of Shoemakersville, Pa., and he failed to qualify. Like Strunk, Manmiller made a hard charge through field in his consolation race and like Strunk came up one spot short…

Brett Kressley broke a transmission in his car right before warm-ups started but the team was able to make repairs and have the car ready for the heat race which he won handily. Kressley finished the feature race in the 14th position…

Former Grandview Sportsman driver Jordan Henn made his debut in the Modified ranks and promptly went out and won heat one. Henn completed all 50 laps in the feature event ending with a 12th place finish. A great run for the young driver in his first 358 feature event…

With this being a non-point race, drivers were able to run both Modifieds and Sportsman divisions if they wanted to. Kevin Hirthler (who won the Sportsman feature), his brother Brian Hirthler and Mike Liswoski were the three drivers who took advantage and competed in both classes…

Jon Kellner ended up flipping in his heat and amazingly was able to drive the car back to the pits under its own power. Unfortunately, the damage was too severe for the #57 to continue and they were done for the night…

This has nothing to do with Grandview but congratulations to Billy Pauch Jr winning both openers at Big Diamond Speedway on Friday and at New Egypt Speedway on Saturday. Kudo’s to the kid’s kid… 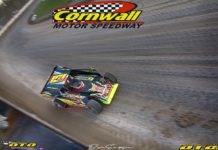