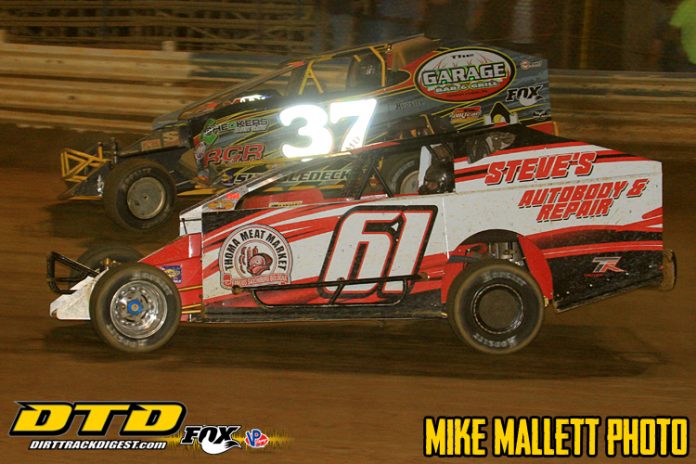 The BRP Modified Tour introduced a new qualifying format for the season opener on Saturday night at the Tyler County Speedway.  For each event, the top 12 in the feature will be inverted based on heat race finishes.  With four heats Saturday, the top three finishers from each heat were inverted putting the winner of the first heat race in the 12th starting position.  Jeremiah Shingledecker took the checkered in the first heat, as a result he got to start on the outside of the sixth row.

“It was definitely all work,” commented Shingledecker about his 12th to second run. “We had a little bit of a brake issue. Once in a while it was there, but most of the time it wasn’t. It wasn’t enough to inhibit slowing down with a caution, but I couldn’t really race with them. A couple of times I jumped the cushion as a result of that. I rubbed the wall a few times.”

Shingledecker made a nice move on the final restart with three laps remaining to get around Dave Murdick and then Phil Vigneri III for the second spot. A well-timed slider put him in front of Vigneri with only Rudolph left in front of him.


“The last restart, Dave (Murdick) and I’m not sure the other guy (Phil Vigneri), they both kind of went down low and that left me the top lane so it worked out well for me,” cited Shingledecker. “It was just a matter of who was in front of you. I think if we could have got out front we could have stretched our legs a little bit more.”

As a result of the heat win and the runner-up finish in the feature, Shingledecker starts off the season as the point leader with the BRP Modified Tour after Rudolph had some tough luck in his heat race.

“This is our best finish here,” stated Shingledecker. “We’ve been down here four or five times and had a good car every time, but we never seem to finish a race. Second is a pretty good start to the season.”

Look for Shingledecker to compete weekly at the Lernerville Speedway while also hitting up each BRP Modified Tour event. He also hopes to do a few Super DIRTcar Series events including The World Finals in Charlotte.

Dave Murdick debuted a brand new TD4 Troyer Car Saturday night. Murdick, from Butler, Pa., began the race from the seventh spot. From there he bounced around inside the top five. He got to second at one point before giving ground late to finish in fourth.

“This is a real good night,” commented Murdick. “This is our first night with our new TD4 (Troyer). I think we could have been second. The car got better as the race went on. It think it is part of getting used to the new car.”

Murdick found a new line late in the middle of the speedway while everyone else was either running way up on the top on the cushion on the fast quarter-mile or down on the extreme bottom. With all the cautions late he wasn’t able to utilize the line as much as he would have liked.

“We found a middle groove that we could run just as fast as the guy on high-side,” mentioned Murdick. “That was going to play in our hand.”

Like Shingledecker, Murdick also cited that his plans will see him at Lernerville Speedway weekly while also competing on the BRP Modified Tour.

King Battles Back for Fifth

Prior to Saturday night, the last time Rex King Jr., was behind the wheel the Bristolville, Ohio, driver got upside down at Volusia Speedway Park in Florida. King had his fair share of issues on Saturday night but ultimately ended the day in fifth.

“Man this is awesome,” said King. “We are not our lid and we don’t have to go to BRP Monday to get this thing clipped. This is a win.”

King started 10th in the feature, got into the top five quickly then inexplicable spun. The culprit was his steering box.

“We had a steering box malfunction,” stated King. “We had a spline strip out. It is what it is. Went to back and had to baby it the rest of the way.”

Although King went to the tail of the field, the 24th spot, he wasn’t there for long as battled his way back up through. He worked the high-side as best he could but couldn’t get into the cushion as much as he wanted to.

“We came back up,” commented King. “It was fun and the track was good. I would have liked to run up a little higher but I’d turn the thing and feel it slip. I just babied it rest of way. A top five is a good thing.”

After the first heat race of the night, a slight rain began falling delaying the program by about 15 minute as the track crew had to come out and run in the surface…

Jimmy Holden was leading the main-event only to have his car go up in smoke on lap 17. He came to a stop in the fourth corner. The race we delayed as the track crew had to dry the fluid laid down on the speedway…

Travis Shingledecker had a tough go of it. He spun on the opening lap then a few laps later Shingledecker got over the cushion hard in turns three and four wrecking the front end…

Rick Richner’s chances at a top five went away with only a handful of laps remaining. Richner got into the wall coming off of turn four on a restart destroying the front end of his car as well.  He came to a rest in turn one…

Garrrett Krummert went on and off the track multiple times. Krummert stated afterwards the team was trying to make adjustments as they were not where they needed to be.