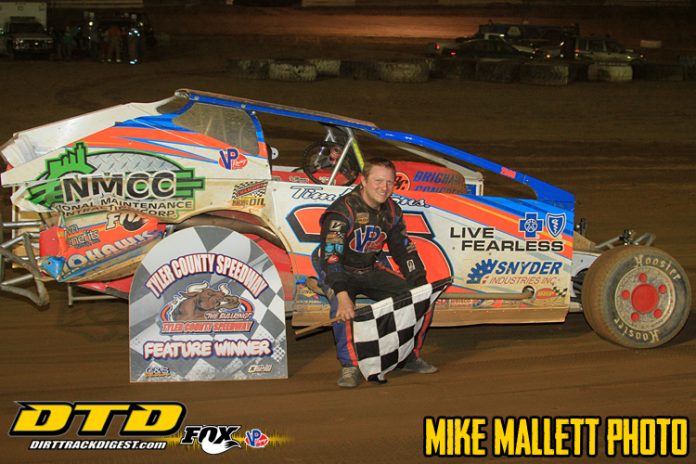 Erick Rudolph put some miles on this past weekend. The Ransomville, N.Y., native traveled to Big Diamond Speedway on Friday night to compete, then headed home before heading south to West Virginia to compete at the Tyler County Speedway with the Bicknell Racing Products Modified Tour.

Rudolph finished in the top ten at Big Diamond before coming from the 21st starting position to win the season opener for the BRP Modifieds. Rudolph, the defending series champion, now has nine consecutive victories with the touring group.

“We had a mishap in the heat race, but we just kept at it,” stated Rudolph. “We looked at our notes from last year. We had an even better car than last year.”

Rudolph had numerous close calls in the feature, but according to him that was expected, especially considering how far back in the field he was forced to start after dropping out of his heat with front-end issues.


“There were a few close calls for sure, especially starting deep in any race,” commented Rudolph. “You have to be looking a couple cars in front of you for sure. There were a couple close class calls. We got out of that one with a little body damage. I’m not sure it’s going to straighten back out. We’ll try to get it fixed back up.”

The early portions of the race were slowed by a few cautions.  Rudolph made sure to take advantage of the restarts. Rudolph was able to pick off a couple cars each time allowing him to work into the top 10 before the lap 10 mark. From there he drove by cars off one at a time. He inherited the lead on lap 17 when the leader, Jimmy Holden, went up in a cloud of steam and smoke.

From there Rudolph dominated the second half of the race, but he had to deal with a couple of late cautions as well which put the entire field on his rear bumper. He survived for the $3,000 payday.

“I knew there would be a couple cautions, that’s how these races normally work,” mentioned Rudolph. “Later on I really didn’t like the cautions. It does something in your head that you prefer not to have them, especially if you feel like you have the car to beat and it’s your race to lose almost. It adds a little bit extra pressure. The car was super easy to drive. We hit it real sweet tonight.”

Rudolph, driving a Bruneau Engine powered Bicknell, earned his first win with that car. He was close on several occasions, including a race at Weedsport that slipped away from him late. He hopes this is a sign of good things to come.

“We’ve had this car for three years and I believe this is the first win,” cited Rudolph. “It’s had a lot of close calls, the heartbreaker at Weedsport there a few years back, but I think this is the first official win. Hopefully it will continue to be good for us.”

Rudolph plans to be in action this weekend at the Outlaw Speedway with his big-block Modified before competing in some small-block events in the coming weeks.