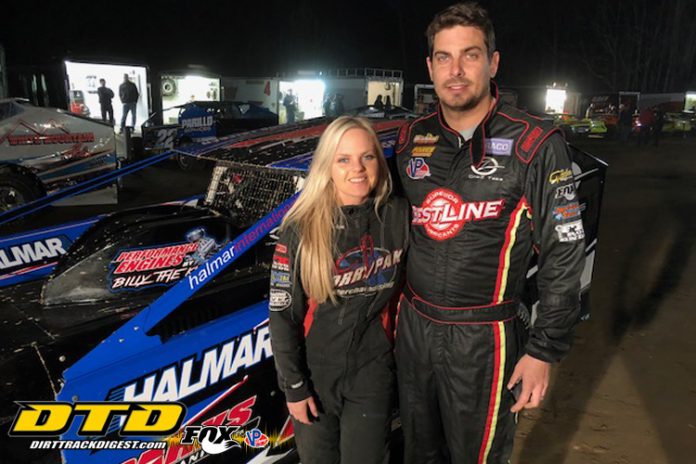 Friday was the first chance to get to a local track to see race cars on the track. When we arrived at Albany-Saratoga for their scheduled inspection and practice session the parking lot looked like they were running a regular show. The pit area was packed with cars and the stands were full of fans. According to Promoter, Lyle Devore there were 140 cars in the pit area to go through inspection and then take a turn on the track to shake down their new or refurbished race cars. What a beautiful sight to see, these racing warriors back on the Malta oval. It may have been just warm ups but the fans were glued to their seats watching their favorite drivers.

We first spoke with Willy Decker who was about to be behind the wheel of the Dodson Construction No. 1x Modified. When asked about his experience on the Malta oval, Decker said, “I’ve never raced here.”

We’ve seen Willy race at many Northeast tracks where he has been successful wherever he goes. Willy has 16 Modified wins and 8 Sportsman wins at Utica Rome alone and many more at other tracks. Last season Willy worked on the two Dodson Sportsman cars driven by Scott Duell and Brian Pessolano. After watching Willy take a few laps on the Malta oval we know he will be one to watch this season.

We, along with many others at the track, watched with great interest the No. 1z Modified driven by Jessica Zemken (Friesen). It was Jessica’s first time in a Modified in over ten years. She ran fastest six out of eight laps in one group of warm ups. The speed of the car right out of the box was understandable because it was powered by a Bill the Kid motor with Halmar International emblazoned prominently on the car. We have watched Jessica race as far back as her go-kart days at Dodge City Speedway and it was great to see her back behind the wheel. While talking with Jessica, husband Stewart Friesen came to her pit area and together they viewed a video of her laps on the track. We expect to see this collaboration whenever it’s possible they can be at the same track this season.


For Stewart his weekend turned out to be much more than warm ups, on Saturday he traveled to Grandview Speedway in Bechtelsville, PA for the running of the First Annual Bruce Rogers Memorial and with over 46 race cars in competition he came home with the win. We don’t know how Stewart keeps straight what he is driving next. Within the past couple weeks he has been behind the wheel of a Modified, NASCAR Truck and an ARCA Super Late Model.

We are certain that if you read our column regularly you know that more than once we have mentioned Don Mattison and his No. 10 Modified. We have a great time talking with this team from Vermont about their efforts each season. Don’s pit area quickly brings to mind that time before the stacker trailers and giant haulers we had open trailers and when you saw one on the highway you knew that a racer was headed to a race track in the area. Don is at the track because he enjoys racing with the equipment he can afford and has no envious feelings for those who are lucky enough to have bigger or better equipment. He simply enjoys being out on the track with what he has.

During the off season Don had the motor rebuilt for his No. 10 and wanted to check it out before the season started so he made the trip for Friday’s practice. While out for warm ups, Don said something happened with the car and his first thought was, it’s the motor. When he returned to the pits he was happy to learn it was the just the rear-end. We look forward to seeing Don and his crew this season and wish them the best.

With the season just getting underway for local racing we want to take one minute to rant about local TV coverage of our sport. For the past week we have heard all about an arena football game being held in the Times Union Center in Albany, which is great for football fans. As a race fan I look at three area tracks, Albany Saratoga with over 50 years, Lebanon Valley and Fonda each with over 65 years; the only sport to continue year after year; try to find anything on local TV channels. At one time the local Fox channel had a weekly show but that was dropped when WTEN Channel 10 took them over. I wish someone would look at this.