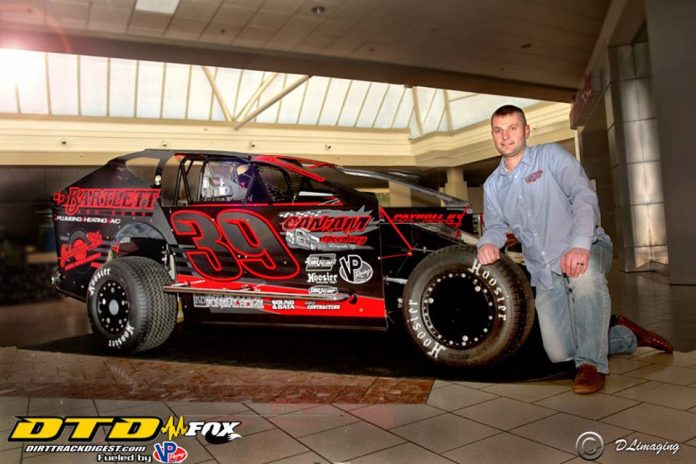 With the opening night of racing just a few weeks away on May 4, the Bartlett family is excited about the upcoming season and the future of this iconic speedway.

By now, most have heard about the sale of Can-Am Speedway and that Tyler Bartlett has become the new proprietor of this historic track, located in Lafageville, NY.

Tyler grew up around the speedway, spending many nights at the track watching his father Dave Bartlett wheel the number 97 Modified around the fast ½-mile oval. This experience left a lasting impression on Tyler, dreaming of one day racing a car.

The road to fulfilling that dream began when Tyler, along with his brother Ryan, began racing go-karts at the track. “At the time, there were close to a hundred karts competing and it was a great family experience along with learning the ropes of handling a race machine,” Tyler recalls.


In 2004, Tyler then moved up into the Modified class, but at the same time, the family business, D.P. Bartlett & Son’s Plumbing, Heating, and AC LLC, were really starting to grow, and by 2008, Tyler decided to put his racing dreams aside to concentrate on growing the company.

By 2015, Tyler was confident that the business was on solid ground and decided to once again get back behind the wheel of his race car full-time.

Having been successful in business, Tyler has now fulfilled his ultimate dream of racing by purchasing the Can-Am Speedway where his racing dream began. As the new owner, he went back to the basics and reflected on the past successes of the Can-Am Speedway. He looked at who were the fundamental players during those years and one of the biggest names was Bobby Thurston Jr. The Thurston family owned the track from 1981-2000, creating one of the best-run operations in the Northeast. Considered “the Glory year of the track,” Tyler committed to bringing this back to Can-Am Speedway by creating a community gathering place where fans can come and see some of the best Dirt Track racing, but at the same time, provide a family-friendly atmosphere at an affordable price.

Tyler explains that he intends to go about the transformation slowly and in a thoughtful way, and one of his first moves is to bring back Bobby Thurston Jr., along with some of his key people.

The Bartlett family then decided to give back to the community by having the speedway get involved with the Children’s Miracle Network. The track will host some of the children during the annual autograph night on August 17, accompanied by a donation — a portion of the general admission.

He then decided with DIRTcar sanctioning to return back to Friday nights for racing. Tyler explains, “this is a good move and part of our vision as there will be no longer conflicts with Brockville and Fulton Speedways.”

In fact, with Fulton going to 358 Modifieds on Saturday nights as there primer class and Brockville and Utica-Rome Speedways having 358 Modifieds, there is definitely more chances of enticing teams to race at Can-Am over the season.

“So far we are confident of a 23 to 24 car field and expect the numbers to grow as the season unfolds,” Tyler explained.

He then brought back Tom Martin to oversee the pit area, along with AJ Baker taking care of all the track preparation.

As mentioned, Tyler, a seasoned businessman realizes, his vision for the track won’t come overnight and it takes small steps to move forward. He explained that this year’s schedule would basically be the same as last year with the exception of a few special events. For instance, the Empire Super Sprint series will be in town three times on Wednesday, July 4, followed by Friday, August 10 and on Friday, September 8. We also have the Big Block / Small Block challenge 50-laps for $5,000 to win, scheduled for Wednesday, June 20. There is also the Border Battle series Friday, June 1 and Friday, July 13. These will just be a few of the special events to be held over the season.

In these days of uncertainty for some tracks, you could definitely see that Tyler Bartlett is well prepared and knows what it will take to move the track forward. With his dedication and the recent moves to get the people need in place, along with some needed updates to the track, the future of Can-Am Speedway looks very bright.