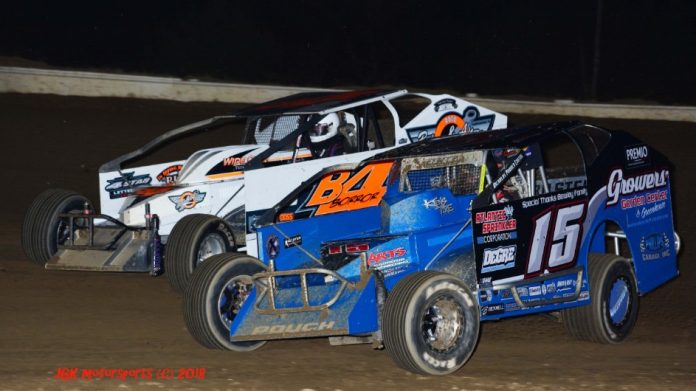 Last weekend Delores and I headed south for some warmer weather and some racing action at Big Diamond Raceway and Grandview Speedway. The weather got pretty good when we were just south of Scranton, Pa., and I knew it was going to be a good night for racing. Delores decided that she would go Friday and stay in the motel room on Saturday. It did stay pretty nice all night long and I knew the dust issue or in this case, no issue as I saw Delores actually watching the Modified feature.

First lets check out the action at the Big Diamond Raceway. Car counts for the night were 32 big and small-block Modifieds, 30 Crate Sportsman, 14 Road Runners and nine Street Stocks on this night. They normally run just small-blocks during their point season with the Crate Sportsman and Road Runners. The Street Stocks run on occasion and I have to say I like the body styles with the big tires on them. The racing was sponsored by Schaeffer Motorsports and they had a display on the midway of some of their products.

The Track: As mentioned above the track was just about dust free all night long. The crew had the track fast and smooth and I would say just about the best I have ever seen it on my visits to the coal region speed plant. The break for track prep was shorter than normal and that crew moves for sure. Well done folks.

Some Invaders: Upstate N.Y., was represented at the track with Eric Rudolph (4B) coming down from Ransomville and coming home in position nine. Guys that ran in the Southern Tier before at Penn Can Speedway were in attendence looking for a new Friday night home. (Note: hear now Penn Can is scheduled to open on May 11 so time will tell if these drivers stay or head back). They are in the Modified division Grant Hilfiger (78) who came home in 14th and he sat out most of the 2017 race season. Frank Yankowski (127), who I believe was planning on running here at the Diamond after some runs there last season, brought his car home in position 17th after a great run early up front then it looked as if the car started pushing some. Frank Porrecca (38xf) and Bobby Trapper Jr. (2) who ran the Can last year were the other two. They came home in position 22 and 23 respectively. In the Crate Sportsman it was 13-year-old Alex Yankowski (84y) bringing home the win and making him two for two on the season as he got the win in his first ever start at Georgetown Speedway a couple weeks earlier. Alex ran Penn Can last year and did get a win up there also. Mike Loney (17D) who also was a Can regular was considering Big Diamond on a regular basis came home 11th after being caught up in a few skirmishes.


Fierce Battles:  In the front of the class for many laps was eventual winner Billy Pauch Jr. (15) and Ryan Godown (26) putting on a crowd pleasing run with just a slight bit of contact every so often. Yankowski had the early lead as mentioned above and also Craig Von Dohren (14s) was hot on their trail. In the Crate Sportsman Yankowski the youngster with a very bright future withstood a hard hit going into turn one around the midway point of the race from the second place car and was able to keep it from going around and maintain the lead. Nice handling job Sir!

Saturday Travel: With the weather going to be great and temperatures reaching into the 80’s it was nice to break out the shorts. Delores and I took a new way for me to the track as I took 61 south at St. Clair of off 81 to 73 into Boyertown and then 100 to the Grandview Speedway. Signed into room after a late lunch and a ice cream cone from Dairy Queen in Gilbertsville,Pa.

Atmosphere:  When arriving at the Grandview you couldn’t help but get excited as not only was it opening night there but it was a high paying opener being run in memory of long time promoter Bruce Rogers. It was sponsored by VP Racing Fuels and it was dubbed the Money Maker as it was paying $7500.00 to win the Modified feature and one grand just to take the green for 50-laps of elbows up racing action.

The Racing:  Mike Gular (2) after inheriting the lead looked like he was going to grab the opening night laurels in honor of Bruce Rogers. Gular kept all challengers at bay and held Stewart Friesen (44) off during numerous restarts but the relentless pressure from Mr. Friesen proved to be to much with three laps remaining. Friesen was honored to get the win in this race as coming from a promoters family he knew the joy and frustration Mr. Rogers had during his long tenure at the track. Gular was heart broken after the fine run but knew it was tough competition and was proud of his ride and believes he has a great season ahead for him and the crew. Craig Von Dohren finished third for the second night in a row. I personally was watching the fierce battle for fourth and fifth between Ryan Watt (14w) and the (4) of Frank Cozze. They raced lap after lap side-by-side with each nosing out the other at different points on the track without any contact, and I believe they had as much fun racing like that as I did watching it. Great job guys!

Car Counts & Some Outsiders:  Car counts stood at 47 for the combination of big and small-block Modifieds and the Crate count was at 30. There were no points for this show so some of the regulars not at the track yet but this week is their official opening night. The biggest name outsider in the Modified was Matt Sheppard aboard the Coffey owned (92s) After a rear flat Sheppard worked his way back for a 12th place finish. King Ferry N.Y., campaigner Mike Mahaney is back behind the wheel of the Breitenstein (14) for weekly competition at the tough Grandview Speedway.

Sometimes You Get Lucky:  Lucky was the case this past Saturday night for Mahaney as they were taking no provisionals as you had to make your way in. Mahaney got in from the consi as he moved up a spot when Bobby Trapper (69) came up light on the scales. I thought they would put in Jeff Strunk as a many time track champion but it was make it in or you don’t race and they stuck to that.

Final Thoughts:  They had great trophies in honor of Bruce Rogers and some nice Money Maker shirts. A big plus for me since my last visit is bottled soda instead of the cups that they used to give you. Many campers were on the grounds when I arrived adding to that atmosphere that I talked about earlier.

More tracks are trying to open and some are still postponing as this weather just doesn’t want to break. Let’s say this week we all do a little sunshine jig.

Until next time Race On! For news, notes or comments you can reach me at leon84@aol.com