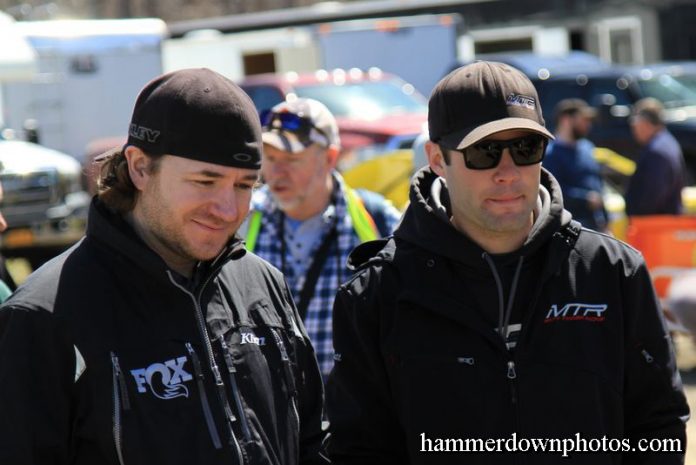 DUNDEE, NY – When Jason Barney pulled into the pit area at the Outlaw Speedway on Saturday morning, he didn’t know what to expect, as this past off season was unlike any that has come before it.

On New Year’s Day 2018 Jason was doing what he enjoys doing in the winter, riding snowmobiles. Unfortunately a crash left him hurt; the most significant injury being a broken collarbone.

The 38-year-old Barney was coming into the season as the reigning 2017 Lucas Oil Empire Super Sprint Champion, had captured six wins on the season to add his career total of 17, and enjoying the good fortune.

That all changed on that New Year’s Day.


“In the back of mind I was thinking if our run was up? We had such good luck the last three or four years, maybe it was time for us to have a bit of bad luck,” said the resident of Brewerton, NY.

In addition while rehabbing the collarbone injury and tending to the growing 87 Speed (Sprint Car Parts and Sales) business it didn’t leave much time for him to do what he needed to do, both personally and on his own team.

“I was fortunate to make it through the accident; I have good family and people around me to help take care of me. Also Brandon (Ahrens) and Case (Marshall) took care of the Sprint Car team, while I took care of the customers,” said an appreciative Barney of those that surround him.

The apprehension and nervousness were weighing on him when he strapped in the No. 87 X-1 chassis Sprint Car.

“I was really nervous when I got in the car; it was the first time since the accident. Been busy with 87 speed, didn’t have a chance to work out and do the stuff that I used to do. Got in the car and strapped in and said ‘This going to be a painful day and a painful season!’.”

Saturday afternoon at Tyler Siri’s Outlaw Speedway dawned sunny, warmer than it has been, and breezy. Death knells to the surface of a dirt track racing in the afternoon. To enhance racing conditions a couple of preliminaries before the ESS 25 Lap Sprint Car Feature, Siri and the track crew reworked the top of the surface.

“I was worried about the water up on top, and made some changes to the car,” said Barney after observing Siri’s track maintenance.

For how apprehensive he was throughout the day, luck was about to show its good fortune. Barney was scheduled to fire in the fourth position, but when outside front row starter Shawn Donath failed to answer the call, it allowed him to slide up to the front row.

Barney jumped out to the early lead, but fellow front row starter Jonathan Preston was able to get by.

“I made changes to the car and should have left it the way it was, I was just hanging on. The car started to get loose and Jonathon got by,” said Barney.

As Barney chased Preston, he knew he had to change what he was doing.

“I found the rubber, I started moving around (on the racetrack), I tried the top, the middle, got one car length, then three lengths,” he added of his pursuit of Preston.

“I had to get to him before he found the rubber, I think he knew it was there, but was a corner late,” added Barney of the winning pass.  “You got to be confident and make good decisions and we were lucky to come out with a win.”

Although Barney won the race, his girlfriend Erin had already won the day for the Barney racing team prior to leaving for the race track.

“When I left the house this morning my girlfriend (Erin) gave me Maxi Pads (Feminine Hygiene Product) she told me ‘If your shoulder hurts you can strap them over your collarbone’, I told her ‘No way am I getting in a race car with Maxi Pads!’.

The call comes up from race officials for heat and the motor, and after getting pushed started and firing his car, Barney makes a beeline to the trailer.

“After heat in the motors, I ran up in the trailer grabbed three of them (Maxi-Pads) and put them over my shoulder, I texted Erin said ‘Don’t know how we are going to do, but you already won the day, it was a great call’,” said Barney of the interesting cushion he used on his shoulder.