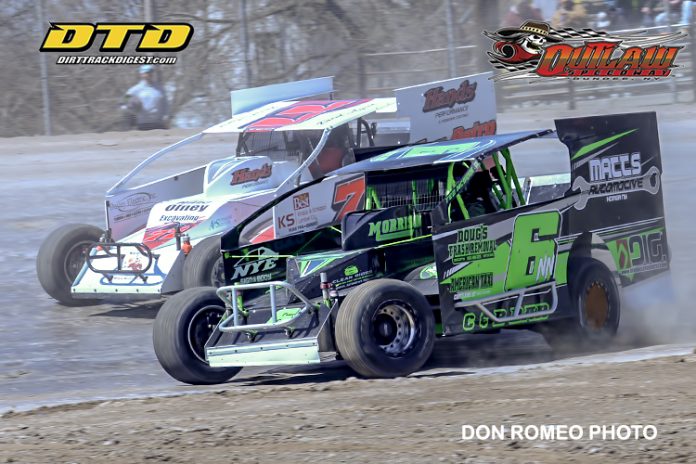 It took Nick Nye a little extra time to get the track on Saturday afternoon as his hauler broke down on the way to the Outlaw Speedway from their Groton, N.Y., home base. Calls were made and a second tow vehicle was secured. Eventually the team made it to the track just in time.

The bad luck on the way there was quickly reversed with a solid effort in the heat race to earn a spot in the redraw. Nye made the most of the sixth starting position scoring a runner-up finish to Matt Sheppard in his first race of the year.

“This is the best car we’ve had here,” commented Nye. “This is a turnaround for our night after our hauler broke down on the way here. We had to call backup truck to come get us and get us here. We got here a little late, but we got here. We’ve always had a decent car here but usually fade when the track gets slippery.  For us to get better and better throughout the night means we are coming out of the box strong and hopefully we’ll have a good season.”

Nye got to third early in his Morrison powered HigFab before hounding Alan Johnson for second. Nye kept looking for an opening as he had a slightly better car than Johnson. Finally, Johnson made a mistake in traffic and that was the opening night needed. Johnson went high and Nye drove by on the bottom.


“We were definitely faster than Alan was,” cited Nye. “The problem was I couldn’t get around him on the bottom. I tried the top and I couldn’t keep my momentum. I went back to the bottom and hoped that someone wouldn’t go around us both. As soon as I went to the bottom he went to the top. I was better than he was and stuck it in there and prevailed.”

Slip Up Moves Johnson Back

Johnson was a strong competitor week in and week out in 2017 at the Outlaw Speedway battling Matt Sheppard much of the season for wins. On Saturday it looked like it was going to be another one-two Sheppard Johnson finish. That was until Johnson made one mistake. He tried to go high when he should have went low.

“I never dreamed he was that close,” stated Johnson of Nye. “I just slipped up a little bit. I was going to try and go high and swoop down low on that lapped car there. I went a little high and that guy was right there and I was like ‘ah shit.’ He was a little better than I was anyways. Obviously if I had stayed low he wouldn’t have went around me, but oh well. It was a good day to start up front and we got a good finish out of it.”

Johnson was utilizing a different style seat on Saturday afternoon and admitted it’s going to take some time for him to make adjustments.

“I hate that new seat,” cited Johnson about his full containment seat. “It has those things on the side and I can’t tell who’s next to me. You get alongside someone and you don’t know if you can slide up or not. I can’t see a thing. No wonder guys run into each other, you can’t see them. We’ll going to have to see if we can make some changes to it to make it better.”

29 cars were attendance for the season opener at Outlaw Speedway…

Track conditions were less than ideal with sunny skies and a steady wind blowing all day causing dry and slick conditions.  The track was much different than last year’s season opener where new clay had been added during the off-season causing the track to be tacky and heavy.  On this day the track was more dusty than usual, but Sheppard understood the situation and the reason for the situation complimenting the track crew for their hard work.

“It was a challenging track for everybody,” cited Sheppard.  “Tyler, his staff and crew did what they could with all the cars here.  They were in that tough predicament.  If you put a lot of water on it the track tears up and everyone is mad at you.  Then if you get a sunny, blue sky, windy day and its dusty everyone is mad at you.  I wouldn’t want to be a promoter, but we got the show in.  We were here opening night last year and the track was real rough with new clay and everyone beat the crap out of their cars.  At least it was smooth and easy on equipment.  We’ll take it.”

Bryce Martin had a tough day. Martin spun in hot laps right in front of several other cars. He got the worst of the damage with his frontend being destroyed. He did not return to action…