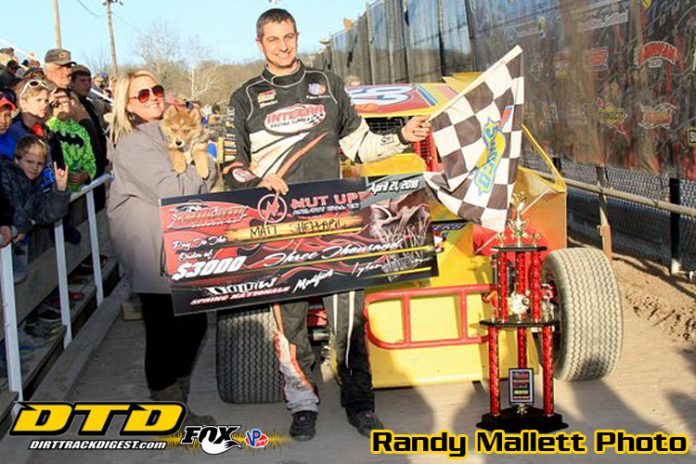 Matt Sheppard has started the 2018 season by putting a lot of miles on his personal vehicle. The Waterloo, N.Y., driver kicked off his season in Florida at the DIRTcar Nationals and since that point has been a mainstay on the Delaware, New Jersey and Pennsylvania circuit competing at places like the Delaware International Speedway and Bridgeport Speedway among others. On Saturday afternoon he finally got the chance to come home by racing at the Outlaw Speedway.

“This is a breath of fresh air,” joked Sheppard. “I don’t think I’ve lifted off the gas for a month here. Today I don’t think I ever got full throttle once, so that was a little bit different. It’s just nice to get racing in the state of New York. I hope the weather breaks here so we can get rolling a little bit.”

Sheppard, the defending track champion, got his New York racing season off on the best possible note as he scored the $3,000 payday Saturday afternoon in dominant fashion. It took all of a lap for Sheppard to get to the lead in his Vic Coffey owned Bicknell. From there he simply checked out. Alan Johnson tried to stay with him and did, but it was only for a handful of laps.

“We had a good car and drew a good number tonight and that’s what we needed,” Sheppard said. “The car is pretty much identical to how it came off the track last October. We didn’t do anything to it. We fogged the motor, backed the rockers off and put it over in the corner. We fired it up this week and brought it back. It was a really good car.”


Sheppard’s advantage over the field on Saturday was his ability to get through the corners. While others had to slow down to glue their cars to the bottom, Sheppard’s car had no issues allowing him to come off the corners strong. That’s how he made several of his passes.

“The car really got through the center of the corner,” commented Sheppard. “I really never struggled with a push or whatever. It doesn’t do anything crazy good, but it doesn’t do anything wrong either. It’s balanced, it turns and gets good bite. It’s just a good combination.”

Saturday’s ride to the track was a short one consider all the traveling Sheppard has been doing. Sheppard discussed his trips to the mid-Atlantic and how tough they can be with the hours of seemingly endless driving on the highway. Fortunately he’s driving for a strong team in Shawn Ward Racing. The money the early shows have paid have made it worth the effort as well.

“It’s been tough,” he said. “The trip down isn’t bad, but the trip home is brutal. It’s like you lose two days. You lose a day and half going down there and then the next day you aren’t worth a crap. Those guys have a really fast race car down there. It’s fun to go down there and drive. They definitely had some good paying shows at the beginning of the year here that weren’t conflicting with anything so you got to suck it up and go.”

The one thing Sheppard is lacking is multiple wins on that circuit. His sole victory in multiple starts in the region was at the Delaware International Speedway.  On another occasion he watched as Ryan Watt stole one away from him at the Georgetown Speedway late in the Short Track Super Series opener.  In every other event he’s been consistent, near the front but is missing something that he just can’t seem to figure out at yet. He believes it’s a combination of things.

“Everything about the racing is different,” cited Sheppard. “It’s definitely nice having a good race car to go down there and hop in, but those tracks are definitely different animals. They are not what I am used to by any stretch of the imagination. Driving wise and car setup wise. The car we are running down there is really fast, but I feel like it’s just a tick off from being really, really, really good. I just haven’t figured out how to make it better yet. It’s a different game down there, but we are working on it.”

It history tells us anything, another win is just around the corner.  Shepard amassed more wins than another other driver, if there is anyone that can figure it out it will be Sheppard.