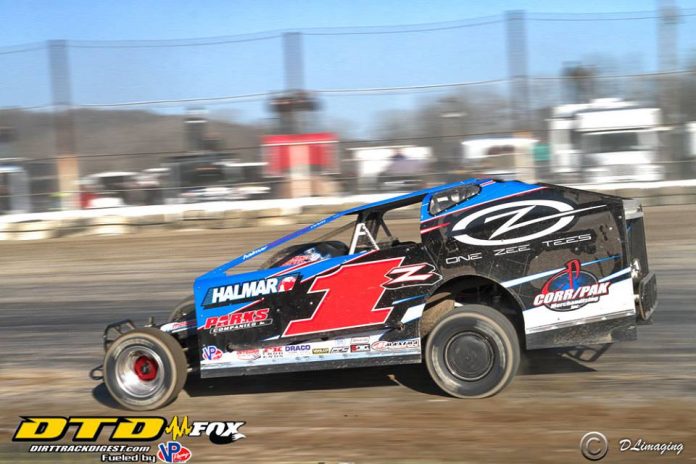 By now, most of you have heard about Stewart Friesen’s latest win, but the big difference at Fonda Speedway was the fact that his wife Jessica was racing her Modified alongside him, a first for the Friesen family.

With three wins in his pocket in a matter of days, Stewart Friesen is on somewhat of a roll. After coming off a difficult season last year with the transition into the NASCAR Truck series along with his regular DIRTcar racing schedule, it’s good to see this young Canadian back on his game this year, picking up his latest win at Fonda Speedway’s “Ice Jam,” making him now a three-time winner of this event. Friesen dominated the race from the showing of the green flag. There were a few cautions through the race but, each time the green was given to go back racing, the number 44 Halmar car made no hesitation to charging back in the lead. The main battle on the track was for second place, with Danny Varin making some incredible outside passes to secure a second place finish over Bobby Varin.

Friesen was ecstatic about his latest victory, saying, “It’s great to be racing back home locally, with family and friends and to get the victory tonight was a great way to cap off the last week.” But the other presence on the track that night was his best friend and wife, Jessica Friesen, who for the first time in many years was out racing in her own Modified, finishing 16th out of the 26 car field.

Once both Jessica and Stewart were back in the pits, Stewart reached out directly to wife Jessica asking her how the car was and about her race. The two were like kids, so excited about the nights racing and recapping their race. As a couple, you could clearly see how happy they were racing together at their local track.

I asked Jessica how she felt racing in the Modified class once again.

“It was really good, had a lot of fun. Its been over 10 years since I raced in the Modified class and this will just be for fun this year as I am very busy with my shirt business One Zee Tee’s. The nice part about it is the fact that I can race locally here at Fonda or Malta, depending on the help I can get over the summer and I don’t have to travel far. I am definitely a bit rusty but I am really looking forward to having some fun this summer, racing the Modified when time permits. But I would have to thank my dad and Jimmy Johnson and the rest of the team along with my sponsors Corr/Pak and Halmar, for without them, I wouldn’t be here tonight.”

It was a great night of racing for the Friesen family and I can bet this will not be the last time these two race it out on their local track this summer. You never know, Jessica may even battle for the win one night against her other half. That is a race I wouldn’t want to miss!

You can learn more about Jessica’s t-shirt business by visiting at https://www.onezeetees.com
Jessica Friesen
518-673-2405
One_ZeeT@yahoo.com