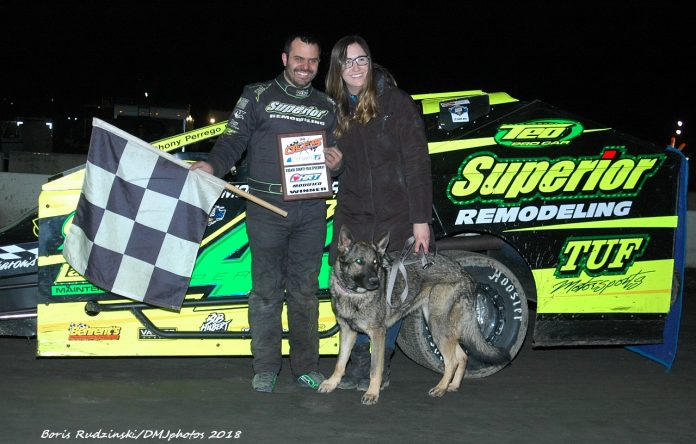 MIDDLETOWN, NY – The 69th consecutive season of racing at Orange County Fair Speedway was very kind to Anthony Perrego. The weary road warrior who has been on the road aboard his Tuf Motorsports, Cavallaro Produce, Superior Remodeling Teo Pro car since Thursday, started on the outside pole for the feature and when it was all over, Perrego decimated the field with ease and picked up the huge $5,000 payday.

The 30-lap feature event featured Mat Williamson and Anthony Perrego leading the field down to the green. Williamson was able to quickly take advantage of the front row starting spot and set the early pace for the feature. The top two drivers were the class of the field early on as they quickly separated themselves from most of the field. With just three laps into the 30-lap affair, the first yellow of the night would fly which tightened the field back up. On the ensuing restart, Perrego blasted right by Williamson and into the lead and would never be challenged the rest of the night.

Just seven laps into the feature the field was strung out single file. Four laps later, Perrego would catch the tail end of the field and started to put the back markers down a lap. As the feature wore on, Perrego was flawless. Hitting his marks, and opening up a nearly full straightaway lead over second place runner Mike Kolka.

As the lap counter hit half way, there was no question that Perrego was in control of the feature. However in positions three, four and five it was a different story. Williamson had his hands full with the ever fast closing Tommy Meier and right behind Meier sporting a new car for 2018 and a new sponsor was “Hollywood” Craig Mitchell in fifth.  Behind the top five runners as the race hit the late stages of the 30-lap affair, Jimmy Horton, the defending track champion, was applying as much pressure as possible for sixth on the 220 of John Ferrier, but couldn’t close the deal and ended up seventh on the night.


“When the first few laps were run, the right rear tire didn’t have any heat in it. When the caution came out and then we went green, the car finally was ready to go. The tires had heat in them and I kind of towed Mat down the stretch there. I’ve been on the road since Thursday and the crew and I are exhausted and we got one more race to go this weekend. This is a good way to start the season,” said Perrego.

Williamson was making a very rare appearance at the “House of Power” on Saturday. Williamson, the son of Bicknell Racing Products’ Randy Williamson, wanted to go racing. With Merritville and other tracks out further to the west not open, Williamson decided to come to Orange County and do some r&d for the upcoming Short Track Super Series event on May 8th. In that event he will pilot a car owned by Jeff Behrent. Williamson won his heat race but had significant ignition or fuel related issues throughout the night. The team changed the MSD box, coil, ignition switch, and coil wire, and carb and still ended up using nearly twice the amount of fuel that one would use for a 30-lap affair at Orange County.

“We used up seven and a half inches of fuel. I don’t think there was enough fuel in the tank to go another 10-laps,” said Williamson. “It sucks to have trouble on your first night out and your so far from home.”

Williamson will call Freedom Motorsports Park and Merritville home tracks in 2018 along with the STSS events with Behrent.

“Lernerville is a four plus hour ride each way. I’m looking to cut down on the travel and be closer to home,” said Williamson.

Helping Williamson out with his repairs before the feature, was Behrent, Pat and Doug Reiser and Jerry Kurz.

Mitchell was aboard his new Bicknell car for opening night. It’s a car that features coil springs versus torsion bars.

“Everyone seems to be going to coils so I thought why not give it a try,” said Mitchell.

Mitchell also was sporting a new sponsor on his big-block for this season. Cousins Ale Works of Wappingers Falls, N.Y. Also, Mitchell was wearing a new firesuit for the new season.

Also sporting a new car and a new sponsor was the ageless veteran Richie Eurich. Eurich is sponsored by Van Groll Heating & Air Conditioning of Pine Island, N.Y. Eurich was aboard a new car for this year. While he wasn’t happy with the cars performance he was confident that he would figure it out and get it back to victory lane again in 18.

Pat Reiser, the second year small-block driver will debut a new sponsor for 2018 next week for his racing efforts. Reiser is excited to announce that Hudson Valley Diesel will be on the side of his Bicknell entry for the 2018 season. Hudson Valley Diesel also sponsors the J73 sportsman entry of Joe Conklin. Conklin will also be doing double duty this year as he has purchased a 358 for competition at Orange County.

Even grizzled veteran Modified drivers have some inner emotions about starting a new season.

Jerry Higbie said, “I still get butterflies in my stomach about opening night.”

Higbie is also the owner of HigFab Chassis based out of nearby Goshen, N.Y. This past off-season they built about 40 cars. An increase of seven from the previous year.

“I don’t want to be the next Troyer, Teo or Bicknell. I only have a few employees and we serve a niche market. I’m happy with the amount we have produced this past off-season. We don’t want to stamp out car after car. We want to focus on each car for quality and service”.

Tim Hindley had a falling out with track management at about the midway point of last season, but he was back for Eastern States weekend to conclude the season. The long-time Modified pilot and a fixture at OCFS, “The Monticello Mad Man,” was nowhere to be found. His brother Tom Hindley said he “didn’t know” what his brothers plans where for this year.

Track announcer Tim Pitts will be bringing you the call of all the action on the track again in 2018. Pitts will mark his 32nd year on the mic at Orange County this year. Over the off-season Pitts suffered a fire at his shop. He said that within the next two weeks he will start reconstruction efforts. If your in your car on the track grounds and want to hear the live race call, tune into 107.7 FM.

Racing was delayed twice on the night. Once because the track put entirely too much water down on the surface causing a nearly hour delay in the racing. The number 18 Sportsman car put 44-laps in to help run the surface in and for their efforts, the team was awarded a new right rear tire from the track management team.

The second delay was because at the end of the sportsman feature, a car melted down a motor in a spectacular way flooding the entire speedway with heavy white smoke which reduced visibility down to nearly nothing.

There is signs of significant capital projects well underway everywhere on the fairgrounds. A new water truck and a quarry truck were on hand to help run the track in. Both of those were emblazoned with the Halmar logo on them. A spot has been cleared for a new section of steel bleachers in turn 4 with the steel nearby ready for installation. All employees were clad in blue shirts that were provided by Blue Diamond Disposal of Sparta, N.J. In addition, Blue Diamond is the official sponsor of the big-block Modified division for 2018.