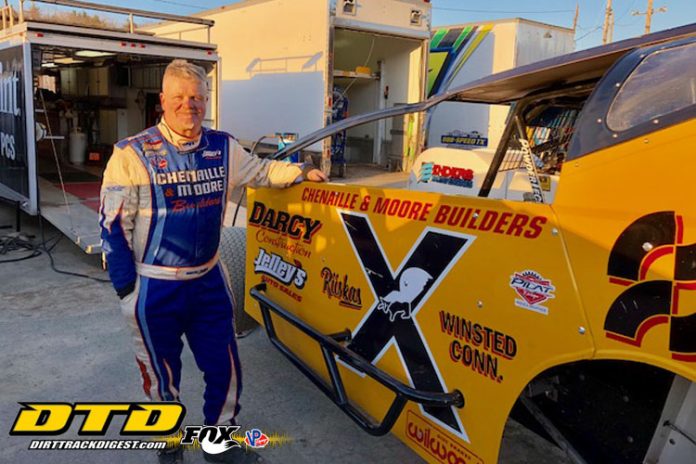 Our official start to the 2018 racing season on the local scene started Saturday at the high banks of Lebanon Valley; Howie Commander’s house of speed. The first person we came across was Bobby Waters at the pit sign in booth. Bobby has been, and still is battling, some tough medical issues and needs your prayers. It was great to see him in his normal spot at The Valley, a familiar face that always has a smile. We’ve noticed over the years that faces do not change at the Valley which says a lot about the dedication of the people week in and week out and a great bunch of people they all are. We checked the line up board and found that nearly 100 racers had gathered to participate in the 65th season opener at the Columbia County oval. Also the 358 Mods were on hand for warm-ups, that also raised the car count. At the drivers meeting we snapped a photo of the driver of the No. 2RJ, Ronnie Johnson, who has moved his Saturday night racing program to the high banks, coming home in sixth position his first night back. Not too shabby for his first start in many years. We also looked over at the grandstands at the work that was continuing on the new aluminum seating which is a welcomed improvement to the historic race facility. We stopped to talk with Keith Flach about two things in his life, the first being the birth of his daughter during the off season and his race schedule for this year. Keith said he is amazed at being a parent and watching his daughter change in so many ways in such a short period of time. Keith said his local racing will remain the same as last year and for the Super DIRTcar Series it will be part of his race schedule as long as he doesn’t have to be home for his daughter. Not surprising that Keith and his wife Chelsea are great parents, they both have great parents. We hope they take the time to enjoy their daughter. winners. Since 1997 there have been eight drivers that recorded wins on opening night and to no surprise, Brett Hearn and Kenny Tremont both have six wins each. Andy Bachetti, Donnie Corellis and Matt Quinn have two and Steve Hough, Chris Moore and John Alberti have one win each. We were able to talk with Steve Hough about his win on opening night in 2006, it was also his first ever Modified win. He said he remembers going lap after lap with Kenny Tremont and the thrill of going to victory lane. Here is Ed’s brother, Rich with Steve. Rich is starting his 61st season at the high banks. Steve also remembered that at the end of the night after his opening night win he walked out with Ed as they re-played the feature and the thrill of a first time win.


One car that stood out on pit road was the Wayne Jelley Modified sporting a special paint scheme and bringing up memories for all who saw it. In was painted like the Ruskas yellow X as a tribute to Butch Jelley who drove it for many years. Wayne said that Butch is not doing well and he wanted to have the car done as one of Butch’s former racers. It turned out beautiful and brought back many memories of Butch and the car racing the high banks. As the Pro Stock feature started to line up we watched the crew of Rob Yetman set up for a pit stop in case Rob had an issue during the feature, setting out tires, carrying jack, etc and then waiting for the outcome of the feature. We spoke with Jennifer Burega Holt who told us that if Rob won on Saturday it would be his 100th Dirt Pro Stock career win. He did win and joining him in victory lane was Jake Ashby candidate for the Assembly seat in the 107th district, with him also was Rensselaer County Executive, Steve McLaughlin. Jake was at Lebanon Valley because it was part of his campaigning efforts, however, he is familiar with a couple of dirt tracks in Central New York, Fulton and Oswego having attended races there.

The Ridge had their opening day on Sunday, with an early start in the case of cool temperatures later in the day. It turned out to be a beautiful sunny afternoon, something we have not seen for some time now. With a new surface, and no sun most of the week, the surface had no time to get settled. The track crew did all they could to give the racers a surface to race on and it improved as the day went on. During the running of the Mini Stock feature we saw what looked to be fireworks in the infield coming from one of the power poles. It turned out to be an electrical short and then when the lights were needed there was no power. Management decided that with darkness setting in, the Crate Modified feature would be run at a later date; in two weeks because next week, Sunday, April 29th the track has a special King of Dirt Sportsman Series event. This means they will run double Crate Mod features on May 6th. Andy Graves won the Mini Stock feature besting the 14 car field. Graves said the new surface was to his liking, starting sixth and making his way to the front in short order and never looking back to take the checker in the opening night event. Luke Horning won the Pro Stock feature, driving the No. 2H. The Senior Slingshot race was won by Brett Putnam and the Junior Slingshot event was won by Darryn Fallis. Bill August won the Limited Sportsman event.