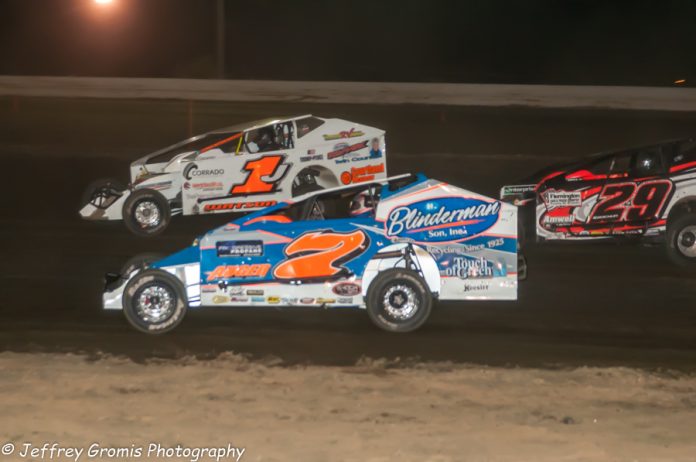 BRIDGEPORT, NJ – If the fan reaction was any indication, the debut race on the new Design for Vision / Sunglass Central three-eights mile oval at Bridgeport Speedway would be deemed a smashing success. The fans were on the edge of their seats for much of the race cheering on the terrific action as the leaders raced under a blanket. All of them looking to be the first ever driver to have his name carved on the trophy and to be the answer of a trivia question through the years ahead.

Don’t get me wrong, there were some issues with the new track. The lighting needs to be improved and some drivers that I talked to said they were having some issues exiting turn four and entering turn one due to the narrowness of the track. The track also seemed to get very dusty during the heats but some of that was due to the bright sunshine that beat down on the track all day. The dust didn’t seem as bad during the feature event. But these are issues that can be looked at and improved upon and I am positive that track owner Brian Ramey and his staff will do what they can to work on the drivers concerns and make the necessary changes that need to be made.

When a fan goes to a race the ultimate goal is to see a highly competitive race with action all over the track and a fight for the lead. The race tonight definitely provided all of the above. Throw in some drivers not too happy with one another afterwards and you had yourself a good night.

During the day when I had some free time I was able to peruse some of the social media sights to get a read on where people stood after yesterday’s race on the new track and for the most part the comments were very positive. Yes, there are always those on social media that will find any little thing they can to be negative and there was some of that going on. Some of the negative comments had validity to them but most of them were just people trying to stir up trouble as usual. The good thing is that Bridgeport’s track management was out and about on social media as well today surveying what was being said and also jumping in and addressing some of the concerns. Something more tracks should do.


But what it all comes down to is the racing and when it was all said and done it was the “Bechtelsville Bullet” Jeff Strunk claiming the win aboard the Glen Hyneman owned All-Fab/Weaknecht Archery #126 Teo car. Strunk was strong all night long coming from the back of the pack to claim a redraw spot in his heat. In the feature Strunk started in the eighth spot and steadily climbed his way towards the front.

Strunk moved into the second spot by lap 10 and started to chase down the leader Danny Bouc. Strunk moved in on the leader but Bouc was able to maintain a small advantage. Disaster then struck for Bouc on lap 15 as the leader spun entering turn two bringing out the caution and handing the lead over to the Boyertown, Pa., driver.

Strunk was able to get out to a safe lead over strong running Modified rookie Matt Stangle. A late race yellow pulled the filed back together and, on the restart, the young Stangle was able to motor by Strunk on the outside to grab the lead. The veteran Strunk never panicked and started to work on the rookie wanting to grab the lead back. While this battle was going on a strong running Ryan Godown threw his hat into the mix looking to get by both and steal the win. All three cars ran nose to tail and side-by-side for the final five laps as the crowd was on their feet.

It looked like Stangle was going to be able to hang on and take the upset win as the leaders received the white flag but the wiley veteran Strunk had other ideas. Strunk was able to get a great launch coming out of turn two to get alongside Stangle and slipped by the youngster going into turn three to grab the lead. Strunk sped under starter Ken Golden’s checkered flag to take the popular win.

Strunk talked about how he lost the lead and how he was able to get it back.

“I spun the tires and didn’t get the left side tires down in the brown like I was able to on the other restarts and just missed it by about six inches and spun the tires and that was all to took for him to get even with me. He had a good line going and was able to take some of my line away to get in front. I was able to get under him, but it took a great run off of (turn) two to get him. That was probably the best run off of two I had the whole race. That kid (Stangle) is a good racer and he drove me clean the whole time.”

Strunk also talked about the track and how exciting it must’ve been for the fans.

“The track was very good and raceable. The lighting needs to be improved some and I was getting a glare from the big track lights at times. I could tell there was somebody behind me there while I was trying to get by Matt, so I had to worry about that as well. I know it was exciting for me and I’m sure the fans had a great time watching it as well.”

Young Matt Stangle tore it up in the Sportsman ranks last season winning track titles at both Big Diamond Speedway and at the Bridgeport Speedway. After last year’s winning season, the decision was made to advance the driver to rookie status in the Modified ranks.
The season hasn’t started out to well for the New Jersey driver as the team has been plagued by motor problems all season long. Although Stangle was disappointed after coming close to that first win he still managed to keep a smile on his face as he talked about his season and his good run.

“It was a great run for us. We just started the year and we’ve already broke three motors this season. We’re just trying to get some momentum going and tonight was a good start to that. It sucks to lose a race like that but we’re happy with our finish tonight for sure.”

I asked Matt his thoughts on the new track.

“It was a lot of fun. The track got better throughout the night I think the more race we run on it the better it will get.”

A Solid Third for Godown

Ryan Godown, aboard the Searock Fabrications No. 26, ran a strong race all night coming home in the third position. Godown talked about his run and how he thought he might be able to go around both of the top two runners and steal the win.

“My car was really good but for some reason I couldn’t get going on bottom on the restarts. I wanted to roll the top but I couldn’t get there and once I got up there and started to get some momentum going the caution would come out. I though I had a good chance to get around both of them when they were battling down low for the lead. I had a good run on them going through turn two on the top but when we were going down the back Strunk moved up a little and I wheel hopped him.  With only a couple of laps left I wasn’t able to get close enough to them to make another run.”

Godown then went on to talk about the track and how racy it was.

“I liked the short track better than the big track.  I think if you ask the fans after a couple of races on both they’ll tell you what’s better. The track was a lot narrower than the big track and it was really snug getting into (turn) one.  Your car wants to push up the track. It happened to me a couple of times and the one time I got into Howard and he’s mad at me for it and I don’t blame him, but I surely didn’t do it on purpose. All in all, it was a fun track to race on and I’m looking forward to next Sunday to get back on it.”

Howard Not Quite Onboard with the New Track

Although Duane Howard had a solid top five in his initial outing on the new track. The Oley, Pa., driver still is not sold on the new smaller race track. I spoke to Howard on the phone the next night to get his perspective on the new layout.

“I’m not sure about it yet. There’s definitely some things they need to work on to make it better and safer for the drivers. It’s way too narrow in spots and the lighting needs to be improved as well. I prefer the big track, but we’ll see what they do to it to make it better going forward.”

Much Needed Top Five for Laubach

Rick Laubach has not had the start he’s been looking for to 2018 but the driver affectionately know as the “Scooby” has started to turn things around and has had some solid finishes over the past few races. Laubach talked about the new track and voiced his concerns.

“It’s definitely short track racing, it’s good and it’s exciting but it’s dark. It’s a different style of racing for sure, not bad just different. I think if they get better lights we can race better but I understand it’s a work in progress. When racing out their people have to trust each other and show respect or it can be bad and it’s hard to do that because it’s so dark.”

28 Modifieds signed in for the event with 27 taking part in the heats after Richie Pratt Jr loaded up and left after hot lap due to what looked like engine problems. Heat winners were Rick Laubach, Dillon Steurer and Jimmy Horton with Wade Hendrickson taking the consi…

A strong running Billy Pauch Jr., had a solid top ten finish go away when a rocker arm broke in the motor of the Danny’s Pizza Pizzazz #51 with less than ten laps to go…

Billy Pauch Sr., managed to qualify in his heat race after having nowhere to go when Frank Cozze spun causing Pauch to hit Cozze hard. After the heat race Pauch found out the rear had been pushed over and the crew thrashed to get the car ready for the feature. With the car still not being right Pauch just took the green flag in the feature and pulled off immediately…

Jordan Watson was a surprise entrant and came home with a solid sixth place finish on the day. Watson was using this race as a test for next week’s STSS race which will also be run on the new track…

Hats off to track owner Brian Ramey who addressed the crowd before the days races started, asking the crowd to be patient as this is a work in progress and asking them to contact the track with any suggestions and also their criticisms as how to the day went…