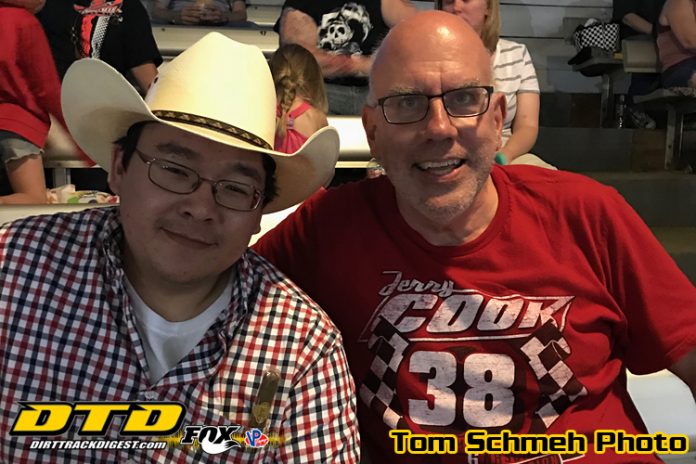 Two weeks have passed since my college hockey season ended in Saint Paul, Minnesota, with the annual Frozen Four and they have been magical weekends at that.

On April 13-14, I ventured down to the Bedford (Penna.) Fairgrounds Speedway and the Greater Cumberland (Md.) Raceway for some dirt Late Model racing. Bedford, which I last visited in 2004, had a good field of 23 Super Late Models, including winner Dave Troutman, runner-up Jeff Rine, Dan Angellichio, D.J. Troutman, and Chuck Clise. Having lived in the Midwest for the last thirty-plus years, the only other names I recognized in the field were Dylan Yoder, Andy Haus, Dan Stone and Mike Pegher. In fact, the announcer said that the “Everett Express” Gerald Chamberlain and sprint-car-racer-turned-National-Dirt-Late-Model-Hall-of-Famer Lynn Geisler were both ‘in the house’ but I never did get a chance to see or meet them. Rounding out Friday night’s Bedford card were the Limited Late Models, Economy Modifieds, Semi-Lates, and Four-Cylinders.

**Did you know that the fabulous Bedford speedway is planning its own Museum of Speed (at the Bedford Fairgrounds)? 814-623-2194 is their phone number, and museumofspeedatbedford.com is their web site. Historian Allan Brown, in his book “History of America’s Speedways, Past & Present,” lists October 15, 1909, as the date of the dirt track’s first auto race.**

On Saturday, I enjoyed a day of learning the histories of the Baltimore & Ohio (B&O) Railway and the Chesapeake & Ohio (C&O) Canal, followed by a night of racing with friend and former Eastern Museum of Motor Racing (EMMR) librarian Ben Turner. The Super Late Models were again the premier class, but only 11 were on-hand at the majestic track just thirty miles south of Bedford. The ‘top five’ at Cumberland were winner Andy Fries, runner-up D.J. Troutman, Matt Sponaugle, Travis Cottle and Cody Hardesty. Supporting classes included the ‘A’ Modifieds, the 602 ‘B’ Modifieds, Pure Stocks and Four-Cylinders. What makes the Allegany County Fairgrounds track ‘must see’ (and it was track #381 for me) is the fact that the old covered grandstands face the north branch of the Potomac River and the towering cliffs of Knobley Mountain. Ben calls Cumberland the ‘Calistoga of the East,’ while I call it the ‘Alcatraz of the East.’ Either way, ‘the Rock’ must be seen for its beauty and its racing.

**Did you know that, according to All Star Circuit of Champions (ASCoC) founder C.H. “Bud” Miller, roll-cages first appeared on United States Auto Club (USAC) sprint cars on Sunday, July 31, 1966, at the Greater Cumberland Raceway? Larry Dickson’s Ken Brenn Offy and Gus Linder’s Mickey Banas Ford both sported them in the feature won by Mario Andretti (with the traditional roll-bar).**

This past Friday, April 20, I traveled through the Catskill Mountains to the Accord (N.Y.) Speedway, which I hadn’t seen since Jackie Brown was dominating the Late Model division in 1980. While in the parking lot before the races, I met Ron Sweeney, who was also friends with my early 1980’s Fonda (N.Y.) Speedway buddies Charles “Charlie Tuna” Thiese and Harold Brossman. Ron directed me to the location of the defunct Onteora Speedway in Olive Bridge, N.Y., Although I was unable to ‘walk the track,’ I did take some photos of the now-overgrown site. **Did you know that, according to its web site, the United Racing Club (URC) has visited the Onteora Speedway on two separate occasions? The first sprint car event was on Tuesday, July 4, 1961, and it was won by Dave Humphrey of Seekonk, Mass. The second and final URC race was held on Sunday, May 29, 1966, and was taken out by Lou “Peach Picker” Johnson of Wilmington, Del. Indianapolis 500 winners Bill Holland (1949) and Mario Andretti (1969), and veterans Jerry Karl and Al Loquasto, all competed with URC at Onteora during their storied careers.**

On Saturday afternoon, I opted to head for the Outlaw Speedway in Dundee, New York, for their Spring Nationals special event, featuring $3,000-to-win Empire Super Sprints (ESS), $3,000-to-win Modifieds, $1,500-to-win Crate Sportsmen, Street Stocks, International Motor Contest Association (IMCA) Modifieds, and Four-Cylinders. In all, over 170 race cars were on hand for the sunny-slick-n-dusty daytime show at the Yates County oval in the Finger Lakes region, which even featured Amish passers-by in their buggies and on their bicycles. Jason Barney, the defending ESS champion and a 2016-17 competitor with the American Sprint Car Series (ASCS) national tour on their Summer Speedweek, the Constantia, N.Y., native won the non-stop 25-lapper. Originally booked as a Friday night joint show with the Patriot Sprint Tour (PST), the postponement forced it to be a standalone ESS event (with PST bonus money, collected by the top three). Rounding out the ‘top five’ were runner-up Matt Turner, Canadian Dylan Westbrook, Jonathan Preston and Billy VanInwegan. I believe Matt Billings was the only other Canadian in the 21-car field, which surprisingly lacked any drivers from Quebec (although Alex Vigneaux did run fourteenth with URC at Port Royal, Penna., on Saturday night).

Rochester Institute of Technology (RIT) graduate Matt Sheppard won the Modified main, followed by runner-up Nick Nye, veteran Alan Johnson, Cory Costa, and Derrick Podsaidlo. For me, it was fun to spend the afternoon meeting former Flemington (N.J.) Speedway program-seller Neal Wilt, who annually attends the Knoxville (Iowa) Sprint Car Nationals (and stays with KnoxVegas friends Dennis & Janis Johnson), and Roger Jordan of Speedsville, N.Y., I believe Roger is the father of Kevin and Pat Jordan, and grandfather of Dustin, all of whom raced at Dundee on Saturday. I also expect to see Ryan and Chris Jordan race later this summer.

**Did you know that 2002 Knoxville ‘360’ Tournament of Champions winner Josh Higday of Des Moines, Iowa, competed in the two-day 2004 Bully Hill Vineyards Fall Sprint Nationals at the then-known-as Black Rock Speedway in Dundee, New York? Although he did not have a great weekend in general, he did finish fifth in the Friday night All-Star Dash behind winner Blake Breen, future National Sprint Car Hall of Famer Kramer Williamson, Jeff Van Dusen, and Rich Swarthout, and ahead of George Suprick, Chuck Hebing, Chris Shuttleworth, Rick Wilson and Tim Hogue, respectively.**

Thanks to long-time friend Jeff Gromis and Dirt Track Digest’s Mike Mallett for the opportunity to pen a weekly column in DTD. Again, after leaving the upstate New York racing scene in the fall of 1985 and just returning last summer, I have a lot to learn (and re-learn). Any (and all) criticisms and notes are welcome at iowabasedtraveler@yahoo.com. Thanks!