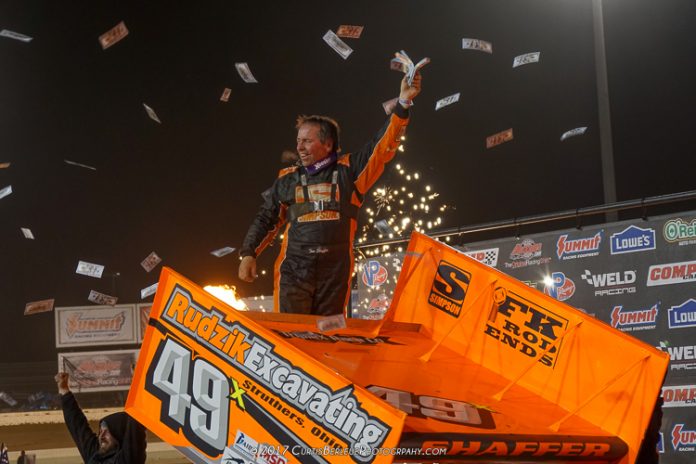 He won $150,000 in the 50th running of the Knoxville Nationals back in 2010.  On Saturday night Tim Shaffer claimed another six-figure paycheck in the inaugural Sprint Car World Championship at the Mansfield Motorsports Park.  The driver of the Demyan-Rudzik Racing No. 49x ride led every lap before collecting the $100,000 payday.

“This is awesome,” stated Shaffer afterwards.  “We put ourselves in position and made it happen.  This hasn’t hit yet.  Even when I won the Knoxville Nationals it took until the next day when we were driving home.  What an event Cody (Sommers) is doing here!  This place has so much potential.  I would love to see this keep going.”

Although he led all 50-laps of the A-Main, that doesn’t tell the whole story of Shaffer’s win on Saturday.  He nearly saw his paycheck lightened significantly on the final lap as Aaron Reutzel took a shot on the final lap as they raced into turns three and four.

Reutzel got a strong run off of the second corner before diving below Shaffer at the entrance of turn three.  Reutzel slid up in front of Shaffer, but Shaffer drove back underneath as Reutzel’s right rear Hoosier bounced off the wall to barely beat him to the checkered flag.


“I knew Aaron was being careful back there, saving his tires,” said Shaffer.  “I knew I had to bend the car.  He was coming through so hard that he was going up the track.  I knew if I could get bent and turned down before he could it was going to be a drag race.  I don’t know how close it was, but it had to be pretty close.”

The sequence of events that allowed Reutzel back into the mix began on lap 45.  Carson Macedo slowed with a flat tire setting up a dash to the finish.  Shaffer made a major mistake on the next restart not realizing that the race was coming back to green.  He wasn’t in the position he wanted to be when the green flag was displayed.

“That last start caught me off guard,” cited Shaffer.  “They said we are going green and I was on the bottom of the track.  I didn’t want to start there.  I had been starting up and running down the hill.  I knew he had a run on me and I thought I was going to lose it over that.”

After the poor restart, Reutzel was glued to the rear bumper of Shaffer’s car biding his time.  He looked to make a similar move to the one he pulled on the final lap on lap 49.  Shaffer tucked down low entering turns three and four blocking Reutzel’s initial run.  Reutzel had to regroup.

“You know what the other guys is going to kind of do because you would do the same thing,” mentioned Shaffer.  “You got to set yourself and get the run down the hill and cross over so you can give the slider.  I was hoping that’s what was going on.”

Reutzel tried but it was Shaffer coming out on top.

Cap Henry wasn’t even scheduled to compete at the Sprint Car World Championships until a late week call put him back in familiar territory.  Henry was called to fill the seat in the No. 21 ride after Dale Blaney was injured.  He did an admirable job in picking off a fifth place finish.

“We got pretty lucky that Daniel (Smith) got this thing rolling around the bottom,” commented Henry.  “A lot of them guys were struggling down there.  It was tough to pass so you had to take them when you could and sometimes you had to make it happen.  It’s an interesting race track, but it’s fun.”

Henry’s A-Main got off the worst possible way.  Henry went into the first corner and spun collecting Kerry Madsen.  The contact put a hole in their new tire forcing them to change that.  As a result, Henry ran all 50-lap on a used tire.  He was still able to regroup and race his way back up through.

“I just lost it,” he said about the spin.  “I got stuck behind some guys doing some goofy stuff.  Unfortunately we took Kerry out.  Other than that I’m really happy.  We kind of struggled on practice day.  We found some speed yesterday, kept plugging away.  My first night in the car was on Thursday.  I can’t say enough about Daniel Smith and Adam Brough for giving me the opportunity.”

Madsen’s A-Main was over before it started.  The Australian driver was collected in Henry’s spin sending him flipping.  He walked away but his day was over.

Hunter Schuerenberg’s top ten finish went by the way-side as he got into the wall hard late in the feature bringing out the red flag with only a handful of laps to go.

Troy Kingan also flipped during heat racing action.  His day was over but like others he wasn’t injured.

The flat tire bug hit hard on Saturday.  Danny Holtgraver was in a transfer position when got a flat tire knocking him out of feature event.

Joey Saldana rallied from a flat in the dash to earn a top five finish.

In the feature Macedo’s tire went down while was in a podium finishing position.

Brian Brown watched his chances of a top five deflate when he got a flat tire on lap 27.  He returned but was a lap down.

James McFadden drove the Highland’s Racing entry.  He was in the top 10 when he planted himself hard into the turn two wall.  That was the end of his night.

Lance Dewease earned a $2,000 win in the non-qualifiers feature event.  Dewease made a mid-race pass of Cale Conley for the win.

Brock Zearfoss had a chance to set himself up with a strong heat finish.  Unfortunately he  hopped the cushion and bounced off the wall.  That put him behind where he found himself in the non-qualifiers feature.  He finished fourth while the Washington to Pennsylvania transplant Trey Starks finished in fifth.

The weather for Saturday’s event was less than idea.  The show was run with temperatures in the mid-30’s.  At one point in the afternoon light snow was falling.  Kudos to the management team for keeping things moving along.  There was very little downtime in the program with the only real break taken prior to the A-Main for driver introductions.