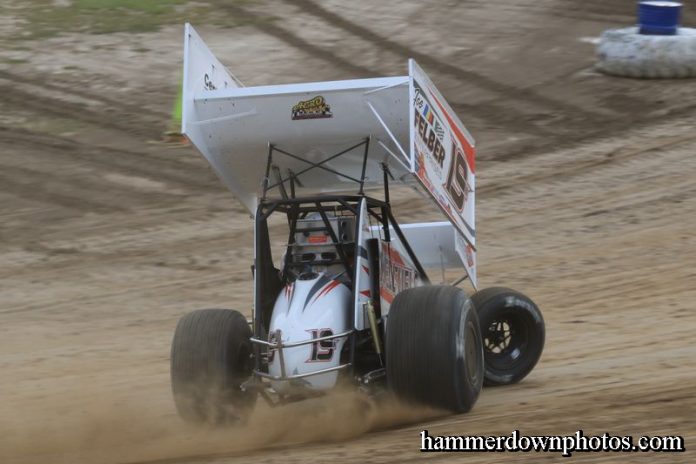 The first heat win of the year on the high banks of Fulton went to Dalton Herrick in the Kiser Sand and Gravel 29. Paul Kinney started on the outside pole and held on for second.

Danny Varin won the second eventful heat. Parker Evans flipped in turn one while racing for the lead. On the second lap four restart Larry White spun in turn three. The last six laps allowed Varin to open up his lead over Coleman Gulick.

Shawn Donath and Steve Poirier set the pace for the third ESS heat. They finished in that order, but Dylan Westbrook made a bonzai slide job to pass two cars in turn one on the last lap to capture the final transfer spot.


Sam Reakes IV pulled the trigger and leaped out to a wide lead in the fourth heat. On the last lap he held a straightaway lead over second place, and defending ESS champion, Jason Barney.

Jessica Power led the first DIRTcar Sportsman heat to the green flag for the 2018 season. Brad Shilling was able to grab the lead from her and held on for the win with Powers finishing second.

Heat two was led to the line by “Woosh” Alan Fink with Jimmy Moyer outside. The 99 car of Phelps got by Moyer on lap five, only to chase Fink for the remaining laps.

Heat three for the DIRTcar Sportsman was led to the green by the 20k of Keith Inman but Kevin Root took over with Tony Finch III in tow. Inman raced back but Finch held him off for second place with Root grabbing the win.

Heat race four had young Charlie Tibbitts outside of Shane Pecore who sat on the pole. Both driver’s held a wide enough margin to finish where they started.

Heat five was led to the green by Brad Rouse with Eric Giguere outside. I noticed the dropping temperature and the darkening sky were creating a very racy track as the moisture was creating a lot of bite. Rouse went on to win with Matt Janzuk taking second place.

After a few modified hot lap sessions and a session for Late Models the ESS dash was pushed off. Larry Wight won from outside the front row.

The Lucas Oil Empire Super Sprints B-Main was led to the green by two women. Emily VanInwegen and Kelly Hebing led the field into the first turn. Hebing took the lead with Mike Mahaney jumping to second. He continued to pressure Hebing until he was able to slip by on the bottom of the back stretch on lap six. Mahaney was able to open a wide lead for the win with Hebing second. Peebles and Wickham battled for third and fourth respectively.

The Lucas Oil Empire Super Sprints followed three very racy DIRTcar Sportsman consolations. Shawn Donath led from the pole with Billy Van Inwegan chasing hard while Paul Kinney pursued from third. Billy V. grabbed the lead from Donath, then Kinney raced the top spot away from him. As Kinney pulled away the slowing car of Pete Richardson flipped hard in turn three bringing out the red flag on lap 15. Paul Kinney drove his 19k Gambler Chassis to his first USA win while holding off the agressive challenges of defending champion Jason Barney. The interesting history of these two drivers began at the quarter midget ranks, then Open Sportsman, followed by Modifieds before both drivers settled on Sprint Car racing. They’ve literally raced together since they were around five years old.

The 50 lap DIRTcar Sportsman Series feature event was an event. These men and women put on a show all night, and the feature was no different. Shane Pecore came home with the win, and it was refreshing to see every pass tech considering some last minute rules changes released this year.

Unfortunately, Saturday’s scheduled Super DIRTcar Modified event was rained out. Hat’s off to the track for calling the show early. The rains came in buckets at the scheduled race time of 5 PM where I was, only roughly 30 miles from the track.

I’ll be missing everyone, and every event next weekend. I’ll be in Tulsa with my wife moving Jon out of his dorm and hauling some of his stuff home for the summer. It will be great to finally see him in real life, as opposed to real time via Duo or Skype. I haven’t laid eyes on him since January 8th. Our visit will be short because on the 6th he begins a week of intense training before flying to Uganda May 13th for a month of missions and evangelism work with ORU. You’ll all get to see him after he gets home June 14th.

The unseasonably persistent snow seems to want to linger a little longer. It makes me wonder why we squander the beautiful late October and early November weather which seems to be warmer and dryer than this time of year. I’ve often thought we could race deeper into the year and start a little later to let the spring time wet weather sputter out.
I remember a time when the 200 at Syracuse was rescheduled for the first weekend in November after raining out a month earlier, and it ran off without a hitch. Just my thoughts in the matter.

I’ve been preaching about the fear of the Lord in my church over the last two weeks. The truth behind that term is the fear of the Lord isn’t being afraid if what He could, or should do to us because of how we choose to live. The fear of the Lord is a continuous awe of Him for who He is, how He is, and for doing what He did for us in spite of us. In truth and in context of this terminology, the fear of the Lord is an awestruck wonder of His Person and Presence that leads us to honor Him with the deepest and most sincere respect. We don’t have to be afraid of God because Jesus Christ appeased His wrath. We should honor Him for that alone, because that changed all the rules of the race we call life.

“But now God has shown us a way to be made right with him without keeping the requirements of the law, as was promised in the writings of Moses and the prophets long ago. We are made right with God by placing our faith in Jesus Christ. And this is true for everyone who believes, no matter who we are. For everyone has sinned; we all fall short of God’s glorious standard. Yet God, in his grace, freely makes us right in his sight. He did this through Christ Jesus when he freed us from the penalty for our sins.
Romans 3:21‭-‬24 NLT”

Being freed from the penalty of our sins is performed through the performance of Jesus Christ. He lived perfectly before the Father in human form, to carry our sins in His own body to the cross, becoming the curse we all faced, and burying them in His grave only to rise again to new life. We can all enjoy that new life through His personal sacrifice that appeased God’s wrath. Our freedom from that burden makes it easier to circumvent life’s many turns, just like a free race car circumvents the corners of a race track with less resistance.

“In this the love of God was manifested toward us, that God has sent His only begotten Son into the world, that we might live through Him. In this is love, not that we loved God, but that He loved us and sent His Son to be the propitiation for our sins. 1 John 4:9‭-‬10 NKJV”

Propitiation is a fully appeasing sacrifice that turns away deserved wrath. That’s how valuable we all are to God. Jesus saw us from His position of glory in heaven and stepped down to earth to rescue us from ourselves. You could say He looked down at us and decided we were “to die for”.

How awesome is that? Our salvation and permanent place in heaven is secured by His performance, not ours. Our only work in this is to accept Him as our savior, and release our life for His through our verbal acknowldgement if His Lordship over us.

“But faith’s way of getting right with God says, “Don’t say in your heart, ‘Who will go up to heaven?’ (to bring Christ down to earth). And don’t say, ‘Who will go down to the place of the dead?’ (to bring Christ back to life again).” In fact, it says, “The message is very close at hand; it is on your lips and in your heart.” And that message is the very message about faith that we preach: If you openly declare that Jesus is Lord and believe in your heart that God raised him from the dead, you will be saved. For it is by believing in your heart that you are made right with God, and it is by openly declaring your faith that you are saved. As the Scriptures tell us, “Anyone who trusts in him will never be disgraced.” Romans 10:6‭-‬11 NLT

The simplicity of the true message of the Kingdom of God is that Jesus paid it all so we could be set free from the cost of our sins. How awesome is He for doing that? When you consider how much honor we give to our vetrans that fought for our civil liberties, how much more honor and respect does God deserve for dying for our spiritual freedom to dwell in His kingdom for eternity? I’m in awe of what He did for us. I’ll never lose my sense of awe, deeply sincere honor, and reverence for what He alone was able to do to secure my freedom from my sins. That’s what the fear of the Lord is.

Have a great couple of weeks. I’ll be back for the action on May 11th at Breweton Speedway, and sweep the weekend by covering Fulton and Utica Rome Speedway. I pray you have great weather, great racing, and God’s protection as your season gets rolling. If anyone needs to reach me while I’m gone message me at Finish Line Chaplain, or Kevin Westcott Ministries on Facebook. I’ll be checking my messages at every fuel stop along the road, while trusting for His provision of covenant promises to flow into your lives.