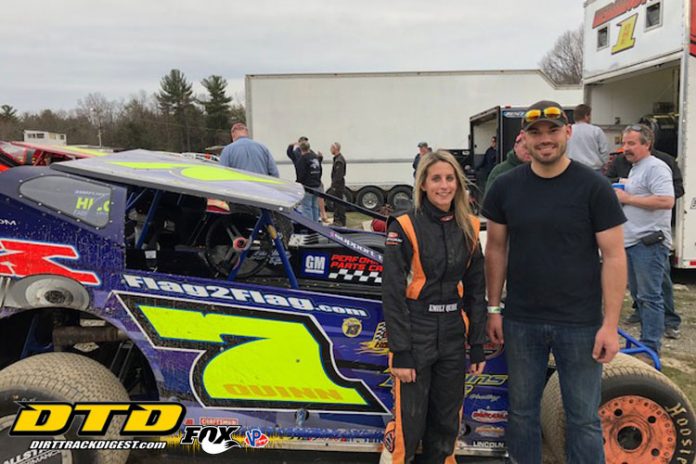 Rain, rain, go away! The only racing seen locally was on Tuesday evening at the Great Race Place. This show came about because of a rain out on the prior Friday, which was scheduled to be the tracks opening night event. The season opener at Albany-Saratoga was a high paying $7500 to win, 44 lap event for Modifieds, the highest ever in the history of the track for an opening show. When we arrived before 5:00 pm the crowds had already started lining up at the ticket windows with the line stretching across the parking lot. What brought the crowd could have been the eagerness of getting in the first show of the season at the Malta oval, the outside drivers that were expected to be on hand for the mid-week show, and the regular admission price of $11 for what was a very special event. On the card for the night were Modifieds, Sportsman, Limited Sportsman, and Pro Stocks with a total of over 130 cars.

Walking down pit road we stopped at the pit of Emily Quinn who was driving a Limited Sportsman this season in her return to racing. Emily started her racing career on the pavement at Devil’s Bowl Speedway in Vermont where she raced against the likes of Kenny Tremont and Vince Quenneville, Jr. Emily said it was great to be on the track with these talented drivers.

“I took time off to finish college but now will be at Albany-Saratoga on a weekly basis.” She says she loves and prefers to race on the dirt. We snapped a photo of Emily with fellow racers Cody Bleau. Cody was in the pits visiting friends while waiting to get back to racing on Saturday at Fonda. For her return to racing Emily came home with a 12th place finish.

The fans were treated to some great racing all evening on a very pleasant night. Over 40 Modifieds were on hand vying for a spot in the feature, with 22 drivers running for the ten spots out of the consolation race. The feature race was one of those that fans will be talking about for many seasons, you know, one of those, you should’ve been there events. And no one left before the checker flew. The battle was between Tim McCreadie, Matt Sheppard and Stewart Friesen in the final laps. McCreadie won the battle with Sheppard taking second and Friesen finishing in third. It was McCreadie second Albany-Saratoga win, he won Brett Hearn’s Big Show 9 last year. The hard charger was Kenny Tremont who came from 17th spot to 4th. McCreadie did a victory spin on the front stretch in front of the capacity crowd, and in his interview thanked two time Super DIRT Week winner, Vic Coffey for preparing the No. 39 that brought him to victory lane. McCreadie has been on a hot streak, he won two of the Modified events at the DIRTcar Nationals in Florida in February and took home the championship gator trophy. Our thoughts are that if Tim goes to Oswego at the end of the season like he plans he has a good chance at the win.

On Saturday before leaving for Lebanon Valley and what ended up to be another rain out, Ed received a call from Mark “Krash Mender” Krosky, saying that he had something he wished to give him. After the rain out he met Krash at the Pilot service station off I-88 and he presented him with the 4×4 foot checkered flag that Pastor Dave Miller carried with him to racing events. As many know Pastor Dave passed away three and one half years ago after a courageous battle with cancer. Many knew him and loved him and Ed got to spend much time with him at various events and even spoke at many events with him. He is surely missed and as a fellow lover of racing Ed will certainly cherish this and we thank Mark for thinking of him. Racing people are the best and Pastor Dave brought out the best in people.