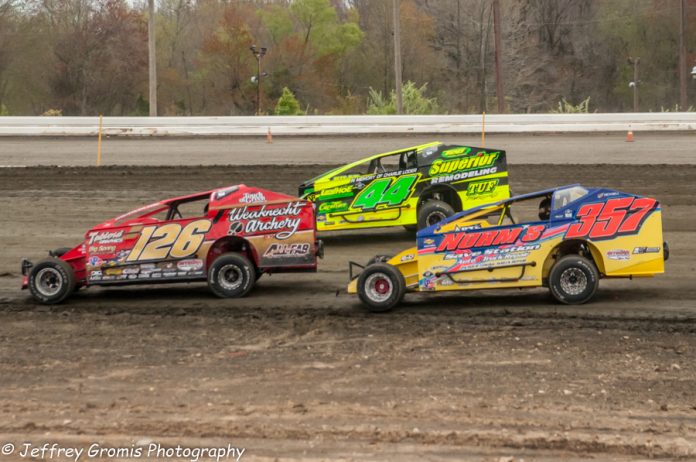 At this point I am pretty positive that if Jeff Strunk had his way every race at Bridgeport Speedway would run on the new “Design for Vision / Sunglass Central 3/8’s mile oval. Strunk dominated Sunday’s 40-lap Short Track Super Series South race at the South Jersey speedway and is now two for two on the new track.

“The main reason we came last week was to get a read on the new track and it worked out just like we hoped it would,” said Strunk.  “We came in with basically the same setup and just tweaked on it a little and here we are.”

Strunk was lucky enough to draw the pole for the race as the cars staged behind the grandstand for the fans to see. The fact that Bridgeport does this is probably one of the coolest things a track can do for its fans. The looks on the kids faces and as well the adults are priceless as they get a chance to hob knob with their favorite drivers. Anyways, back to the race.

It was all Strunk right from the beginning as he jumped out to the lead right from the start and never looked back, leading all 40 laps on his way to the $5,000 victory. Strunk did have his challenges during the race as he had to battle lapped cars in the second half of the race but his biggest challenge came when the caution flag came out with only four laps remaining.


At this point Strunk had over almost a straightaway lead over his nearest challenger Matt Sheppard. Also, looming in third place was Stewart Friesen. Having these two dirt modified superstar drivers on your back bumper would rattle most drivers but not the wily veteran Strunk. When starter Warren Alston displayed the green flag to restart the race Strunk immediately put a safe distance between himself and Sheppard.

It was a quick four lap sprint to the finish for Strunk as he passed under the checkered flag to take the big win. It was the first ever STSS win for the “Bechtelsville Bullet” and it was a win him and his team have been shooting for since their big disappointment two years ago at Georgetown Speedway when the No. 126 broke an axle leading the race.

“It means a lot to me get this win tonight. Not so much for me but for Glenn and Bonita (Hyneman) who give me everything I need to be successful. Georgetown was a hard one to take there a couple of years ago but winning tonight helps make up for it. I’ve been wanting to win one of these STSS for awhile now and it feels really good to finally do it and to beat Matt (Sheppard) and Stew (Friesen) who are the two best in the business really makes it extra special.”

The only issue that Strunk appeared to have all race long was when he came up to lapped cars and Strunk said that even wasn’t too much of a problem.

“With the track being fastest around the bottom that’s where they were running as well and I can’t blame them. The starter was giving them the move over flag and as soon as they knew I was there they moved up and let me go. There was no way I was getting off the bottom to go around them, that’s for sure.”

Sheppard made the long car ride from upstate New York a successful one as he came home with another second-place finish in his quest for the STSS South series title. Sheppard had his shot at the leader with four laps to go but could do nothing but watch as Strunk sped away from him on the restart. With Sheppard’s two second-place finishes so far on the series it makes him the current point leader in the south region.

“We’ll take it,” mentioned Sheppard as he greeted the fans behind grandstand. “We had a good car tonight.  These guys give me a really good car to drive and I can’t thank them enough. It’s a good start for us in the south series and the car is in one piece and we’ll move on to the next race. It sure makes the long ride home a lot better when you can get a good finish.”

This was Sheppard’s first time on the new 3/8’s mile oval and I asked him his thoughts on the newly opened track.

“I don’t know, I don’t think it’s bad. I think the surface still needs a little work and I am sure they’ll keep working on it until they get it decent. It was okay early on but once we all got rolling there it got to be one lane at the bottom. They do a good job here and I am sure they’ll figure it out and get it going good.”

Friesen wasn’t sure what to expect when he pulled into Bridgeport Speedway on Sunday having never raced on the new 3/8’s mile speedway and when it was all said and done the Sprakers, N.Y., driver was happy with the results.

“It was a good run.  The guys worked hard to get this car ready. New tracks are always a guessing game when you come there and tonight we just missed it a little bit. We started tenth so we passed a lot of cars. We had a fast Halmar Modified tonight, Billy the Kid builds us some great motors so I’m happy with what we got tonight. We were really good there at the beginning and through the middle part of the race but it got really tight there at the end.”

After a month off from the Nascar Camping World Truck Series, Friesen is eager to get back in his Halmar International Chevy Silverado and take on the Monster Mile this weekend in Dover.

“I’m really looking forward to getting back into the truck this weekend for sure. Dover didn’t go too well for us last year but I think we’ll be pretty good when we unload at Dover this year.”

A fourth-place finish is not what Anthony Perrego strives for when he and his Smith Remodeling racing team pull into a track, but considering this was Perrego’s first time on the new track he was able to come away at the end of the night with a smile.

“That was a lot of fun tonight. We had a rough couple of laps there at the beginning and dropped back to I think 14th or so but then the outside started working and we were able to get ourselves back up there.  Then it went away and we were all fighting for the same lane. All in all, it was great little track and I can’t wait to come back and race on it again.”

Frank Cozze took a wild ride during the Modified feature as he was attempting to pass Danny Creeden on the outside off of turn two when the two cars made contact sending Cozze over the banking and hitting a light pole for the 5/8’s mile track. Cozze required medical attention following the incident but was deemed okay. I reached out on Monday to find out how Cozze was feeling and was told he felt really good and surprisingly not sore at all. Unfortunately, the same cannot be said for the No. 401 Modified…

After a big win on Saturday night at his home track of Delaware International, Jordan Watson’s day came to end early after the motor blew in his No. 1J while leading his heat race…

Ryan Godown had to go to a backup car when his No. 26 Searock Fabrications outlaw car refused to start while sitting on the quarter-mile track awaiting warmups. The team quickly pulled out their Big Diamond spec 358 motor car to ready for the heat. Godown ended the night with a nice sixth place finish…

Richie Pratt Jr was driving the No. B4 Kyle Borror car after damaging the motor in his No. 28 a few weeks ago. Pratt looked good winning his heat race but was caught up in a tangle after bad restart…

Jimmy Horton was forced to bring his No. 43 Middletown big-block car after not being happy with the engine in the small-block car after competing at New Egypt Speedway on Saturday night. Talking to Horton before the race he said “I brought a knife to a gunfight” knowing that the big-block car was not the way to go on the new 3/8’s mile track…