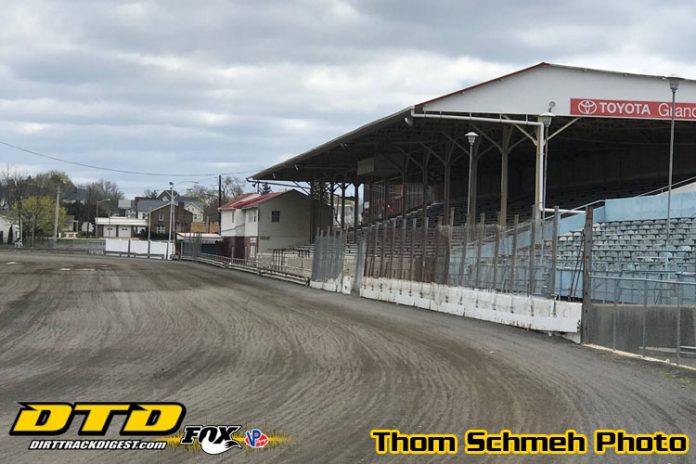 With rain changing my Friday night plans from watching racing to enjoying a fish fry, I hit the highway again on Saturday, April 28. I was originally bound for the Orange County Fair Speedway in Middletown (N.Y.) and then the Bethel (N.Y.) Motor Speedway, both in the Catskill Mountains, but those venues had poor weather forecasts (and eventually rained-out). So, I ultimately headed for the Selinsgrove (Penna.) Speedway for a night of open-competition ‘360’ Sprint Cars, Super Late Models, $1,000-to-win Pro Stocks and Roadrunners.

The top divisions had 18 cars each, while the secondary divisions had just 12 cars each. I expected 24 sprint cars with the United Racing Club (URC) being rained-out at Orange County, but, as far as I could tell, Curt Michael was the only ‘invader.’ Still, it was a fun feature with Jason Shultz winning over a fast-closing Davie Franek, followed by Ryan Kissinger, Curt Michael and Derek Locke. Bryan Bernheisel picked up the Super Late Model main over Gene Knaub, father Jim Bernheisel, Hayes Matten and Brett Schadel.
The highlight of my evening was visiting with promoter Steve Inch and videographer Shawn Wood of The Dirt Track Channel after the races. Steve remembered my last visit to Selinsgrove actually seeing a race, which was the 1989 National Open, sanctioned by the United Sprint Association (USA). Selinsgrove was always a good stop for the USA that season. Shawn remembered some research that I had recently done on his racing family.

**Did you know that, according to Bo Fasold and the track’s web site, National Sprint Car Hall of Fame (NSCHoF) inductee and Thrill Show operator Joie Chitwood designed and laid out the half-mile Selinsgrove Speedway in 1946? Fellow NSCHoF inductee Doug Wolfgang once said that Sharon (Hartford, Ohio), Selinsgrove, and Knoxville (Iowa) all had identical configurations. The Blaney family and their partners have since shortened the Sharon Speedway.** Sunday, April 29, would have been my late mother’s 99th birthday and, as luck would have it, I drove through her birthplace of Nanticoke, Pennsylvania, to get to the Evergreen Raceway in nearby Saint Johns, which was track number 382 for me, in the foothills of the Pocono Mountains. I also drove through such historic (racing, personal) communities as Berwick, Harvey’s Lake, Shickshinny and Lake Silkworth.

For the record, I believe that 14 years old is too young to wheel an asphalt modified in competition. 14-year-old Brayden Spencer, Jimmy Spencer’s grandnephew, made his debut, though it was in the Street Stock class

I was positively impressed with Evergreen’s adult admission price of just eight dollars and the menu in their food concession was very diverse and reasonably priced, although spell-check does need to be run on it (cheasesteak, really?). Speaking of race track positives, I have been very impressed this season with fan-friendly Victory Lanes at the New York ovals of Accord and Dundee. On the negative side of the balance sheet are track announcers that wait to name the drivers until the racers are revving their engines on the front stretch, making it virtually impossible to hear anything on the public-address system. **Did you know Nick Adams, lead actor in the 1968 racing film “Fever Heat,” was also born in the small coal-mining community of Nanticoke, Pennsylvania (on July 10, 1931)? His real first name was Nicholas Aloysius Adamschock and he played opposite Jeannine Riley of TV’s “Petticoat Junction” fame in Russell Doughten’s movie, which was filmed at the dirt tracks in Stuart and Oskaloosa, Iowa. It was based on the novel of the same name by Henry Gregor Felsen.**

Finally, Tuesday night of this week was Five Mile Point Speedway’s make-up date for the $1,000-to-win Crate Sportsman class, along with Factory Stocks, Four-Cylinders and the Xcel-600cc Modifieds. It was a beautiful night and admission was a reasonable 12 dollars, with one Sprint Car and a couple of full-blown Modifieds (including Mike Colsten) using the night for practice. The ‘top five’ in the headline division were Tommy Collins, David Schilling, Tanner Harpell, Kyle Pierce and Alex Yankowski. Other names in the feature that I recognized were Tyler Thompson, Dustin Jordan, Pat Jordan, Dale Welty, A-Jay Potrzebowski and Jimmy Zacharias. I still need someone to explain the entire racing Zacharias family tree to me.