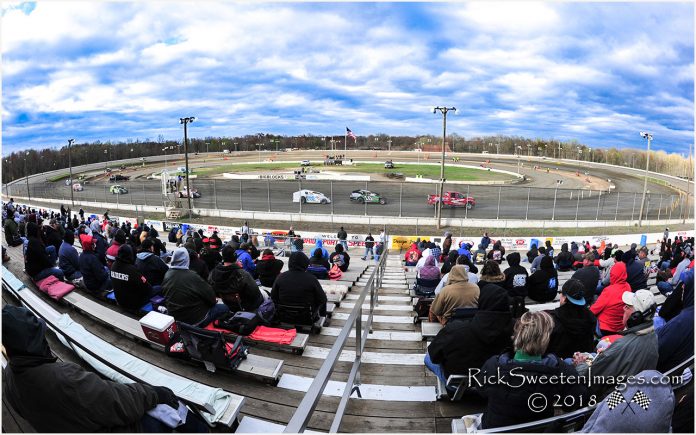 Sunday Delores and I set out for race number two of the Bob Hilbert Sportswear Fueled by Sunoco Veloscita USA South Region Short Track Super Series (STSS) at the Bridgeport Speedway. The raced was known as the ‘South Jersey Shootout’ for the big/small block Modified division. The Crate Sportsman Series and the Bridgeport Speedway Outlaw stocks rounded out the program.

The Track: The race was contested on the newly built 3/8th mile track now known as Designs for Vision/Sunglass Central. The overall facility know has three tracks in one which gives them many options for racing. Just my dumb brain working here and I know it would need a lot of work by the crew of the cars but I would love to see a triple 20 with each 20 on a different track. Bridgeport held a race the week before this one and found a couple areas that needed attention. Series Promoter Brett Deyo spoke of that in the drivers meeting stating that five new portable lights were brought in for a couple of dark spots. It was well lit so that problem seems solved. Other problem was drivers were saying the track was to narrow getting into turn one. The track crew widened that and seemed to take care of it but will be a hassle if they run too many times as you have to take that corner back apart as it sticks out onto their huge 5/8 mile track. It is only going to be used for a few specials this year so the crew will adjust. The shortened track will know allow the World of Outlaw Sprints back as they said the big track was just to fast. I believe the track has much potential but definitely needs more racing on to develop more of an outside track. Some passing was done on the outside but mostly on original and restarts or if you were passing a slower car. One other issue I believed that needs to be addressed is putting up foam blocks or some protection for the light poles on the inside of the big track which is outside of the 3/8 mile. An incident during the Modified feature when Frank Cozze battling with Dan Creeden ran out of real estate and went off the track and hit the light pole hard. That could have serious repercussions in the future in might opinion.

Numbers: Here are some numbers from this race to digest. Modified count was – 46, Crate Sportsman – 37 and Outlaw Stocks -12. There was five Modified heats of 10-laps in distance, four Sportsman heats of eight-laps and one Outlaw Stock heat for six-laps. Total of 88-laps and then then Modified consolation events at 10-laps and two Sportsman consolation races of eight-laps. Add these 46-laps of consi action to the 88 heat laps and you now have 134-laps. Features were 40 for the Modified, 20 for the Sportsman and 15 for the Outlaw Stocks. Total with the 75-laps of feature racing gets you to 209-laps of racing.

The race was the 51st race of the STSS and it was the 2nd on the South Series for both the Modified and Sportsman. Jeff Strunk who picked up the feature go registered his first ever STSS feature event. Taking over the number one spot in points after two races on the series for the Modified cars is Matt Sheppard who has garnered two second place finishes. Tommy Collins picking up the win in the Crate Sportsman feature made it two-for-two of that division being won by racers who do their weekly racing here in the Southern Tier. Collins who races this season at Outlaw and Five Mile Point and race one winner Alex Yankowski who I believe will race at the Point also. Yankowski who is 13-years-old was not eligible to run at Bridgeport Speedway. Shayne Spoonhower, who races at the Thunder Mountain Speedway, was fourth in points going in and was looking to move up on that.  He got caught up in an accident after having to start in the back when returning from a flat early in the feature. He ended up after the final rundown with a sixth in the point standings. The three other Southern Tier pilots in attendance were Corey Cormier who will run Afton Motorsports Park this season finished 2nd in his number 20. The other two were Modified competitor Andy Bachetti who races Afton finishing in place fourth with his potent No. 4 car. Danny Creeden with his 16x came home in position 15 after a late race tire going down. Creeden will be racing Accord on Friday and Five Mile on Saturday. The features had 28 starters in both the Modified and Sportsman and all 12 of the Outlaw Stocks took the green in the feature meaning 68 racers went home with cash and prizes. The final three numbers that I am going to throw at you are these and they all are triple digits. The Modified winner Jeff Strunk was behind the wheel of the 126 and Sportsman winner Tommy Collins piloting the 713. Final one is one that means nothing to nobody but me but am going to tell you anyway because it is my article and with the visit to this new track my track total is at 106.


Congratulations and Thank You’s:  I want to say congratulations to all of the winners and of this race. Here is where I say congratulations to Outlaw Stock winner Jeramy Doerr as he was a late entry started last and came to the front in a hurry. The car looked as if it just got finished as it was black with no lettering at all and no number but I remember the name from past visits so I was sure it was going to be fast. Thank you going out to Brett and Heather Deyo and their entire staff as I always feel welcome and when Delores is with me she feels welcome also. I want to say the same to the entire staff at the Bridgeport Speedway as the welcomed us and the staff is always pleasant and this time people were saying hello and speaking my name that I don’t even know. Also thank you to Bridgeport and Brett Deyo for the getting Delores and I into the the Walter Chernokal Media Room as that was a very pleasant surprise.

Couple of big Highlights: For folks that have never been to this fine facility I must tell you about their feature line-up behind the stands it just great. I personally didn’t go down this time but to get up and see the drivers is great as you get to see the ones that put on the show. The expression on the youngsters face are priceless and they are the future so if you can do things for them it is great. As a matter of facts many of the adults smile ear to ear with this too. The track has a huge wooden truck for the kids to get in and also a bounce house to help entertain the children. A band is playing music before the races and during any down time to enhance the fan experience. I am sure some folks might think it is loud but you just need to move away a little.

Upcoming Events: Friday test and tune at the Afton Motorsports Park weather permitting and as of this writing not sounding good. Afton also is having one on Monday May 7 that should get in leading to their twice rescheduled opener to Friday May 11. Saturday will see race number one of the season at the premier Saturday track in the Southern Tier Thunder Mountain Speedway for a full card of racing with points getting underway for the track points and the American Racer Cup in the eligible divisions. The Modified will be featured in a $1992.00 pay day for the winner. One quick note here also to remind Crate Sportsman teams that weekly payout for you on the Mountain is $1000.00 to win and $100.00 to start. Sunday highly anticipating the opening of Utica-Rome Speedway with the DIRTcar 358 Modified becoming the new headline division. Monday as said above back to Afton for test and tune and then Tuesday to the Orange County Fair Speedway in Middletown N.Y., The event is race number one of the STSS for the Bob Hilbert Sportswear Fueled by Sunoco Halmar International North Series event for the Modified. It is the ‘Hard Clay Open’ that was postponed from its earlier scheduled date. Now the track has been leased from the folks from Halmar International and they are putting money in the old girl and I for one can’t wait. Hope to see you at