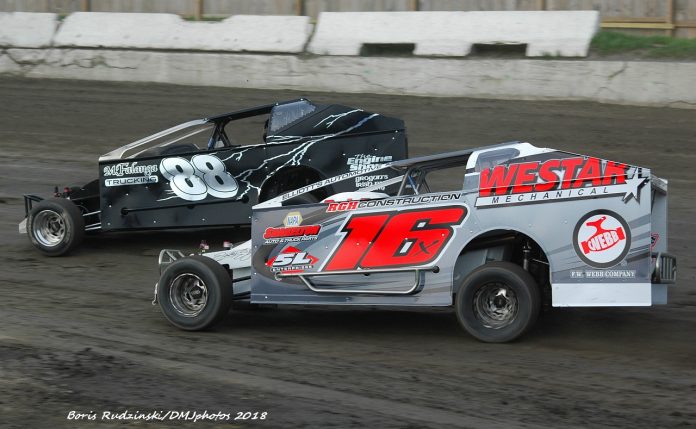 In years past, Danny Creeden might have taken a tire iron and cracked the official upside the head for giving him a hard time about something. Now, Danny is a more mature and focused racer and father. For the first time in his racing career, Creeden has all the best equipment at his disposal for an all out assault on the Short Track Super Series. There is one thing missing though, a Saturday night home.

On Friday at 1220pm Danny Creeden received a call from Five Mile Point Speedway owner and promoter Andy Harpell. The conversation was short and sweet. Thanks for coming last year but don’t come back here on Saturday nights. Like a kick in the teeth, Creeden felt so low that he contemplated quitting racing.

“I quit on Tuesday because I am so tired of the promoters trying to control your destiny. You wouldn’t tell Matt Sheppard not to come to your track because your winning. What you should do is tell your competitors to step up their program so they can beat Matt.”

On Saturday night Creeden brought a new unraced Teo to the track for its maiden voyage.


He wasn’t expecting to be at Middletown.

“I had a handicap from the last time we raced here and with no Five Mile Point, my car owners decided to come here. We are really close to here but we were all set to go to Five Mile Point. We had to change the body to make it legal and put Hoosier tires on it.”

Creeden started 10th in the feature and wound up with a second place finish.

“We crossed the scales and made sure that there was no funny business there and then we went to the tech area. I told George Johnson right up front that the motor in the car wasn’t legal there was no reason for them to pull the head and the headers off to check the cubic inch.  I was not and I am not looking for any issues with anyone. I felt that I needed to be upfront so as to keep the peanut gallery from gossiping. I was in a bind. My car owners who pay the bills told me to run the car to see what it has. I can’t tell you what we had in it but I can tell you that it only had about 700hp in it.”

Creeden went on to add,  “If I was to make a suggestion to the people running Middletown, I would say to leave the track surface alone. Its got bite, its racy. While I might be an odd ball who likes a little roughness, its a drivers track now. You have to race now so it fits my style.”

Creeden said he will be back to Middletown for Tuesday’s Hard Clay Open.

“Its a Deyo show and I will race all of his shows.”

As far as the long term outlook at Middletown, “I have legal small blocks for the small block shows. Chris Larsen stopped into to my trailer at the end of the night and introduced himself to me. He asked me to come back but I told him I don’t have a big-block. I would have to buy another car and acquire another motor. With what I got now, I have 7 cars and motors but some of them are open spec motors for big and small block. Its stuff for the Deyo shows or Five Mile Point, Afton or Accord.”

“If Orange County were to open up the rules and allow you to race those open motors than you would get Meier, Perrego and anyone else that wants to race bring those motors here. It might be fun to see different engine combinations race in the big-block division but it opens up a spending war. Similar to what the Deyo series has. You got teams that can get all kinds of motor combinations and you have to keep up with them. Something probably should be done to reign things in. We didn’t have all these motor combinations a few years ago.”

Creeden was involved in an accident last Sunday at Bridgeport and wanted to clear the air on the accident.

“I was racing hard having an outstanding day when all the sudden as I exited turn two, one of the three belts broke and next thing you know I’m trying to gather up the car and I had no idea that Frank Cozze was next to me. I didn’t deliberately crash into Cozze. In fact, Cozze has helped me in years past with my Sportsman stuff. After the race I felt totally disgusted. I took my wife’s advice and I just packed up and moved on. I didn’t want to go over there and try to explain what happened. I’ve learned just to move on and go home.”

A more mature Creeden is what we got now a days. No longer the big guy who would fly off the handle and look to short term rage outbursts to help prove his point. Now married with a darling daughter who is the apple of his eye, Creeden is looking to show his fans and fellow competitors that he belongs. He has all the tools at his disposal this year to be successful anywhere he goes.

Changes- “Just going to have to be a different man, Time may change me” Changes by David Bowie.