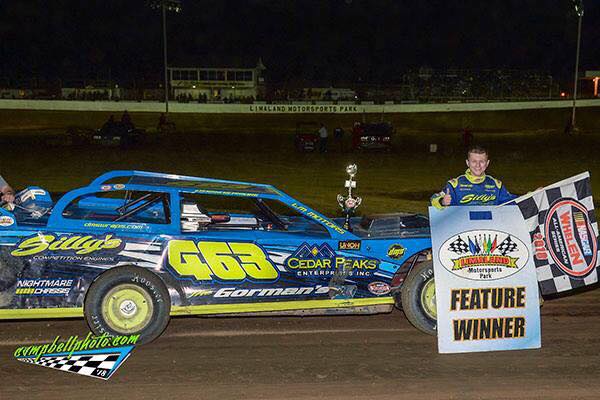 4WIDE/Daniel Sanchez Racing – While Lebanon Valley Speedway may be his home track, West Sand Lake NY’s Daniel Sanchez is adapting well to his home away from home in Ohio. The UNOH student checks in to discuss winning the last two weeks at Limaland Motorpsorts Park in the Budweiser Thunderstock Class.

“Two weeks ago  at Limaland we had both cars out. Jordan Conover drove the Nightmare Chassis 463X and set fast time. I was driving the Silly’s Competition Engine’s 463, The car we call Big Blue. Jordan was fastest in his hot lap group. In my Group I was 2nd quick. Jordan broke in the heat ending his night.

For my heat I started outsi de front row battling for second with #26 Justin Long, the defending Limaland Bud Thunder Stock Track Champion, trading position lap after lap. My car was a little on the tight side allowing Long to get away. I finished 3rd in the heat as Justin Long would win the heat after he passed #27 Frank Paladino. The invert which is decided based on a card a fan picks either a 2, 4 or 6 on this Friday night was a 6. That started us on the pole for the feature. The crew worked extremely hard and efficient all night and made the right changes.

I took the lead on lap one. There was a caution on lap 2. The green came back out and I  continued to lead and as I took the white flag, coming off of turn two and do


wn the back stretch the yellow flag would wave. When the race resumed it was a white and then we had a checkered one lap shootout. Justin Long and the #22T of Tony Anderson were right behind me coming out of turn 4 long dropped down low but I was able to hang on for the Win.

The biggest thing we have really been focusing on is setup and making sure we are prepared for anything. Building the team and the knowledge will really help us at home. We still have over 40 races left on the schedule and will be focusing on points at both Limaland Motorsports Park and Eldora. The last few weeks at Eldora have been tough but we are figuring things out. With our Silly’s Competition Engines and our Nightmare Chassis and Big Blue we are really looking

forward to having some fun at many different race tracks. As of right now we will be trying to attend about 10 different tracks.”

I started 4th and going into turn one on the first lap I pushed way high and lost 4 spots. Racing my way up through the field with a caution I found myself 5th. On the restart I went low and came out of turn 2 running 3rd. A lap later the caution came back out. On the restart I figured I would try the same move and it worked about the same I came out of turn 2 a nose ahead of the Dan Wooten’s #7 and would complete the pass. The caution woul d come back out with 6 laps to go. On the restart I resumed the lead and with a few green white checkered attempts I finally crossed the line winning the race.

Big Blue is definitely #SetOnDig with our Silly’s competition engine. We had some help from Kyle Moore’s team and we have also teamed up with Nightmare Chassis which has been a tremendous help for us. The nightmare chassis team has been working very hard and making gains. Jordan Conover has been running the 463X stock car and has been super fast but with no luck. In the new Nightmare Chassis Modifieds the team has been searching and finally hit something good Saturday night at Waynesfield Speedway. Jordan was only a few Tenths off the track record during time trials and qualified into the feature through his heat. Started 15th and made his way up to 12th at a very small and hard racing track. Teaming up with Nightmare Chassis is one of the best things that has happened to us since moving our racing program to Ohio. The Conovers and their team are some very smart and extremel

y nice people. I’m excited for their modified program, keep an eye on them, that’s for sure.”

To stay up to date with Daniel and his midwest racing follow along on the teams Facebook Page : Daniel Sanchez Racing Fan Page