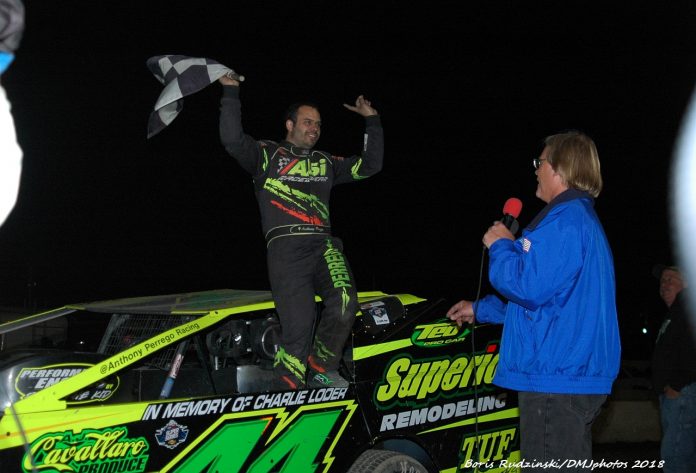 MIDDLETOWN, NY- Anthony Perrego has figured out something at “The House of Power” He’s fast and its noticed by anyone that’s watching his performance. This week Perrego didn’t start close to the front, he started 14th and still managed to work his way to the front for his second win of the season.

Donnie Wilson and Danny Kronk lead the field to the green for the start of the 30-lap feature. Wilson set the early pace leading the first 6-laps of the feature before the first caution of the night flew.With the field regrouped it was back to green and once again Wilson was your race leader. With the track surface having some ruts and holes in it, Wilson was hanging onto the car with all his might. Coming through turns 3, and 4, Wilson’s car was jostled into one direction while trying to steer it into another direction.

Caution flew again on lap 11 this time it was for Jimmy Horton who dropped out of the feature and for Jerry Higbie who had damage to the right side of the car including a rub rail that was hanging and a flat right front tire. Higbie was racing well inside the top ten when his car was mangled up. He would later rejoin the field. The field regrouped and attempted to go green and an immediate caution came out for third place runner Chris Schultz who got turned around on the restart.

With 14 laps of the feature in, Anthony Perrego blasted into second on the restart and one lap later exiting turn four he overtook Donnie Wilson for the lead. As Perrego was checking out, Wilson was now having his hands full of invader Danny Creeden. Creeden driving his new Westar Mechanical 16x, took control of second just one lap later on lap 18 with a fourth turn pass of Wilson.


As Perrego began to stretch out his nearly 5-second lead over Creeden, he hit lap traffic as the feature wound down with just 3-laps to go. Perrego went on to score his second win of the season and in a row over Creeden, Wilson, Cronk and Billy VanInweegen.

“When the race began, the dust was really bad, I didn’t think we had anything for anyone starting that far back.”

As he wiped the dust off his face in the tech area, Perrego went on to add, “The holes in turn one and two were throwing me off but in three and four I was pretty good. I had to slow down to go fast.”

News & Notes
A surprise post race inspection was held for the big-block modified top five. While in the tech area, the device to test the cubic inch of the motors broke. Only Anthony Perrego had his engine tested before the device broke. A representative from Billy VanInweegen’s team was less than thrilled to go through the tech process. “The way our headers are we couldn’t really get to the cylinder they wanted to test so he said we could use the number one cylinder. Now the device is broken after we take the valve covers off and back off the valves. You couldn’t make this up.”

Danny Creeden made another apperance at Middletown. However he wasn’t expecting to be back for Saturday. Creeden who normally races at Five Mile Point on Saturday’s was called on Friday at 1220pm and was told not to come back by promoter Andy Harpell. Creeden finished second on the night but the motor in the car wasn’t legal for competition in the big-block division. More on this in a secondary story here at Dirt Track Digest.

“Last year I finished second, tonight I thought I had the win in hand but Danny and Anthony are really hooked up,” Wilson added.  “I’m building another car like Anthony’s with that rear suspension. I’m just not sure when it will see the track”

Jimmy Horton will be in competition on Tuesday for the Hard Clay Open and will also be at the upcoming Super DIRTcar Series race coming up at Bridgeport Speedway in NJ.

When asked about his recent experience at the new 3/8 mile Bridgeport track Horton said,  “It may save on the motors but its probably going to be a little more expensive since your racing so close together. Its tough to race there because the lighting is poor and the track surface changes with the elevations out of turns four and entering turn one.”

Bob McGannon who had a top 10-finish on the night after starting 22nd in the feature, announced that after 34 years he has sold his excavating business.

“I sold it to someone and I’ll work a few days a week with them but after 34 years it was time.”…

“We are just so busy at work I just don’t have the time to put the effort into a car for this year. We are going to go back to Daytona in February of next year.”

When asked what its like to drive at the world famous super speedway, “It’s like driving on the interstate but with a lot more cars around you. Its unnerving to be in the big packs because if there is an incident you have no time to react. Your just going to be a part of the accident.”…

Small-block Modified teams will be in action the next two weeks. Including a double feature in two weeks that will pay the full purse for each feature instead of splitting the money. Also its been speculated that the 358’s will race for more than $750 to win…

The half covered grandstand was ripped down to its shell. Its been reported that the grandstand will reopen as early as Tuesday. They have removed all the wood from the entire bleacher. Also, turn four is now open again with an aluminum bleacher that will soon be raised up higher. Signs of major projects are everywhere. Word has it that there could be a suite built in turn one and a beer garden or similar outside of turn four to allow patrons to see the racing while mingling with each other. Currently the fans can go to the 31st lap bar and enjoy a cold beverage while watching the racing on tv…

With the half covered stands closed, long time track videographer Tommy Czaban had to rent a scissor lift to film the racing…

No passing ? Tommy Meier, Bob McGannon, Anthony Perrego and Danny Creeden all marched to top 10 finishes after starting deep within the pack.