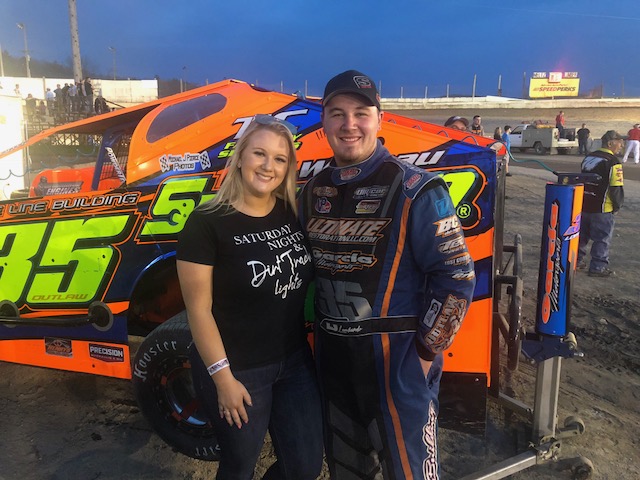 The best laid plans can’t always outdo mother nature. The Great Race Place pushed their show as much as they could on Friday night and were able to complete qualifying heats and run a quick round of hot laps. But when the first feature was brought to the track the sky started its own fireworks display with lightening before the heavy downpour and it was a real heavy downpour, so much so that we sat in the parking lot and watched the cars try and get out onto Route 9 creating a backup of heavy traffic that complicated the travel plans of all trying to get home. For Albany Saratoga there was nothing left but to call the show. So far this has been one of the toughest starts to a racing season for all local tracks. Earlier in the evening we stopped by the No. 19 of Jessey Mueller who has a DKM chassis under him this season. Jessey is looking better week after week and on Friday he battled in his heat race with Max McLaughlin driving the Al Henke No. 6H. Max is a second generation driver, the son of Mike “Magic Shoes” McLaughlin who many of the older fans will certainly remember. Max says he loves the Malta oval and wishes he could race on more of the small tracks. Max will next race at South Boston Speedway in southern Virginia on the asphalt but says he would rather race on dirt. Jessey Mueller will be racing on dirt all season. Even though the North Country driver has been in victory lane on asphalt at both Airborne Park Speedway and Devil’s Bowl Speedway he is yet to find victory lane on dirt. Mueller has been in the DKM chassis car since last season and whenever he has a question he goes to Kyle Hoffman of DKM chassis for both information and help.

As we walked down pit road we spotted the racer of Jim Nagle, the No. 10J with a new sponsor on the side. On Demand Handyman is new this season for the Nagle ride and we spoke with the Handyman himself who said he is glad to be there to help Jim because he enjoys being at the races and being a part of the show. Another new sponsor for Jim this season is Adirondack Auto which many may remember as the owner and sponsor for Mike Perrotte for many years before he took the N.E. Super DIRTcar Series Director job.

Going into Howie Commander’s high banked Lebanon Valley on Saturday there were nearly 120 racers and so many stories to tell that it’s difficult to decide who to talk with each week. For one, Mikey Albreada, daughter of Robert and girlfriend of L. J. Lombardo was just accepted to study abroad next semester in Florence, Italy at the Florence University of the Arts. Mikey was a very happy young lady when we spoke with her on Saturday and L. J. was very proud of her determination. And before the evening ended Mikey and L. J. had one more thing to celebrate and be proud of, his win in the Modified feature. Lombardo bested the 24-car field of Lebanon Valley drivers, some of the best in the business. Earlier in the season we read on Facebook that L.J. felt he had the power plant that he needed to take on the high banks and on Saturday he proved he did as his No. 35 Modified was power by a Billy the Kid engine. And it was a borrowed house motor because Lombardo’s engine was in Billy’s shop being repaired. The top four finishers had Billy the Kid power plants under the hood. It was great to talk with L. J. and Mikey in victory lane once again; they are a great couple.


Bobby Gaskill is a familiar face at the Valley, he raced there from 1968 to 1980 when he retired from racing and became a fan missing very few nights in his tower seat on the second floor, and before that he sat in the stands. Bobby said he has seen many changes from his seat over the years and most have been beneficial to the sport. We know if you live most anywhere in the Capital District of New York on Sunday it was raining unless you were near Glen Ridge Motorsports Park where it wasn’t raining and hadn’t all day according Mike Perillo when we called. We looked at staying home because it rained at our house all day but Mike Perillo confirmed that there was no rain at the track and they were running. And there was no rain until 17 laps into the final feature. They almost made it. Andrew Buff won the last race of the night, the Crate Modified event, his first win at the track and only his second time at the track in three years. Posing with his four younger brothers in victory lane, Andrew said he wished he could have completed the 30 laps but a win is a win. He also said he loves the short tracks. The Buff family racing began in 1996 when Kevin Buff started his career. Kevin stopped racing when his boys wanted to start. Andrew also races at Albany Saratoga on Fridays.

Once again we say rain, rain, go away. Until next time please send all news and/or comments to biittig@yahoo.com