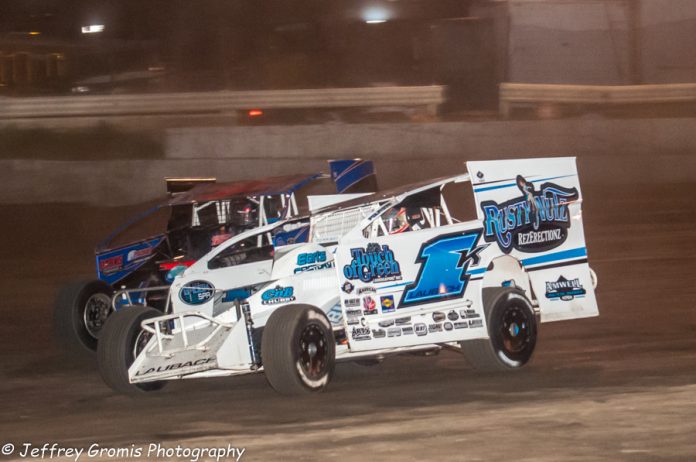 Stewart Friesen has been on good run so far in 2018 and on a rare mid-week show at the Orange County Fairgrounds, Friesen was able to keep the momentum rolling along as he dominated the star packed field in winning the “Hard Clay Open”.

The full-time NASCAR Camping World Truck Series driver has been on quite a roll with both his No. 52 Chevy Silverado truck along with his No. 44 dirt Modified. Friesen did hit a bump in the road at Dover, Del., on Friday when a tire blew sending the Sprakers, N.Y., driver hard into the wall but the talented wheelman came right back on Saturday night with a solid second-place finish at Fonda and continued the momentum last night with his dominating effort.

The Halmar team has been clicking and Friesen talked about the way the team is performing.

“It’s been awesome so far. Billy the Kid builds us some strong motors and the Halmar team gives us everything we need to be successful. Our DKM chassis worked to perfection tonight for sure. I got a great group of guys who build me awesome race cars along with a bunch of great product sponsors. Combine all that with the great group of guys who have been together for almost three years now and it just all fits together like an old shoe.”


Friesen started the race in the seventh spot and it took only ten laps to power around a hard-running Ryan Godown to take the lead. As easy as the race seemed to have been for Friesen, there were numerous caution flags thrown throughout the 50-lap feature event each time erasing the big lead that Friesen had built up. But restarts were not a problem for the former STSS champion as he sped away easily each and every restart as the field battled behind him. As talented as the field was for this year’s race, there wasn’t anyone who was going to catch the Canadian superstar on this night as he sped under the checkered flag for the big $5,000 plus victory.

It was Friesen’s 11th career STSS victory cementing his spot as the all-time leader in that department and it also was the second time Friesen has visited victory lane at the “Hard Clay Open” having previously won the event in 2015.”

2018 has been a little different for Friesen in the aspect that the truck series ride has been his ultimate priority with his dirt racing coming second. With that being said Friesen has not been around the shop as much as he used to be having to rely on his crew more and more to prepare the cars, so they are ready to go when they show up at dirt race.

“It’s definitely a little different,” cited Friesen. “As I have to put a lot of faith in others. The two guys that work in the shop Eric (Mack, crew chief) and Tommy are two of the best and they always have the cars ready for me when it’s time to go dirt racing. Our whole group is a great group of guys and we have a lot of fun with it. Chris (Larson) from Halmar gives us everything we need to win and it’s just a matter of us doing it.”

Winning at Orange County Fair Speedway is always special to Friesen and the win tonight was no exception.

“Man, I love this place,” Friesen noted. “It’s been a special place for me since I first raced my Sportsman car here when I was 16-years-old. The weekly racing here is tough, matter of fact it’s probably the toughest around and I know because I did it for a year. I’ve learned a lot about running these big races here, especially the Eastern States races by following Brett Hearn around this place for a lot of years and now I think we got something good for this place and it showed tonight.  The car was on rails tonight and we were able to keep it nice and straight coming off the turns and if you can do that consistently you will be successful here.”

Although standing in victory lane at the end of the night is always a happy experience, tonight’s was extra special as Friesen’s wife Jessica and their young son Parker were there to celebrate the victory as well.

“It’s always great to have Jess and the P-man with me in victory lane,” Friesen mentioned. “Jess works so hard with the t-shirt business and I’m super proud of her and what she has done to build up the business. We’ve done some cool shirts here recently for Jeff Strunk and Albany-Saratoga and it’s pretty neat. It’s a business I thought I would never be into, but we are. Bob Hilbert has been a great mentor for that part of my life just like Brett Hearn and Danny Johnson have been for my racing, so I look up to Bob and his products and we’ve learned a lot from him over the last couple of years and Jess is doing a great job with it.”

Laubach Leaves the Hard Clay with a Second Place Finish

Rick Laubach had a plan going into 2018 and that plan was to try and compete in both the North and South regions of the Short Track Super Series. Laubach has multiple cars at his disposal from no less than four car owners with the only question being. Would Laubach have the time to keep them all going? As much as Laubach would like to just be able to work on his Modifieds so they are ready for action, his business priorities have to come first at “Lightning Body” and “The Shock Spa” both business owned and operated by the “Quaker Shaker”. Combine that with the health struggles his parents are facing along with  long-time No. 7 car owner Lori Herrman who health hasn’t been good as well, Laubach has a lot on his plate to focus on.

Although you wouldn’t say that Laubach has had a bad season so far in 2018, it has not been what Laubach has been used to. His cars have been very consistent with numerous top ten finishes but that is not what a driver of Rick Laubach’s caliber shoots for when he straps himself into his dirt modified. The Hellertown, PA native likes to win and if that’s not possible at least come home with no less that a top five finish.

Last night at the “Hard Clay Open” Laubach did just that as he drove a great race in the Ryan Kerr #1K to an impressive runner-up finish. The second-place finish in  last night’s STSS race was extremely important to Laubach as he pursues the STSS north region title.

Finishing where he did almost guarantees Laubach a feature spot in the next STSS north race at Thunder Mountain on Sunday May 27th. Keeping high up in the north series points is an almost must for Laubach who will be seeing tracks in the north region that he has hardly raced on before with some having never been raced on.

“This is really big for our team,” said a happy Laubach as I talked to him while his car was being teched. “It’s hard to leave what I have going on to have to take off and go to some of these tracks that I’ve either never been to or maybe been to once knowing that you might not be in the feature. Finishing second tonight gives us at least a provisional at the next (STSS) race and then we’ll go on from there. We have some really fast cars and I think we can really do well on the series.”

Coming to Orange County Fair Speedway has always been special for Laubach and he always looks forward to attending the big races at the historic speedway.

“The Mile at Syracuse and this speedway have always been favorite tracks of mine to race on,” mentioned Laubach. “People probably think I’m nuts for thinking that but so what. It’s a different style of racing. You have to use your head and try and conserve your car and if you can do that you’ll do good. The style of racing is better with the quality of the drivers. You still have some minimal banging and bumping but that’s part of it. It’s cool to race here, there’s a lot of history at this track and from the things I’ve heard this place is going to be unbelievable when it’s finished.”

Mike Gular wasn’t sure what to expect Tuesday night when he strapped himself into the Terry Fasnacht #2A for the first time ever at the legendary “House of Power” the Orange County Fair Speedway. The Boyertown, Pa., driver did himself proud as easily qualified in his heat race and was racing well into the top ten when his car developed a flat tire bringing out the yellow. The crew changed the tire and Gular was back out in plenty of time to rejoin the field and at the end of the 50-lap feature event had worked himself back up to a very respectable 11th place finish finishing ahead of some of the best OCFS has to offer like two-time winner Anthony Perrego, Andy Bachetti and Jimmy Horton.

Talking to Gular as the team was loading their Bicknell chassis back into the hauler for the long ride home, the Grandview Speedway regular talked about how it was to race at OCFS  for the first time.

“It wasn’t bad, I can tell you it’s really intense to race here. There is lot of choices to make with your tires and having no experience here didn’t help us with that. The racing here is aggressive, and you really have to race hard for every single spot. There’s no gimme spots here at all and if you bobble you’re going backwards. Overall, I had fun and we’ll be back. We learned a bunch tonight and hopefully we’ll be better off the next time. That being said, I think if we didn’t have the flat we’d have finished in the top ten. I don’t think we could’ve done any better than that though. We’re happy with how it went tonight and now it’s on the next race.”