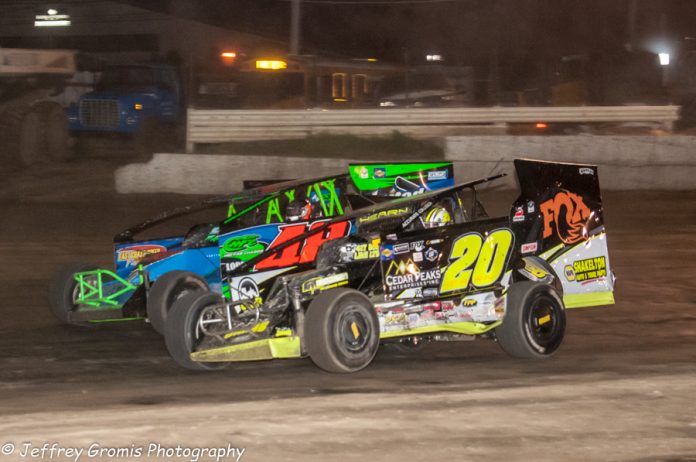 Luckily for Jerry Higbie Jr., in racing it’s not how you start, it’s how you finish. The Newburg, N.Y., driver struggled out of the gate in the 50-lap ‘Hard Clay Open’ with his Steve Lowitt owned No. 48.  Higbie just rode it out waiting for his car to come around.  Eventually it came on at the right time.  Higbie made up several spots late to work his way back on to the podium at the conclusion of the race at the Orange County Fair Speedway.

“I was a little too tight in the beginning and I waited for the race to come to us,” commented Higbie afterwards. “Around lap 15 I was running 10th or 11th and hanging out there. I was struggling. I was waiting for the track to come apart and slow down. Sometimes this track takes rubber but I knew tonight it was going to slow down and that’s what happened.”

Higbie was driving a Hig-Fab built machine outfitted with a brand new Billy the Kid Performance Engine 358 powerplant. The new combination is just what Higbie needed to go along with his pole starting position in the heat race. That combination was enough to put him in the redraw. He won his heat before starting ninth in the main-event.

“It’s the same car we ran last year so we had a pretty good idea about setup stuff,” said Higbie. “Steve Lowitt went ahead and put a new engine program together and it was phenomenal. The thing ran great. We drew pole for heat. At Middletown that helps and then we were fast enough to win that. We got a decent redraw and started ninth.”


Higbie’s patience began paying dividends by lap 30 as he started marching he way back forward. He was aided by multiple cautions that put him in the preferred restart lane on the outside. On the final restart he beat Brett Hearn off the second corner to steal the third spot away.

“By lap 30 or 35 it started slowing down and guys were coming to me,” mentioned Higbie. “That played into our hands. Then at the end I ended up on the outside eighth, outside sixth, outside fourth outside of Brett (Hearn) with a few to go. I was able to roll the outside in one and two and pick up spots then run back down into the groove.”

Higbie plans to compete in every Short Track Super Series North Region event with the Lowitt ride. So far the new engine combination is working out well. He’ll hope it continues at the next event at Thunder Mountain Speedway on May 27.

Hearn Makes Up Lots of Ground

If there is one driver at the Orange County Fair Speedway that can overcome a poor draw and qualifying effort it’s Brett Hearn. The Sussex, N.J., native sits atop the all-time wins list at Orange County.  He started eighth in his heat before failing to transfer to the feature. He grabbed the win in his consolation earning him the 23rd starting position. From there it was a battle to get to the front. He eventually got there to finish in fourth.

“We had a really good car in spurts,” stated Hearn. “It was really good in the middle stages of race, but some of the body work came loose and the motor started to get a little bit warm. I started to lose a little bit of power there at the end. Any time you can come from the consi here and survive, we are all tore up, but we finished and I’m very happy.”

The biggest factor allowing Hearn to make his way to the front besides a good handling car was patience. He’s raced Orange County enough to know to pick his spots.

“I think it is more patience, picking the spots when you can and laying off guys that are out of control for a little while,” stated Hearn when asked how he was able to move his way up. “Let them guys get sorted out. I was just trying to stay out of trouble.”

Decker Drives from Deep to Fifth

Hearn passed a lot of cars, but that fell a spot short of Billy Decker’s drive to the front aboard Jeremy Smith’s No. 91. Like Hearn, Decker transferred through the consolation after coming up short in his heat race. From there the Unadilla, N.Y., pilot fought hard to the place in the top five.

“We started eighth in pretty solid heat race and I made a bad decision in turns one and two,” commented Decker. “I thought I was going to get some spots and ended up not getting any. We raced really hard and came up one short. We ran second in the B and started in the back.”

As for the feature, “We were pretty good, but I was so tied into one groove on the race track. Then the second groove up top got a little marbley there toward the end. Everyone got a little more single file and that messed up our momentum. Our car was pretty good. I’d make a few more adjustments, but we were scrambling all night so we are happy to get out of here with a top five.”

Ryan Godown lost a potential podium finish when he got a left rear flat late in the go in the 50-lap feature. Godown led the first nine laps before Stewart Friesen took the lead away from him. Eventually Godown’s night came to an end in his Dieter Schmidt owned No. 5 when an oil line broke causing him to lay fluid down all over the speedway…

Mat Williamson’s night was over before it started. The St. Catherines, Ont., driver burned a piston in the engine during hot laps.  He did not start the heat race or the consolation event…

Anthony Perrego put on a charge working into the top five from 17th. The two-time Orange County Fair Speedway winner this season eventually suffered a flat tire in the late stages on a restart. As a result he was forced to pit and make a change finishing 16th…

Andy Bachetti lost his spot in the top 10 when he broke something in the right rear suspension. Bachetti pitted for repairs before getting the “lucky dog” to get back on the lead lap. He ended up 15th…

Danny Johnson drove his way into the top five early and got as high as third in the running order. Johnson’s night eventually came to an end when he got a flat tire on lap 31. He returned to complete one lap before retiring from the event…

Matt Sheppard’s left side sail panel flopped over early after some contact on the start. Under an early caution Sheppard pitted to get repairs made to the sail panel while also putting on new rubber. He took advantage of every restart in order to move his way up through the field before eventually finishing eighth.