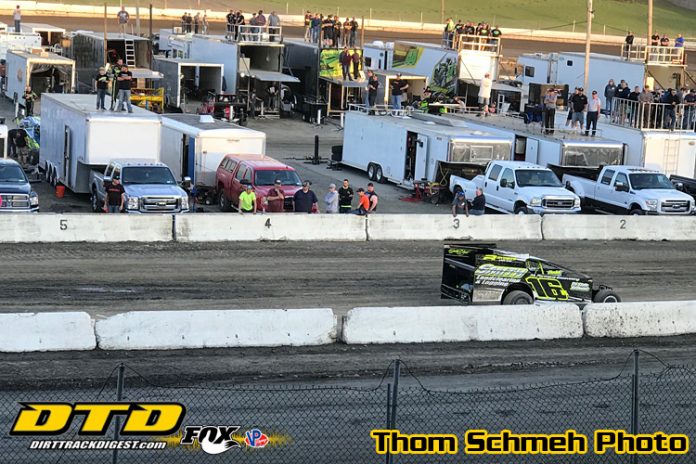 I guess rain is to be expected in April and May, but Friday’s poor racing weather again threw me a curve ball. The Hill Speedway on Dunn Hill Road in Monroe (also referred to as Monroeton), Pennsylvania, was my first stop on Friday, May 4, although the bad forecast caused them to change their opening day to just a practice day. I guess the promoter didn’t want to take a bath, but that decision caused me to head on down the road in search of another ‘new track’ for me. However, before I left, I had to take a couple of pix of “The Hill,” which features a smaller Pennsboro-like hill (with no grandstands) and a ‘Park-n-View’ lot. I will be back to this grass-roots venue.

My next stop was the Clinton County Motor Speedway in Mill Hall. This has been a ‘bucket list’ track for me personally, as it is not all that far from my new home in Owego, New York, and it hosts some premier classes over the course of the season. On Friday night, the Laurel Highlands Sprint Series (LHSS) was on the card, replacing last year’s PA Sprint Series (PASS) as the resident track sanction. Both are winged 305-cubic-inch sprint car organizations, with Kyle Ganoe the early-season LHSS point leader. However, after thirty minutes of hearing every curse word known to man by the racing team/family next to me in the grandstands (just awaiting hot-laps), the rains came and washed out the night’s activities (and possibly their mouths). Saturday was a great day for me personally, getting to renew friendships with present and past drivers like Johnny Herrera of New Mexico, Doug Strong of Montana, Skylar Gee of Alberta (Canada), Travis Rilat of Texas and eight-time Empire Super Sprints (ESS) champion Mike Woodring of New York. Prior to last Saturday at Selinsgrove, my most recent visit to the Knoxville-like motor-n-momentum half-mile was in 1989 for a United Sprint Association (USA) race. Johnny Herrera said his last visit was in the mid-Eighties for a World of Outlaws (WoO) race. Thanks to Mike Woodring, I also got to meet Paige Polyak of Ohio, whom I have seen several times at the Knoxville (Iowa) Raceway.

Doug Strong of Billings, Montana, ran late model stock cars from 1979 through ‘82 and then sprint cars from 1983 through ’96. He also traveled, of which you do a lot in Big Sky Country, to compete against Ted Johnson’s WoO troops and Ralph Capitani’s Knoxville (Iowa) regulars. Tim Gee, originally of Whitehorse, Yukon Territory, in Canada was one of his competitors. Today, Doug sponsors Ruth and Tim’s son Skylar Gee, who is a teammate of USA and Australia racing veteran Travis Rilat and youngster Robbie Price (British Columbia, Canada) on Bryan Sundby’s team on the tough ASCS National Tour. Sundby is from Newton, Iowa, former home of Maytag washers-n-dryers and current home of NASCAR’s Iowa Speedway.

**Did you know that Tim Gee’s father Gordon ran #77 on his stock cars back in the day in the Yukon, while son Tim used #88 on his WoO A-Main-winning sprint car at Paragon (Indiana) Speedway on July 13, 1983, and hockey-playing grandson Skylar has #99 on his ASCS sprint car today? Gordon Gee was also elected to the Yukon Transportation Hall of Fame last year (2017), recognizing his trucking company’s many years of service to the mining industry.**

**Did you know that Doug Strong was the 410-cubic-inch Montana Open Wheel Racing Association (MOWRA) Rookie of the Year in 1983, and that he went on to win the sanction’s point title in 1987? He also won the point championship for the 360-cubic-inch Montana Sprint Tour (MST), a group of which he was president. Today, Doug’s son Cam Strong plays NCAA Division 1 Men’s Ice Hockey for the Dartmouth University in Hanover, New Hampshire, in ECAC Hockey and Ivy League competition.**

In addition to renewing acquaintances with the drivers, I also spent some time at Selinsgrove with friends Lou & Betty Long (Pittsburgh), Gordy Killian & Adam Zappacosta (Reading), and Felicia & Sharon Williamson (Palmyra, Penna.). Lou is a former board member of the non-profit National Sprint Car Museum and he currently writes for Area Auto Racing News (AARN), which I believe is the last remaining weekly racing newspaper in North America. Gordy is a ‘Super Fan’ or ‘Track Chaser’ and the host of an annual Chili Bowl-watching party, which once featured National Dirt Racing Association (NDRA) Knoxville competitor Kenny Brightbill. And Sharon and Felicia are wife and daughter of the late Kramer Williamson, a National Sprint Car Hall of Fame inductee, respectively.

Getting back to the 41-car ASCS vs. URC vs. Selinsgrove Posse racing, ‘locals’ Blane Heimbach ($5,000), Trey Starks and Davie Franek swept the podium for the second night in a row. Although Hodnett is originally from Memphis, Tennessee, and Starks is from Puyallup, Washington, both now run in the Keystone State for Commonwealth car owners.

The heavy rains that cancelled the Lincoln and then Port Royal races moved into Selinsgrove minutes after the checkered flag, postponing the Limited Late Model and Pro Stock feature races. Another night of ‘camping’ at the R.B. Winter State Park followed.

**Did you know that on Sunday, October 1, 1939, two drivers lost their lives in the Southern Tier Racing Club (STRC) ‘big car’ races at the Scranton (Pennsylvania) Fairgrounds half-mile dirt oval? John P. Hoffman of Cementon, Pennsylvania, and John Gailet, Jr., of Johnson City, New York, both perished after two separate accidents on the track, also known as the Ackerly Fair Grounds and later the Lackawanna Speedway. Hoffman died instantly, while Gailet, whose grave is yet unmarked, died within 24 hours. Apparently those were the only two fatalities ever at the track, which is now site of the Abington ball fields in Clarks Summit, Pennsylvania.**