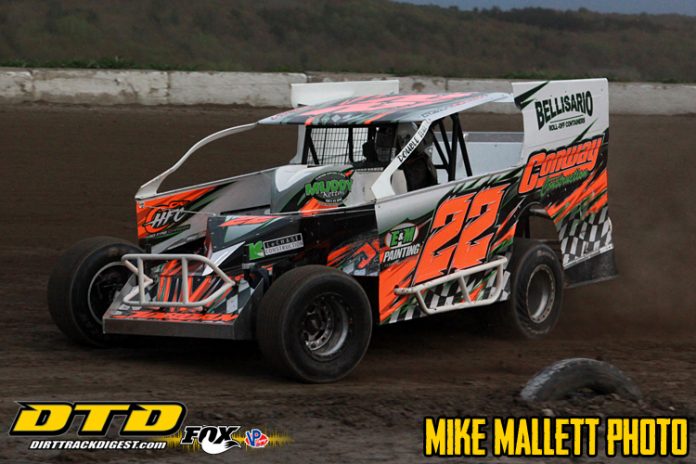 It hasn’t been the best of starts to the 2018 season for Speedsville, N.Y., driver Kevin Jordan. The former Open Sportsman competitor decided during the off-season to make the jump up to the Modified ranks. As of yet he just hasn’t been able to get things going to his liking.  He’s had his fair share of bad luck sidelining his efforts. On Friday at Afton Motorsports Park there was light at the end of the tunnel but he was still bit by the bad luck bug.

“I’ve been on a three month back luck spell,” said Jordan. “Last week we were going to the races and we got a flat tire on the truck and ripped my brake lines out. Then one lap into the feature my transmission broke. I haven’t had any luck this year so hopefully this is a change. We changed our luck a little bit coming in the gate tonight, we drew two. We checked out in the heat and the feature we were there. We can run with them. If we fine tune this car a little bit we’ll be good.”

Jordan elected to make the move to the Modified ranks after observing the lay of the land. As the Crate Sportsman class continues to grow car counts in his division have continued dropping. The writing is on the wall as they say.  For Jordan it was time to make a change.

“The open class is dwindling,” cited Jordan. “It was either go in the crate class or go into the Modifieds. I like the horsepower. I’ve raced Modified a couple times just throwing a four barrel (carburetor) on it at Afton and had a great car that could run with them. Most of the time the Modified drivers are way cleaner. The crate class is so competitive, so equal you get a bunch of smash and banging. I decided to go with the Modified. We’ll see how it goes and what we can do.”


On Friday night, the bad luck got him with only a few laps remaining in the feature. Kailee Dimorier spun in turn two causing the caution came out. With the yellow out, Jordan tried to avoid the crash scene and was forced to slam on the brakes. As he did the car stalled. As a result, he was put to the rear while running in the top five.

Prior to the issue under yellow, Jordan had a strong car, the best he’s had all season. He feels like the team found something this week on his Hig Fab that has improved the handling.

“I got the car handling now after we found a bunch of things wrong with it,” mentioned Jordan. “It was my own fault. Now it’s a competitive car. The motor runs great and we are close with car.  We decided last minute today to come to the race. With everything we did on the car we knew we’d probably have a pretty good car and we did. It was awesome.”

Jordan started on the pole for the 30-lap main. He hung with outside pole starting Andy Bachetti throughout the early stages before eventually a hard fought losing battle with Chad Cook. Both of those drivers know how to get around Afton so getting passed by them in nothing to hang your head about.

“The nice thing is Andy Bachetti is no slouch,” stated Jordan. “He started on the outside pole and didn’t pull away. I think I had as much as he did down the straightaway. He’s a great driver obviously. Chad Cook, he came from nowhere. I was there with them. I was trying to keep from breaking the car so I could race at the end. We did alright.”

Saturday’s action at his home track Thunder Mountain Speedway rained out early so the 54-year-old driver will now have to wait another week to see if he can completely get rid of the back luck. Hopefully Friday night is a sign of a turnaround for the 22 team.