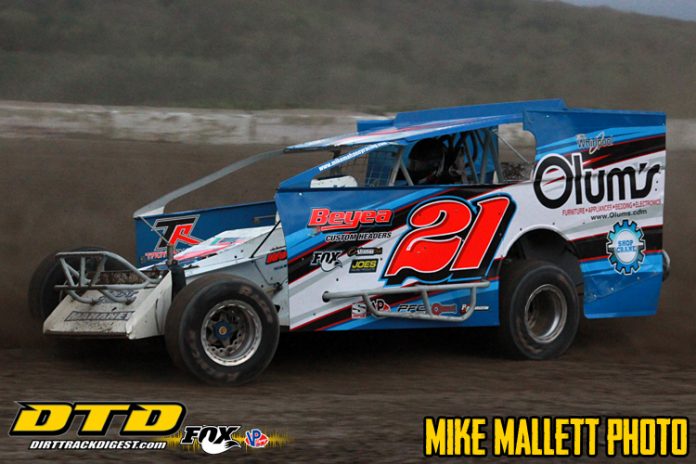 Timing in life is everything, including racing.

Mike Mahaney get a well-timed caution on Friday night during the Afton Motorsports Park season opener. The caution erased a full straightaway advantage for defending track champion Andy Bachetti while placing Mahaney on his rear bumper. Mahaney made sure to make the most of the chance.

At the green Bachetti didn’t get a great start allowing Mahaney to stay with him. As they raced into turn one, Bachetti went high with Mahaney filling the whole on the bottom. Some contact was made with Mahaney exiting turn two as the leader.

“I got to second with five to go and Andy Bachetti was well over a straightaway in front of me,” stated Mahaney. “I felt like I had fast car but I was too patient getting through traffic. When we finally got there and got a yellow with two to go, that was my opportunity.


“He slid up going into one and left the door open.  I filled the hole and came out with win.  If the caution didn’t come out I probably would have finished second, but luck was on our side for once.”

Mahaney’s day started with a runner-up finish in his heat in his Charlie Davis owned No. 21 placing him in the seventh starting position for the 30-lap feature. He was okay early on before beginning his march forward around the halfway point. He made a spectacular move in traffic to go from fourth to second on one lap.

“The conditions make you have to do that, but I didn’t want to wreck anybody,” said Mahaney about the spring track conditions and his competition. “I respect guys that race here at Afton. I’ve raced with them quite a few years now and I’m friends with a lot of these drivers. I was patient waiting for my chances.”

It’s the King Ferry, N.Y., driver’s first win of the 2018 season which began back in February at the DIRTcar Nationals in Florida. He’s run a handful of races since coming home, but hasn’t been able to find victory lane until Friday night.

“We’ve been able to race 10 times or so this year, we got a win now and that feels great,” commented Mahaney. “We really started hitting well at the end of last year and at the beginning of this year we’ve been solid. We’ve had some solid runs, but we weren’t up there in the top spot. This feels good and it feels good to honor to my sponsor Olum’s in their home territory because they give me a lot of support.”

Bachetti was the class of the field in the opener at Afton. Bachetti started the race from the outside of the front row after winning the second qualifying event. Bachetti was challenged once before halfway by Chad Cook before taking the pace to another level. Then the caution with two laps to go cost him the win.

“It was a pretty rough track and you couldn’t really tell where you were going there,” cited Bachetti. “We had that unfortunate restart and the holes won the deal. I couldn’t tell you if we had a good car or bad car, but we had a good starting spot that’s all. Sometimes the holes get the best of you. The race track did a good job. They tried to make it better all night long, hats off to them guys.”

As for what happened on the last restart, “Coming down the frontstretch I didn’t get a real good run. I got spinning where it was real loose. I was trying to miss the hole and get a run across the holes and it is what it is.”

Chad Cook ended 2017 on a sour note. The Deposit, N.Y., driver got over on his lid last August and that was it. His season was over. During the layoff the team laid out goals to come back stronger than ever. After Friday’s performance it looks like Cook is right where he needs to be with his Jim Ackley Engines powered Hig Fab.

“We had a rollover at the end of the year last year so we quit racing in August,” stated Cook. “From that point on our whole motto was to get a piece where we could run with Bachetti and tonight I think we proved that the work through the winter paid off.”

Cook started Friday night from the fifth position and quickly moved forward. By lap 10, Cook was in the runner-up spot and looking to challenge the race leader Bachetti. At one point he passed Bachetti for the position only to have him power back by moments later.

“He (Bachetti) slipped up and we had a good run,” mentioned Cook. “I actually got after it a little too much and washed myself out and opened the door up for him to get back under me.”

Once Bachetti got back by things didn’t go Cook’s way. Bachetti worked traffic quickly where Cook could never find the right opening. That ultimately cost him a shot at second as Mahaney was able to get by him later as well in the slower cars.

“Traffic was tough,” he said. “You get in them lapped cars and it is a crapshoot. I couldn’t get an open door no matter what I tried. I washed out and Mahaney and (Kevin) Jordan got by me. I got back by Jordan. Mahaney was quick and the door was open.”

25 cars made the trek to Afton Motorsports Park for the season opener. Kevin Jordan, Bachetti and Nick Nye were heat race winners…

Alan Barker was a start and park in feature after breaking the driveline in his heat race. Barker hit a tire on the inside of the track causing his car to launch into the air with only one tire on the ground. That caused the driveline issue…

JR Hurlburt’s day came to an early end in the feature after he caught the outside wall after contact with Jeff Sheely. Hurlburt indicated he broke the steering box and several parts in the frontend…

Drivers were faced with some difficult track conditions as the track came apart in the corners. The speedway put new clay down over the off-season and the spring hasn’t been kind to them with lots of rain and not enough sunshine. The Afton track crew did a commendable job attempting to work out the issues throughout the night. They took two pauses in the program the grade and roll the track surface.