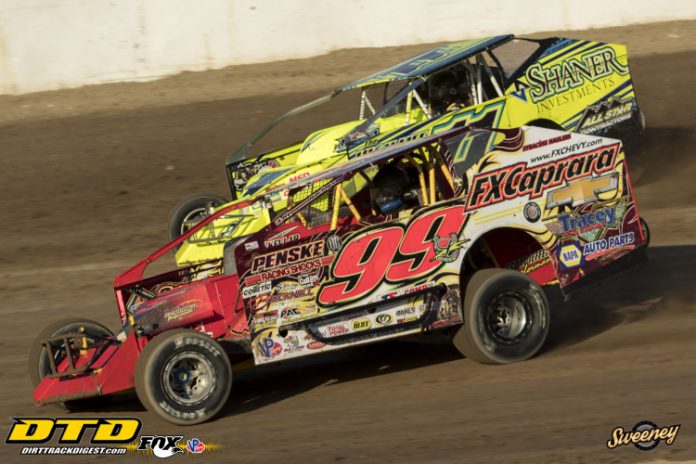 Last Saturday night Larry Wight watched a win slip through his fingers in the final laps of the 35-lap feature at the Fulton Speedway. Tim Sears Jr., went by and on for the win. This week, Sears nor anyone else would have anything for the Phoenix, N.Y., driver as he powered to his first win at the track in a 358-Modified beating out Tom Sears Jr.

By virtue of the handicapping, Wight started on the inside of the seventh row. By lap 10 he made his way into the top five, by halfway he was second. Then the dogfight began between Wight and Tom Sears Jr. Wight worked and worked before finally being able to complete the pass for the lead on lap 27 off the bottom of turns three and four.

“We definitely had to fight and claw for that one, especially because the top was so good,” stated Wight after his win. “Tom and I always run each other hard, but we always give each other just enough room. If you want to put it there you can. Tom is always good to race with. It’s nice to go to the small-blocks and still put on a good show. The track was pretty wide. We were able to come from 13th to the win so we’ll take that.”

Wight was able to take the lead after Tom Sears bobbled on the top side and hopped the cushion. The cushion was tricky and Tom Sears was dealing with a push on his No. 62s. That was all Wight needed to pounce.


“I was hoping he would just miss it because the motor was stumbling coming off the corner on the bottom so that’s why I couldn’t clear him,” said Wight. “As soon as I could get up to the top it ran a lot smoother with the higher rpm’s. Once he missed the top a couple times and opened the door I took it and shut it on him.”

The car that Wight drove to victory lane is one the he has been experimenting with. Last week there were issues but those gremlins were remedied on Saturday night.

“Last week we had a couple issues with the car,” cited Wight. “We had a couple things break on it. This is kind of an experimental car that we put together over the winter. We went to coils, went away from the torsion bars and so far is it working.”

Wight hopes the car will be good enough for another win this weekend as he’ll be at Utica-Rome Speedway on Sunday for the New Yorker 100 DIRTcar 358-Modified Series event.

Tom Sears Jr., did all he could to hold back Wight but he was just too much. Tom Sears car developed a push as the laps clicked off.  That was enough to allow Wight slip by for the lead and then the win.

“It was a good race,” mentioned Tom Sears. “It’s tough. You get off a little bit with these cars here and somebody is better they can run you down pretty quick. We were just a tick tight. The last two weeks we’ve been really tight. We made a bunch of changes. We gained a 100 percent on it this week but we still need a little more. There are still more cars that are better than us out there.”

Tom Sears indicated that he’s struggling to learn the new combination as he’s never run a small-block until last week. Everything that he is comfortable with doesn’t apply to the small-block meaning he has to learn a lot of things all over again.

“I’m a little bit older and these younger kids adapt to this a lot quicker than I do,” said Tom Sears with a laugh. “It is a learning curve for me on this stuff. Picking gear, we swapped around two, three sets of gears tonight. We are thinking the motor isn’t running good right, but we just don’t have the car good enough. The car and the driver has to step up.

“There is just some of the stuff you can’t do with these cars that you can do with a big-block driving wise as far as the moves you can make because the motor is so much different. The car just doesn’t react the same on and off the throttle. That is stuff I got to get use to.”

He didn’t win, but Tim Sears Jr., was turning laps just as quick as the two drivers in front of him. He simply ran out of time to catch them. Tim Sears Jr., started next to Wight in 14th but didn’t get rolling until after the halfway point of the feature.

“We had a real fast car, but we just ran out of laps,” mentioned Tim Sears. “There is nothing you can do about that. The race is only 35 laps so you need to get it done in 35 laps.”

Like Tom Sears, this is Tim Sears first time competing full-time in a 358-Modified. He’s continuing to adjust to the nuances of running the different engine combination. So far he seems to be adapting quite well.

“It’s definitely hard to get the runs on the guys, but we got a really good hot rod,” he said. “The car drives pretty good. There is still some tweaking we can do to get it a little better. We are still learning with these (358 engine), it is only our second race on them this year. We always ran a big-block so it’s just tough to get adjusted to them. You can’t make up the ground like you could with the big-block at the end the race. You got to drive them as deep and hard as you can the whole race. There is no room for error.”

Ward was one of the fastest cars in the field during the first half of the feature. Unfortunately Ward’s car got extremely tight as the laps clicked off causing him to develop a major push in the corners to fall to fourth after running as high as second…

Nick Joy, Austin Murphy and Chad Phelps made their first starts of the season at the Fulton Speedway. Murphy’s night end poorly with him being taken off on the hook. Joy ended the event 16th, one lap down.

Mike Bowman struggled throughout the feature after spinning early. Bowman indicated afterwards that something is amiss in the engine department…