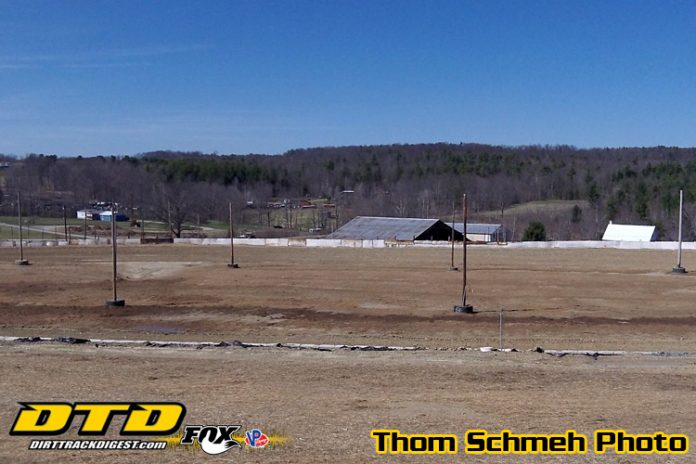 This past Friday, May 11, I went back to The Hill Speedway on Dunn Hill Road in Monroe (also referred to as Monroeton), Pennsylvania.  The (quarter-mile) Hill was apparently known as Ace High, Dunn Hill, Dunn-Hill and Dunn-Hill 2 since its inception in 1991, according to Allan Brown’s “History of America’s Speedways, Past & Present.”

**Did you know that, according to Steve Post of Motor Racing Network (MRN) fame, land owner David Dunn raced at another local track, Granville Speedway, and became disenchanted there, so he built this competing dirt track on his own hilly property.  The fifth-mile Granville oval was actually located in Granville Summit (Penna.) and also raced under the Endless Mountains, Summit and Redline names during its 1988-2009 tenure, also according to Allan Brown’s research bible.** The Hill Speedway is unique, to say the least.  Ten dollars was the admission price, which I thought was quite reasonable anymore.  There were no grandstands.  Just the hill for seating (lawn chairs or blankets) in front of ‘Park-n-View’ parking.  I was the first person there, so I chose a parking spot in which I could view the entire oval from my mini-van.

There were 43 cars total, which is not a lot for six divisions, although they did combine the Pure Stocks and Street Stocks on this overcast night.  However, they ran ten heats for the 43 cars.  You do the math.  The five features were headlined by the Crate Sportsman Modifieds, of which there were only eight.  If it were me, I think I would have combined the FWD Four-Cylinders and the RWD Four-Cylinders, and possibly the Economy Modifieds (like International Motor Contest Association or IMCA Modifieds) with the Crate Sportsman cars.


All in all, I will go back to The Hill Speedway, the 384th different track at which I have seen a feature race.  However, I won’t make a steady diet of it on Friday nights.  Speaking of diets, their hot sausage sandwich with sweet peppers and onions was outstanding and only four dollars. On Saturday, May 11, I headed along the back roads to the Woodhull (N.Y.) Raceway for their Patriot Sprint Tour (PST) show.  However, somewhere around Watkins Glen, I realized that they had already cancelled.  So, I switched directions and headed for Blodgett Mills (N.Y.) and the Skyline Raceway Park, which I hadn’t been to (like Woodhull) since my Mid-Atlantic Racing Series (MARS) dirt late model days in 1980.

**Did you know that Skyline Raceway, variously located in Blodgett Mills, Virgil and/or Cortland in the trade papers, was built, owned and promoted by Fay E. “Buck” Towslee in 1961?  He sold it to brothers Allan and Harold Grant in 1970.  F. Reed Bixler then owned and ran the track from 1973 through ‘78, before selling it to Bob Dunton.  He closed it in 1981, while running dirt Late Models as the top class, at the same time as Glenn Donnelly and DIRT cut back their Late Model division to focus on the Modifieds.  Cousins Frank and Gene Payne bought it prior to the 1988 season, with Frank and his wife Audrey buying out Gene’s half of the track property in 1993.  Today, promoter Dean Catlin is promoting the facility and he is in the process of buying it from the Payne family.** On the entire drive over, it was foggy and rainy. But, Facebook friend (and former DIRT Modified driver Darrell’s brother) Dale Welty kept posting that Skyline would get it in (when Woodhull and Thunder Mountain had already cancelled).  Dang if he wasn’t right.  Then, to top things off, he won the combined Open/602-Crate Sportsman Modified feature race over Jimmy Zacharias, Chris Jordan, former MARS dirt late model driver Jim “Rocky” Rothwell, Dustin Jordan, A.J. Potrzebowski (Sr.) and nine others.

Other classes on the evening were Pure Stocks, Street Stocks, Rookie Sportsmen (A.J. Potrzebowski, Jr., was the feature winner), Xcel-600cc Modifieds, and Mod Lites (like Dwarf Cars or Legends Cars).  Anyway, it was a fun night of racing and memories for me, despite the cold temperatures (and mist).  Admission was eleven dollars and hot sausage sandwiches were five dollars. **Did you know that, according to his daughter Linda, National Midget Racing Hall of Fame and United States Auto Club (USAC) Hall of Fame inductee Bob Higman took apart his first 110-cubic-inch Offenhauser engine when Leroy Warriner drove for him in his #67 Kurtis-Kraft midget car back in the mid-Fifties.  The Romney, Indiana, owner/mechanic wrapped each piece in newspaper and marked each one, so he would know how to put it back together.  Bob Higman went on to win USAC midget car titles with Bob Wente in 1963, Mike McGreevy in ‘66 and Larry Rice in ‘73.**

Any (and all) criticisms and notes are welcome at iowabasedtraveler@yahoo.com.  Thanks!